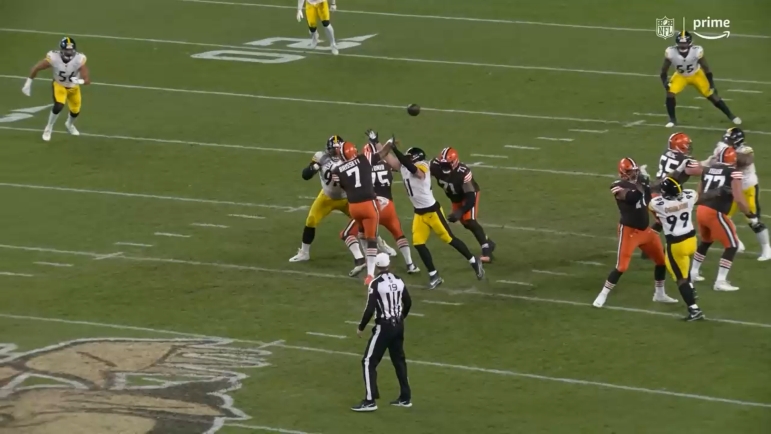 During his press conference today, Pittsburgh Steelers defensive coordinator Teryl Austin explained why the Steelers haven’t blitzed as often this year as they have in years prior.

“I think it’s more the way things have played out. Obviously, we’ve had some injuries in the secondary. When you do that and you lose some guys, maybe you don’t want to expose them as much. So, we had to mix up and maybe change up and do some things a little bit differently than we normally do. But I think if the situation calls for it and we need to, we’ve got to be able to get after people and blitz them. It just hasn’t worked out that way,” Austin said via official transcript provided by the team.

In the secondary, Minkah Fitzpatrick, Terrell Edmunds, Levi Wallace, Ahkello Witherspoon, and Cameron Sutton all have missed at least one game this season. Pittsburgh’s secondary depth consists of James Pierre, who struggled as a starter last year, along with an untested (at the time) Josh Jackson and second-year pro Tre Norwood. It would make sense for Pittsburgh to look to add extra help in coverage so quarterbacks can’t pick apart an injured secondary, and it’s definitely possible things could be different if Pittsburgh was healthier.

Compared to last year, Pittsburgh’s blitz rate is actually slightly up. With T.J. Watt in 2021, the team blitzed 26.1% of the time. This year, it’s at 26.9%, but that number is still down considerably from 2020 when the Steelers blitzed 35.6% of the time. Watt was so effective at getting to the quarterback last season that the Steelers didn’t need to send extra rushers via blitz, but with Watt sidelined, the Steelers are struggling to get to the quarterback.

Pittsburgh has just 12 sacks this season, and seven of them came in Week 1 with Watt healthy. The Steelers’ defense has had at least 50 sacks each of the last six seasons, but that number looks like it’ll be very hard to reach in 2022. The fact they aren’t blitzing very much is definitely a contributing factor, but the lack of Watt is clearly felt.

Austin also talked about Pittsburgh’s strategy when it comes to blitzing Philadelphia Eagles quarterback Jalen Hurts, who’s also one of the best running quarterbacks in the league.

“I think, like anytime, with a mobile quarterback, you have to pick your spots because if they pick it up or he gets outside or finds a seam, then it becomes a huge play. I think, like any time, we try to pick and choose when the right times will be. Sometimes we’re good, sometimes we’re not so good, but that’s always the challenge, every week,” Austin said.

Pittsburgh has faced some mobile quarterbacks this year, namely Zach Wilson, Josh Allen and Tua Tagovailoa. Against that group, Pittsburgh has mustered just one sack, against Wilson and the Jets in Week 3. Allen is probably the biggest threat with his legs out of that group, and Pittsburgh didn’t land a single quarterback hit on him. Hurts is a notch above Allen when it comes to using his legs, as he has had at least nine rushing attempts in every game this season and at least 20 yards on the ground. If the Steelers struggle to get to Hurts, he’s going to hurt them with his legs in addition to his arm. As Austin says, the answer might not be blitzing more but rather picking and choosing when to blitz, but however they do it, the pass rush unit has to be effective for the Steelers to have a chance on Sunday.