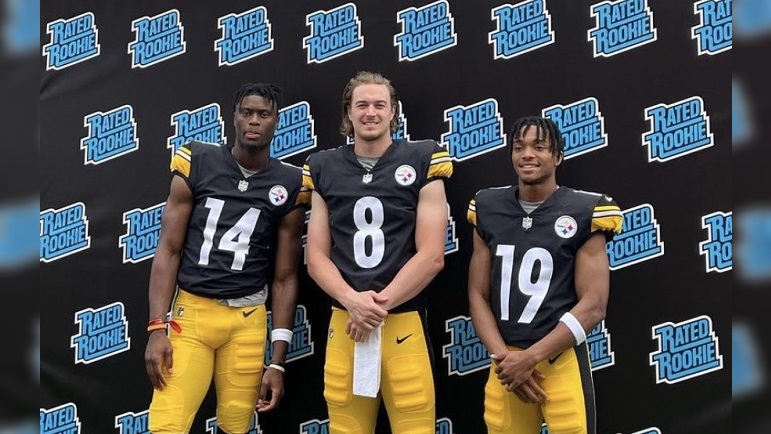 One of the Pittsburgh Steelers more surprising draft moves in 2022 was drafting two receivers in the first four rounds. After drafting receiver George Pickens out of Georgia, General Manager Kevin Colbert took Calvin Austin III out of Memphis in the fourth round in his last draft, also reportedly stealing him from the AFC North rival Baltimore Ravens.

Austin, who makes up for being relatively undersized for the position with unique speed and a 4.32 40-yard dash, sustained a foot injury in training camp, starting the season on IR. Having recently been removed from IR, he returned to practice on Wednesday, right in time to play alongside fellow rookie Kenny Pickett after being promoted to start at quarterback. Austin was asked about Pickett on Wednesday in a press conference after his first practice back.

“We spent a lot of time together,” Austin said when asked about his relationship with Pickett. “Just from having rookie premier, rookie mini camp. After the vets left, the rookies had to stay a couple extra weeks. So, we spent a lot of time off the field hanging out, getting food, and stuff like that. At this point, we have a really good relationship and I think it can translate right to on the field as well.”

There are few things that garner optimism for the future from an NFL fan base than a rookie-to-rookie quarterback-receiver connection thriving early. This is the case with Pickens, who had his best outing to date with Pickett taking over in the second half against the New York Jets. As Austin mentioned, he and Pickett have had many opportunities to develop chemistry. During training camp, Austin earned high praise of Pickett, who stated that he is “tough to cover.”

“I would say somewhere in between because he’s very normal,” Austin said when asked if Pickett is a normal or football-obsessed quarterback. “But you can tell, when it’s football, he’s for real and demands everybody to be on point with him.”

Being a likable teammate off the field, as well as a serious one on the field, is the ideal recipe for a franchise quarterback. It is still early, and Pickett has a lot to prove. However, this praise from Austin is certainly a good sign. Whether the duo develops a connection will remain to be seen, but there is reason to be optimistic.

If there is one thing the Steelers’ offense is missing this season as well as the previous few, it’s a consistent deep threat for the defense to account for. It is no mystery that this offense has suffered from the lack of big plays that it once had with receiver Antonio Brown in recent years. If Austin indeed becomes the deep threat the team is vying for, it will also allow the short and intermediate passing games more success. Given the inconsistent play from the position that the team is suffering from, Austin has the opportunity to step in and make an impact, and he will do so with his fellow rookie.