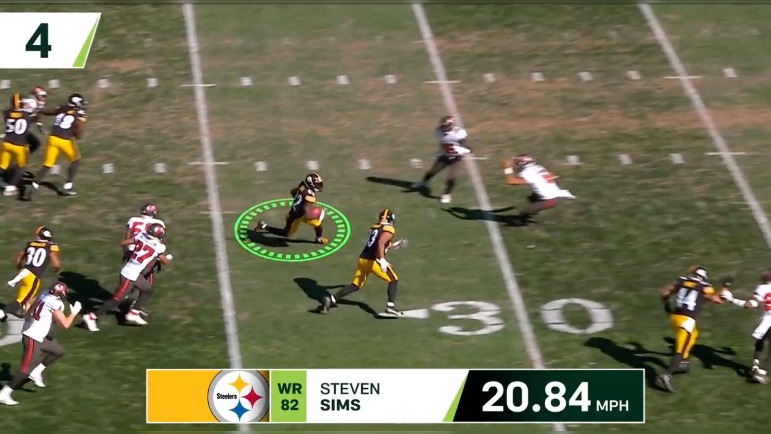 The Pittsburgh Steelers decided to shake up the starting lineup couple weeks ago, opting to switch out return specialist Gunner Olszewski for Steven Sims on the team’s kick and punt return units. The move came after Olszewski made multiple mistakes in the Week 4 game against the Jets, prompting Pittsburgh to go with Sims who also had return experience in the past and latched onto the 53-man roster after proving himself as both a returner and receiver in the preseason.

However, Sims suffered an eye injury prior to the team’s Week 5 matchup at Buffalo, causing him to miss most of the contest and prompted Pittsburgh to use CB James Pierre in his stead. Sims eventually returned to Sunday’s game and returned one kick for 19 yards, and when Tomlin was asked about Sims prior to their matchup with the Bucs, he stated in his press conference that Sims would be their return man should he be healthy enough to go.

Sims did get a helmet on Sunday and made the most of his opportunity, returning three kickoffs for 112 yards with a long of 89 yards on the day as well as returning three punts for 23 yards with a long of 24. Sims’ return of 89 yards to open the second half put Pittsburgh on the Tampa Bay 12-yard-line, setting Pittsburgh up in great position to puts points on the board to start the third quarter. Sadly, Pittsburgh’s offense went three-and-out, and Pittsburgh settled on a field goal to extend the lead 13-9.

.@StevenSimsJr with some space to open the 2nd half! #HereWeGo

While Steven Sims’ big return may have been overshadowed by the performances of Mitch Trubisky and Chase Claypool in this game, NFL’s Next Gen Stats made sure to credit Sims for his impact play, recording him with the fourth-fastest speed, hitting 20.82 MPH on the 89-yard kickoff return.

Sims comes in just above Jacksonville Jaguars RB Travis Etienne with a top speed of 20.52 MPH and behind RB JaMycal Hasty, WR Tutu Atwell, and WR Jalen Reagor who claimed the top spot hitting 21.25 MPH on a punt return attempt against the Miami Dolphins.

Sims said after the game that he felt that his big return brought some much-needed juice coming out of the half, which was true as his efforts set up Pittsburgh in scoring range even when the offense sputtered. Hopefully, Sims can continue to provide a spark on special teams that this team so desperately needs while the offense continues to work out the kinks as Kenny Pickett gets his feet wet in his first NFL season.