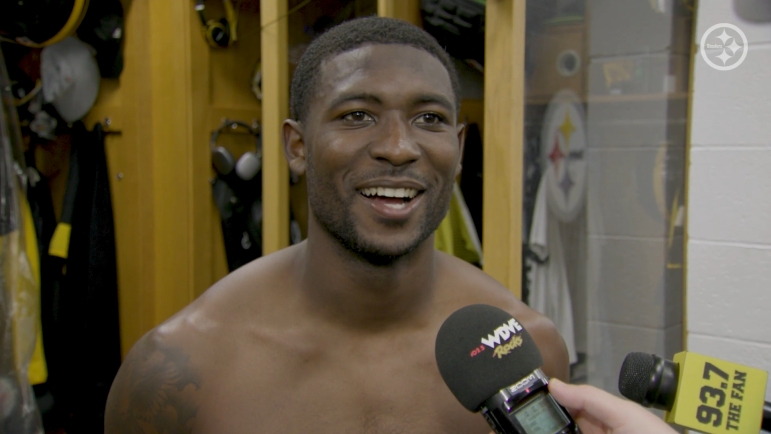 Imagine you’re a fringe guy on the roster. Imagine that you just spent a year on the practice squad after your previous team let you go, and you finally make the 53-man roster, even if you’re a healthy scratch. Imagine your opportunity comes—and then your quarterback hits you in the eye an hour and a half before kickoff.

That’s what happened to the Pittsburgh Steelers’ Steven Sims, the former Washington Commanders wide receiver, a few weeks ago. While he made the 53-man roster this year after spending the 2021 season on the practice squad, he was the sixth man and the backup returner behind Gunner Olszewski. The latter struggled and got benched, and so it was Sims’ turn.

“I got hit in the eye with a ball”, he told reporters yesterday, albeit a story he has previously told. “Kenny [Pickett] threw me a ball, it slipped through my hands, hit me dead in the eye. I thought I wasn’t gonna be able to see again. I was kind of scared. But it got better”.

He ended up being listed as questionable to return to the game before the game even started, and he wasn’t ready for the first returns, but he did play, and he was able to break off some nice returns. But, he admits, “I was definitely feeling like Stevie Wonder out there”.

That was evidently what he spent the next week hearing in the locker room. “I was getting the jokes all week when I had the glasses on”, he said with a smile. Even during his interview yesterday, a teammate called out “Stevie Wonder!” in the background.

A former college free agent, Sims did have some success in Washington in 2019-20 before not making the roster last year. He dressed for one game for the Steelers last season as a practice squad call-up. This year, he has only had the chance to play in two games, missing last week due to a hamstring injury, but hopes and expects to be out there Sunday and back in his return job—now with both the eye issue and the hamstring issue nearly behind him.

But he won’t soon forget that eye injury that initially caused so much concern. “It was pre-game. It was still an hour and a half before the game when it happened. It was unfortunate, but everything happens for a reason”, he said. “Yeah, I keep [my helmet] on now. I’m kind of scarred for life”, adding with another smile.

Outside of Diontae Johnson, Chase Claypool, and rookie George Pickens, the Steelers have only completed one pass to any other wide receiver this season, that being to special teams ace Miles Boykin. The opportunity is there now for Sims, especially after Calvin Austin III was left on the Reserve/Injured List to end his rookie season. And this time he’ll keep his eyes open—but not without a helmet.