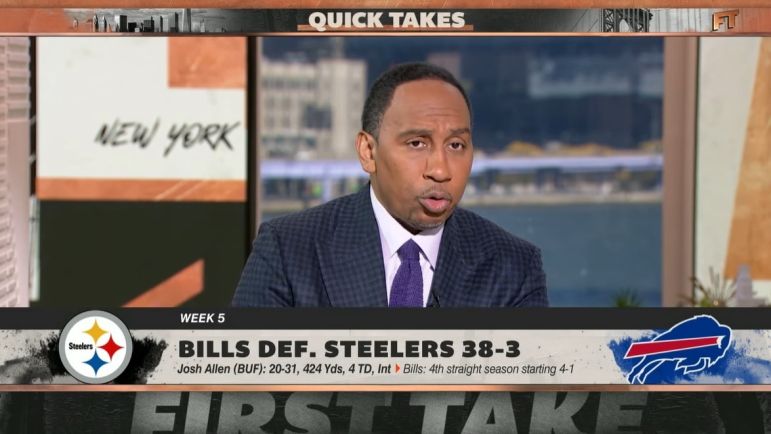 This is far from an ideal time to be a fan of the Pittsburgh Steelers. After a narrow 38-3 loss to the Buffalo Bills, the teams’ largest margin of defeat since a 51-0 loss to the Cleveland Browns in 1989, Steelers Nation may have to face the unfamiliar reality that the Steelers are a below average team. Stephen A Smith of ESPN, a self-proclaimed long time Steelers fan, commented on the loss on Monday, and did not mince his words and frustration.

“The Steelers will be lucky to win seven games,” Smith said on ESPN First Take Monday. “They are an atrocity, this is the worst team I’ve ever seen Mike Tomlin have. It’s primarily because you found a quarterback, he’s just a rookie, and the offensive line is putrid. At the end of the day, the coaching doesn’t look great today either. Brian Flores was added to that staff, we know Mike Tomlin is there, Kevin Colbert, the old GM, left them in a bad spot.”

Diagnosing the loss as an all-around shortcoming from coaching to lack of talent and execution is correct. Rookie quarterback Kenny Pickett, while he looked good early in his first start, did not receive enough help from his receivers or play-callers. Despite a clear ineptitude in the team’s rushing attack, offensive coordinator Matt Canada did not stop calling runs in early downs, leading to several quick three and outs. Against an All-Pro quarterback in Josh Allen and his offense, punting may as well be a turnover, especially given that the Steelers’ injury-riddled defense clearly struggled to contain him.

The team’s old general manager Kevin Colbert is an odd name to mention in blame, as the team arguably has no shortage of talent. In Week 1, the Steelers’ defense looked like a top unit until the injury to reigning Defensive Player of the Year T.J. Watt. Moreover, the one glaring issue that Colbert had to address on his way out — finding a successor for Super Bowl champion quarterback Ben Roethlisberger — was addressed in the first round.

“This is the worst Steelers team that I’ve seen in probably a quarter century,” Smith continued. “It was like Josh Allen was playing seven-on-seven yesterday.”

Outside of head coach Mike Tomlin’s well-known streak of having no losing seasons, the franchise has not had one since 2003, when they went 6-10 and subsequently drafted Roethlisberger. Indeed, this may just be the worst team since then, if not longer.

However, it is still only Week 5. There is time, and while there does not appear to be hope, it is still possible. After all, the team started the 2019 season 1-4, and went on to be in playoff contention until the end with Devlin Hodges and Mason Rudolph rotating at quarterback. If Tomlin is able to turn this team around, it may just go down as one of the best coaching jobs in recent memory, and likely his personal best.