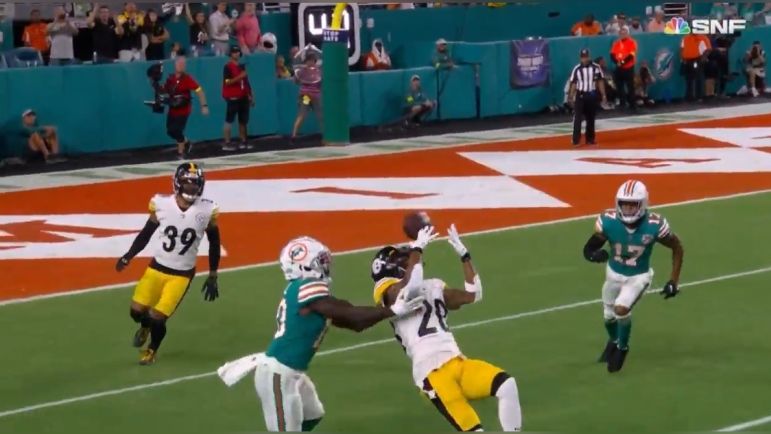 Though the Pittsburgh Steelers’ defense held firm after a bumpy start in Sunday night’s loss to the Miami Dolphins, there’s always room for improvement. One of the most critical missed opportunities they had to pick up their lackluster offense included four dropped interceptions that could’ve turned the tide of the game. Speaking to reporters Thursday, DC Teryl Austin says no stone is unturned, and finishing those chances is something the team works on during practice.

“You absolutely address it, and you absolutely work on it,” he said via a team transcript. “It’s no different than any other phase of your game. If you have something that you come up deficient with, you make sure you attack it, you try to fix it, you do the things you can to work on it so that it doesn’t show up again. And that’s our goal.”

Hired by Pittsburgh in 2019, Austin immediately brought a turnover-focused mindset to the Steelers’ facility with his turnover circuit drills, something we pointed out back when he was first brought onboard. Here’s what we observed about Austin’s handling of the defense during his first camp with the organization.

“Early in practice, new defensive assistant Teryl Austin put all the defensive backs on the JUGS machine. It went like this.

Five receptions of planting and driving downhill. Half speed, nothing too crazy, but getting closer to the machine each time. Work on playing off coverage, finding the ball, and driving on it. They did nine more going side to side. Jog left, catch, jog right, catch. Back and forth, each player, until the line was complete. The defense jumped on the JUGS machine after practice too. Vince Williams was the first man on it and they rotated through.”

In a coaches clinic he held years ago, Austin said it was a yearly goal for his defense to finish top five in takeaways. Pittsburgh obliterated that mark in 2019, finishing tops in the league with 38 takeaways. It was a similar structure, a defense needing to carry a lifeless offense. Things haven’t been quite as good in 2022, the Steelers with ten takeaways, with half of those coming in the Week 1 opener. Pittsburgh dropped four interceptions against the Dolphins, including potential game-changing moments from Terrell Edmunds and Cam Sutton. For Austin, it’s a point of emphasis during this week of practice.

“Our guys were more disappointed than anybody that we didn’t come up with them, but okay, how do you fix it? Complaining about it, bitching about it doesn’t fix it. What fixes it? Doing stuff in practice, doing stuff out here on the field to help you catch the ball.”

Creating turnovers will be a challenge this weekend against the Philadelphia Eagles. They’ve turned the ball over a league-low two times this season. Every other offense has given the ball away at least five times, meaning the Eagles are doing an exceptional job of taking care of the football. But for Pittsburgh to pull off the upset, splash plays are essentially required. Capitalizing on any chances the Steelers get this weekend is an absolute must.