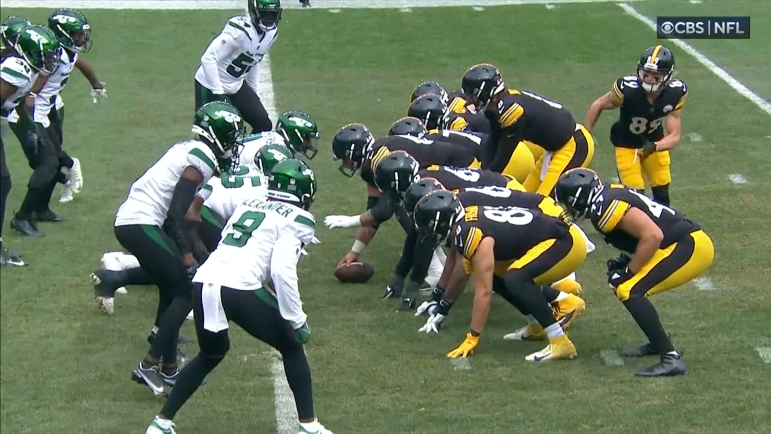 Winners and losers from the Pittsburgh Steelers 24-20 loss against the New York Jets Sunday afternoon.

Kenny Pickett – This one feels a little mixed. Pickett came in for Mitch Trubisky in the second half and provided a massive spark for the Steelers’ offense both in terms of atmosphere and crowd noise. After throwing an INT on his first career pass, Pickett got the ball back off a Minkah Fitzpatrick INT and snuck the ball in for his first touchdown. He led another TD drive the next possession highlighted by a wicked strike to Pat Freiermuth on third down that led to Pickett keeping it himself on a boot to the right.

But Pickett threw an ugly INT on his second throw that helped propel the Jets’ comeback. And that one hurt a lot. Pickett provided better offense than what Trubisky was doing but the hype of him playing well early on shouldn’t allow you to forget that throw. A light winner, I suppose, and certainly up for debate.

Chris Boswell – Boswell is legitimately the team’s best offensive weapon. Him and Minkah Fitzpatrick. Sorta sums up the Steelers’ offense. Boswell provided the first half points with makes from 51 and a whopper from 59 to close out the half. The latter tied his career long and was easily the longest he’s made in Pittsburgh. Off a rainy weekend and Pitt/Georgia Tech game played last night, field conditions weren’t great but he made things look easy. The only blemish was a kickoff out of bounds

First Half Offensive Penalties – Far too many of them. It ran the gamut from false starts to illegal hands to the face to illegal shifts to (another) ineligible man downfield call on a RPO, at least the third this season. They picked up their fourth late in the third quarter. Mistakes that stunt an already bad offense and helped limit them to just six first-half points. Can’t have that going forward.

Alex Highsmith – Highsmith could’ve finished the day with a couple of sacks but he missed a couple chances against the mobile Zach Wilson. Still, Highsmith dominated the Jets’ woeful tackles, hammered by injury including losing rookie Max Mitchell mid-game. Highsmith also pursues the run hard and helped impact the run game. He now has 5.5 sacks on the season after putting up six all of last year.

Pat Freiermuth – Freiermuth was his trusty, secure self, consistently making plays in the middle of the field, including a couple of nice grabs on over/crossing routes. He finds the soft spot against zone coverage and routinely makes contested grabs. His run blocking seemed improved, too.

Should also note George Pickens was excellent in this game, going for over 100 yards. He made some great sideline grabs.

Minkah Fitzpatrick – Just put his name in pen before the game. Fitzpatrick is a game wrecker week in and week out, sparking this team with an interception off a tipped pass to set up Pickett’s first rushing score. It was nearly a pick-six. He worked well as a robber to take away underneath throws and nearly had a second pick – which would’ve been a TD – in the fourth quarter off Wilson. His steady tackling continues to be an underrated element of the game.

Pressley Harvin III – Harvin’s inconsistencies continue and his highs aren’t even all that high this year. He had multiple JV punts in this game, including a 35-yarder from his own 19. You have to wonder if Pittsburgh would consider making a change. If Harvin is struggling now, imagine what things could look like when the weather actually gets bad. And this offense, even with Pickett, still needs a good punter to play field position.

Diontae Johnson/Chase Claypool – As quiet as it gets for both guys today. Anything we’re saying about them isn’t anything good. Both were shutout for catches through the first 50 minutes of the game. Johnson had a slant go through his hands – perhaps the pass was tipped or his vision obscured by the dropping DT – but it’s a play he has to make. Claypool lost out on a jump ball to a 5’8 safety on Pickett’s first INT. Perhaps not the best throw but those are situations Claypool was drafted to win in. Claypool was held off the stat sheet while Johnson had just two short grabs on the day.

OT Pass Pro – The o-line held up well in pass protection the first three weeks of the season. Less so today. The tackles in particular, Dan Moore Jr. and Chukwuma Okorafor, had their issues and will probably be charged for sacks later in the week.

Gunner Olszewski – Not a good day overall for the Steelers’ wide receivers. Mitch Trubisky isn’t the only player at risk of losing their job long-term. Olszewski fumbled a punt, his second of the season, that CB James Pierre thankfully recovered. Olszewski has done little to create impact plays in the return game and he got popped by LB Kwon Alexander on a jet run for no gain.

Mitch Trubisky – Trubisky’s poor stats shouldn’t be considered a perfect reflection on his play, he was better than the numbers suggest, but still, it wasn’t great. His pocket presence has been a problem and he runs himself into too many pressure and sacks, including in today’s game. And bottom line, a QB’s job is to put up points. Trubisky failed to do so. And so he was benched. I doubt he’ll get his job back next week, either.

Fourth Quarter Defense – No bones about it. The Steelers’ defense collapsed down the stretch. Lack of a pass rush, poor run defense, a unit that just didn’t get stops. We can talk about the Steelers’ turnovers and offensive miscues but the defense just needed to make a stop and they would’ve won this game. This unit failed. And it may basically mean the end of their season.