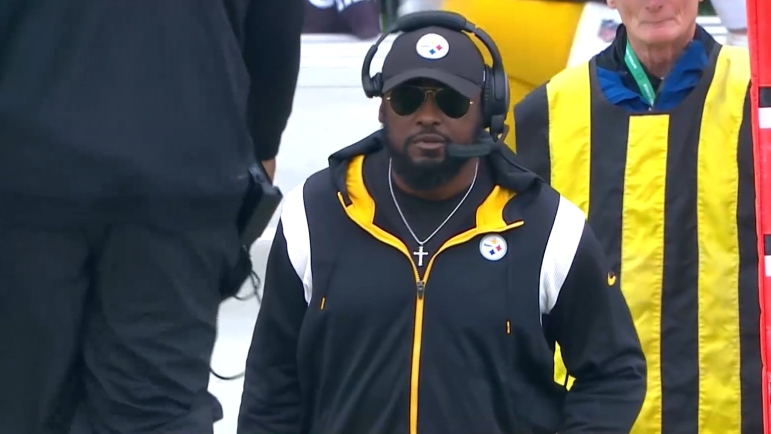 As we’ll do every week to get you ready for the upcoming game, our X-Factor of the week. Sometimes it’s a player, unit, concept, or scheme. Here’s our X-Factor for Sunday’s Week 5 game against the Buffalo Bills.

Football is a chess match. And when you’re the underdog as the Pittsburgh Steelers are this weekend, the biggest line against them ever, you better win with brains and not just brauns. That’s partially how Pittsburgh got ahead last year in their upset win of the Bills. The blitz-happy Steelers went conservatives and chose not to go after Josh Allen with extra people. In last year’s game, they blitzed just 13.2%, their second lowest rate of any game last season. Allen looked moral, completing under 60% of his passes, averaged just 5.2 YPA, and fired only one TD pass.

Appearing on The Pat McAfee Show after that game, Mike Tomlin was asked about his winning gameplan.

“I think that Josh Allen and company wanted us to blitz. And so we chose not to.”

Speaking to reporters this week, Allen admitted Buffalo gameplanned for Pittsburgh to blitz. The Steelers didn’t oblige and the Bills struggled to adjust, blowing a fourth-quarter lead and collapsing late.

So that begs the question – what will the Steelers do this year? Go with what worked last season, not blitzing, or mix it up again, try to stay one step ahead, by rushing more aggressively. Does Buffalo plan for a coverage-based defense that rushes four and drops seven? Or do they try to get ahead of Pittsburgh’s potential counter and build their gameplan against a blitzing attack.

Truthfully, I have no idea. It could really go either way. So far this season, the Steelers have continued to stray away from blitzing, being far more selective than they used to. But they’re also coming into this game knowing they had T.J. Watt as part of that four-man rush last season. No such luck this time around. And trying to get home with this group of four has been a problem. Their pressure rate is in the tank. Aggression brings risks but dropping back and trying to play “safe” against this potent Bills’ team feels like a slow-death.

Tomlin did seem to hint at what his plan would be this time around, a more aggressive approach.

That thought was more in an effort to contain Allen’s scrambling ability but it’s sending five all the same. Tomlin went on to say, and it’s probably the only assessment to make, is the Steelers will try to do a combination of both. There isn’t a one-size-fits-all approach to beating a tough team like the Bills and generally, all teams try to mix up man/zone, blitzing/coverage. But in general, a more aggressive, blitzing identity, call it around 30%, is probably the best gameplan for this week. How Pittsburgh decides that approach and of course, how well they execute it, is at the top of my list this weekend.