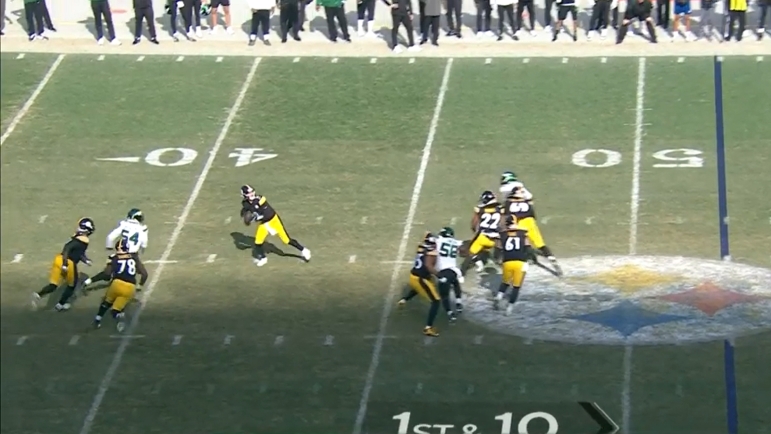 It felt like just another week as a Steelers fan through one half of week four, losing to a seemingly inferior opponent and hardly any output from the offense. Even after some luck had finally swung the Steelers’ way in the way of a roughing the passer penalty that set up a Chris Boswell 59-yard field goal before halftime, the energy inside Acrisure Stadium was about as high as an October Pirates game in PNC Park.

That was until it was announced that Pittsburgh’s knight in shining armor, Kenneth Shane Pickett, was going to be making his official debut under center entering the second half.

Coming into the game I was still under the impression that Mike Tomlin had no intentions of benching starter, Mitch Trubisky. That changed for me when I saw this clip on the CBS broadcast of Pickett, helmet on, next to Tomlin getting coached up during the Steelers’ opening offensive drive.

While it was a colder day, I hadn’t seen Pickett’s helmet on during the game yet this season. This seemed a lot more like a “you stay in my hip pocket and stay ready” type move than a coincidence. And after trotting Pickett out there in the second half, it proved it likely wasn’t one.

The excitement of seeing Pickett take the field quickly subsided as his first career pass resulted in an interception, due in large part to Chase Claypool not fully extending his arms and attacking it at its highest point.

However, the Steelers’ defense responded with an interception of their own to put the offense in great scoring position on their first of two back-to-back touchdown drives behind the legs of their new hometown hero.

Was criminal for the CBS production crew to miss this moment live. #Steelers pic.twitter.com/NzIU7xmSBw

Acrisure Stadium was rocking. The Steelers had scored 20-straight points to go up 20-10 with only 13 minutes left in the game, very much in the driver’s seat to put this game away and let Pickett’s relief job at quarterback be remembered in the hearts of Steelers Nation forever.

However, we now know it wasn’t meant to be. Now-retired, legendary Pittsburgh sports writer, Ed Bouchette, may have said it best, “not all fairytales have fairytale endings.”

Not all fairytales have fairytale endings

The Jets offense would respond as the Steelers defense found itself in the same place it had in numerous games already during this young 2022 season, not being able to get offenses off the field in the fourth quarter. After an 11-play, 81-yard drive, the team from the Big Apple was able to find the end zone and bring the game back within three points.

It was now time for the Steelers first-round draft pick to answer yet again for this offense and effectively put this game on ice.

It seemed like he was going to, too, after this third-down back shoulder throw to fellow rookie George Pickens. The connection took the offense down to the Jets’ 31-yard line and looked to be well on their way to closing the game out.

It now brings us to our turning point in the game.

Directly after the completion to Pickens, Matt Canada ran my least favorite play in football, a toss. While it was successful earlier in the day with Jaylen Warren, too many bad outcomes can occur on tosses to warrant its use, in my opinion. One of those negative outcomes is shown here as Pickett gives Warren too soft of a toss and he’s not able to corral it.

Pittsburgh was lucky this didn’t turn into a fumble, for one more play anyhow.

Due to being behind the sticks, the Steelers stay aggressive and pass. As I’m sure you all know what’s coming next, Pickett is unable to find anyone downfield and throws a ball late to the flat to tight end Pat Freiermuth. He’s unable to bring it in and volleyball sets it up in the air, falling into the waiting arms of a nearby Jets defender.

There’s certainly blame to go around, Freiermuth probably should have caught this, but Pickett draws his own blame for not just sailing this one over Freiermuth’s head.

Pickett said that much himself after the game.

Pickett on the second INT:

"I wanted it higher than that there."

Added that clock was their friend there, and that he can't make that mistake. A learning experience for him moving forward. #Steelers

It’s a rookie mistake from a guy that showed a lot of promise in his debut. Unfortunately, those two back-to-back plays are what fully changed the tide of this game.

The Jets were able to run off all but 16 seconds of the game clock on their final touchdown drive that ultimately won the game.