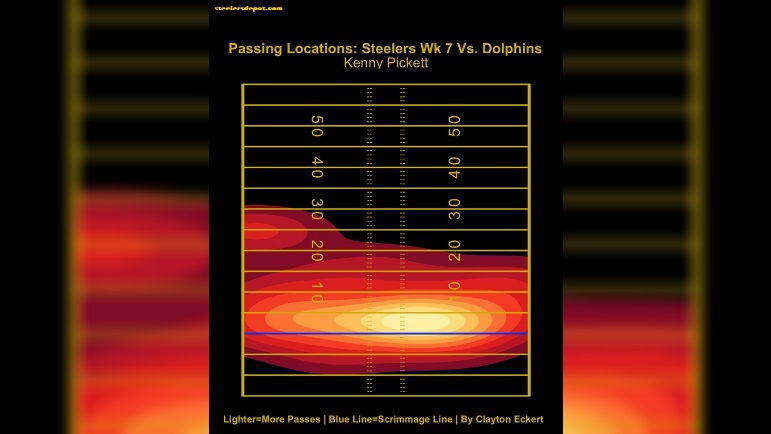 Week seven in the books, and it’s time to provide my quarterback passing locations charting for the game and the regular season thus far. In case you missed the previous articles, I will be charting, visualizing, and providing takeaways for the all-important quarterback position for the Pittsburgh Steelers. Thanks to Thomas Mock for his great article that helped me learn much of what I’m using today. Couple notes before we jump in. All yardage referenced are air yards from the line of scrimmage and bats at the line of scrimmage, spikes, and clear throwaways removed. This week’s charting has a throwaway and spike removed.

In quarterback Kenny Pickett’s third start, he went 32/44 on the stat sheet for 257 yards, one touchdown (the only one of the low 10-point game), two sacks, and three interceptions. The first interception was the play where wide receiver Chase Claypool was arguably interfered with and fell to the ground, the second a poor decision and throw where the safety easily undercut the predictable stop route by wide receiver Diontae Johnson (that the team runs excessively), and the third was the final play of the game with a route miscommunication with Johnson idly watching as the cornerback toe-tapped on the sideline for the takeaway that put the game away.

Pickett led a couple nice drives, one in the second quarter that led to the touchdown to wide receiver George Pickens on a great back shoulder catch and throw, and of course the final drive that put Pittsburgh in position to win. Though Pickett had an impressive 76.2% completion rate with the spike and throwaway removed (more on this later), I noted many more accuracy issues than last game along with miscommunications with receivers on routes. This was particular to Johnson in this game (catching only five of his ten targets) and on different pages on a few occasions. The connection was strong with tight end Pat Freiermuth upon his return from injury (9/10) and wide receiver George Pickens (perfect 6/6) following a week six game they struggled to get much going.

Let’s start with a simple view of the 42 charted passes, with number of throws and pass distances for week seven: 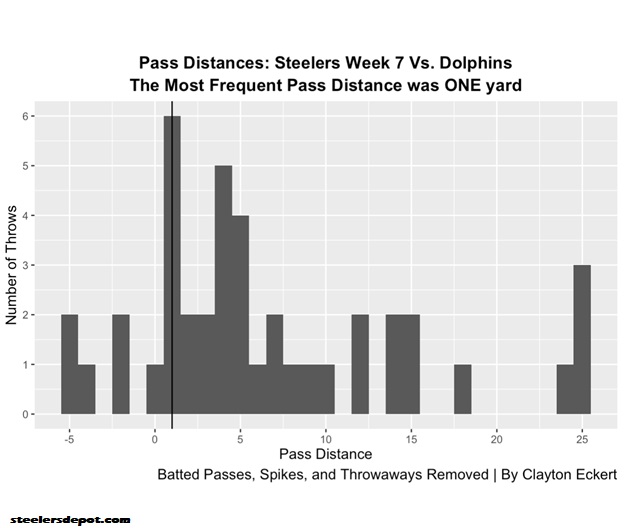 Right away we get more context to Pickett’s high completion rate, with 47.6% traveling 0-5 yards, and six of those passes traveling just one air yard. Believe it or not, this most common pass distance was over six percent less than last week. One example I enjoyed in particular was mid fourth quarter, where Claypool ran a short crossing route for the catch at three air yards, and able to get great YAC for the third and ten conversion on the 12-yard gain. Would love to see more routes like this, catching on the move as opposed to stationary routes (stops/comebacks) that limit YAC as we have seen much of the season. Here’s to hoping the slight YAC improvement as of late continues.

23.8% of passes went 5-10 yards, compared to 26.9% last week. A nice play at this distance was a slant/stop route to Pickens, getting open behind Freiermuth’s go route and running back Jaylen Warren in the flat, getting open in the soft spot of the zone. 16.7% of passes were 10-15 yards, down over ten percent from last week, highlighting the big difference in the passing distances between Pickett and quarterback Mitch Trubisky. Pickett has struggled overall when throwing past ten yards as I’ve highlighted but did enjoy a target to Freiermuth at this distance, utilizing him from the slot on an out route which would be nice to see more of moving forward. 11.9% of passes were behind the line of scrimmage, which is up from only 7.7% last game. Johnson had a nice play here early in the game on a screen, able to get good YAC that has been so rare this season (worst in the league for much of the year), setting up a third and short conversion. 9.5% were explosive passes, up from 3.8% last game. The highlight was the longest play from scrimmage to Pickens, who got open up the left sideline for the 30-yard gain, with the cornerback eying Pickett and allowing separation for the easy pitch and catch. The least common pass distance 7.1% were 15-20 yard passes, compared to 3.8% last week.

Here are the dots for the charted throws for week seven as we add more context: 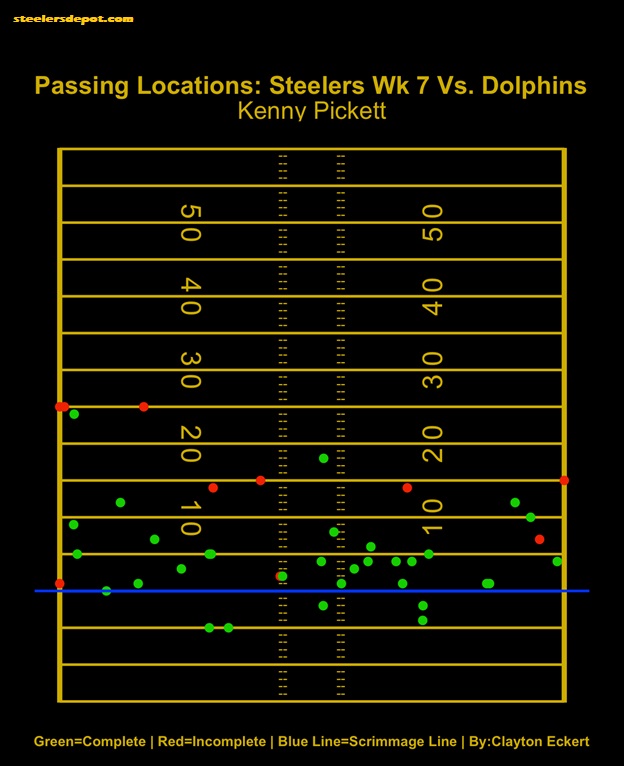 Same story, different week in many regards. The good news is Pickett was a perfect 5/5 behind the line of scrimmage, 18/20 from 0-5 yards, and 9/10 from 5-10 yards for an impressive 91.4% completion rate at ten yards or less. He went 4/8 in the intermediate range though, with an increase in quantity particularly between the numbers that many have been clamoring for, but unfortunately lacking in success. A miscommunicated route with Claypool, failing to get the pass over a linebacker that was tipped, and the poor read/throw for the interception were the low-lights, but we finally have a green dot between the hashes down the field that looks like gold (previously the only such throw was behind the line), on a great throw and catch for a huge fourth and six conversion late in the game! Also, only 1/4 on explosives (all to the left), with the Pickens long pass highlighted earlier the only completion. One incompletion was an overthrow to Johnson early in the game, and the other two fails were interceptions. 5/12 past ten yards (41.7%) and three interceptions, the struggles are clear. While I’d love to see a passing chart similar to quarterback Tua Tagovailoa (deep/middle of the field galore against Pittsburgh), it’s understandable and clear why we’re seeing what we are until Pickett grows with experience (knocks on wood). 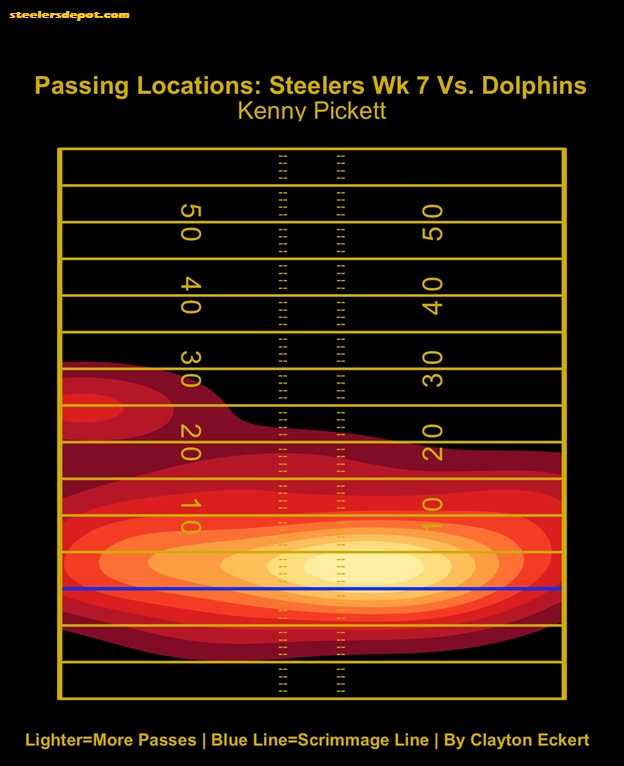 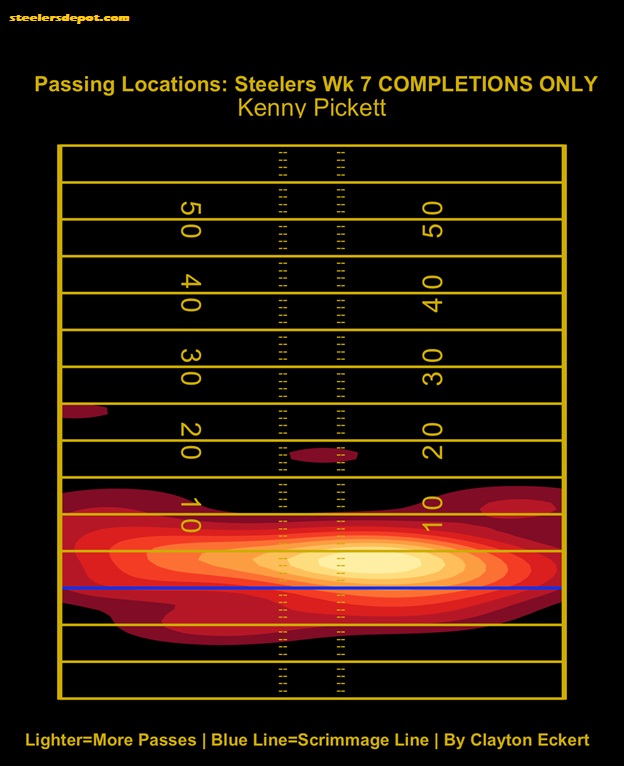 Healthier first chart for Pickett than last week, albeit on only 15 charted passes in week six. The most common passing area was from the middle to the right numbers at 0-5 yards, and was also 100% in this area and all the way up to ten yards. The completions only graph really puts into context the lack of downfield success, with only one explosive and three intermediate completions. That’s only four completions past ten yards, no wonder this team is struggling to consistently move the ball or score considering the struggling running game as well.

Now let’s look at the 240 charted throws on the season for Pickett and Trubisky: 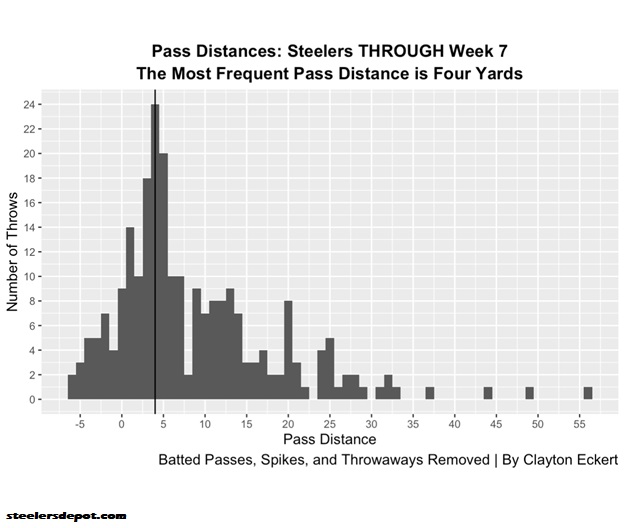 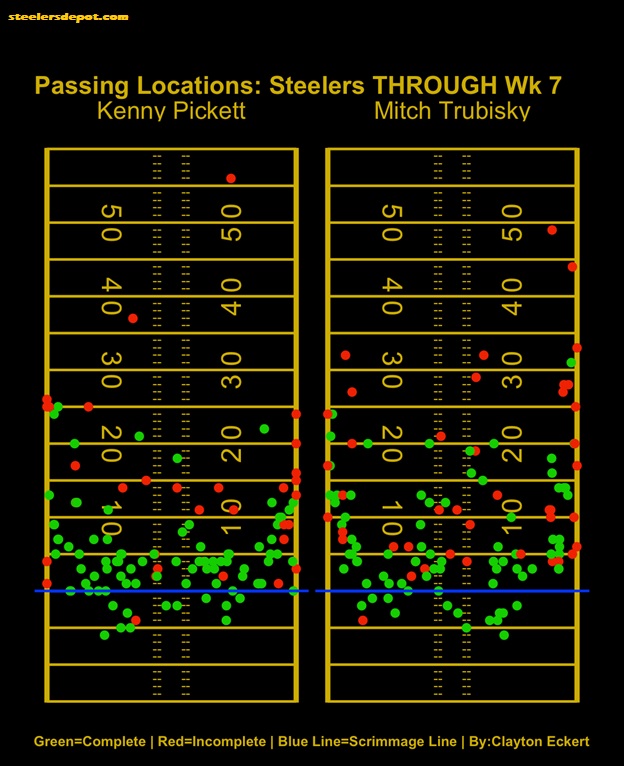 Some big differences and takeaways as Pickett’s sample size grows, and the quarterbacks now having virtually the same number of attempts (Trubisky 78/128 60.9%, Pickett 87/127 68.5%). Both quarterbacks are still highly successful behind the line. Each have a high rate of incompletions on the sidelines particularly to the right, with Pickett adding the majority of his to the left in this game. Pickett’s accuracy at ten yards or less is really accentuated by the visual, and also added more between the hash throws to the chart this week with a high completion rate. He has really struggled in the intermediate middle (10-20 yards at or between the numbers) at 2/8 thus far. Pickett is now 10/23 (43.5%) in the intermediate range overall, which is down a couple ticks from last week and from 50% following week five. The team is now 12/35 on explosives (34.3%), with Pickett at 5/13 (38.5%) which took a dive after a 44.4% mark following week six. In comparison, Trubisky is 7/21 to date (33.3%). Here’s to hoping Pickett’s high overall completion rate can trickle over to his deeper attempts, the facet of this offense that is in dire need of improvement. 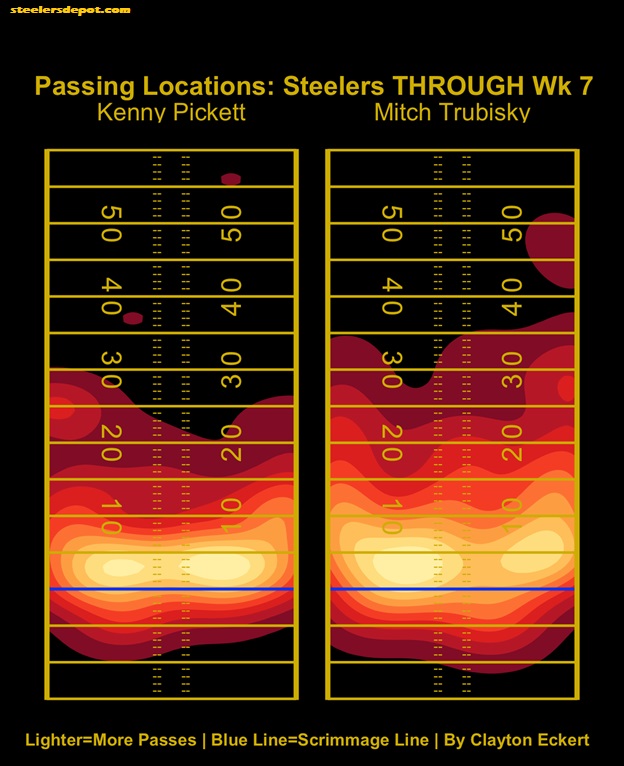 The heat maps for the season look very similar to how they did following week six. Pickett’s pass depths didn’t change much, except for a slight increase to the deep middle thanks to the refreshing Freiermuth catch highlighted earlier. He did add volume in the explosive range to the left, but lacking success overall with only a 25% completion rate (1/4). Pickett’s heat map looks very similar in regards to most common pass distances of 0-5 yards as expected, with the right side being the larger area with the high volume and success there last game as highlighted earlier. 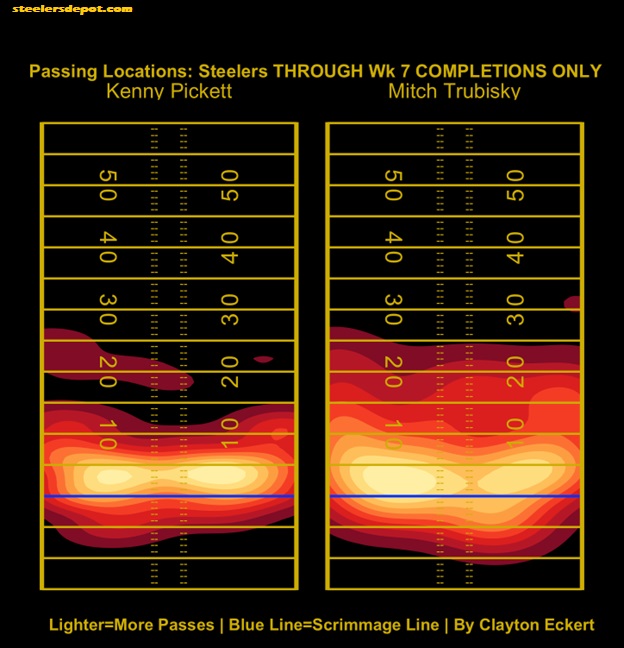 Here we see both quarterbacks charts taking the expected hit as usual, Pickett in particular with his longest completion still at 25 yards, and his chart noticeably going blank in the intermediate range. Trubisky’s longest completion was 31 yards, highlighting the team having no double explosive air yard completions on the season. Hopefully this can be accomplished soon, or even one of the non-air variety optimistically ending in the end zone, as the offense looks for any spark they can possibly find to get this offense going with the extremely tough challenge in the undefeated Philadelphia Eagles that awaits. 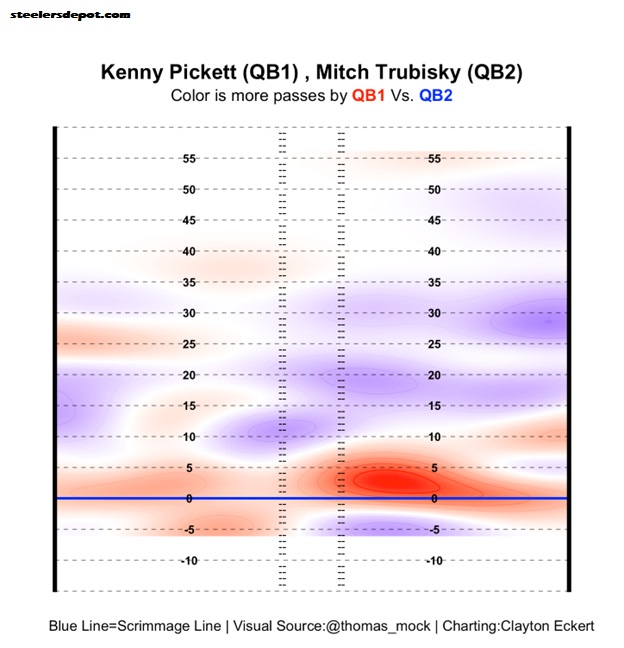 What are your thoughts of Pickett’s performance against the Dolphins? What about how the Steelers quarterbacks have compared to date? Thanks for reading and let me know your thoughts in the comments!