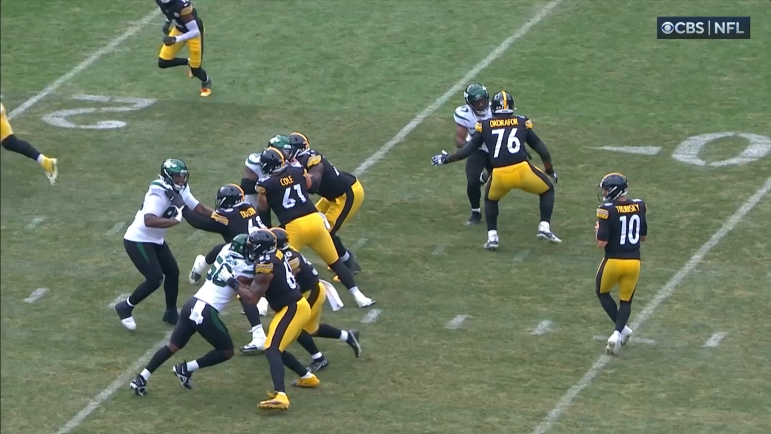 Through four games of the 2022 season, things have not gone the way many expected or even hoped on the offensive side of the football for the Pittsburgh Steelers.

Struggles under center, in the run game, with penalties and simply catching the football consistently have hindered an offensive attack that remains in a transitional period, especially now with the move to rookie first-round draft pick Kenny Pickett.

There’s been one constant though that has provided some hope and even excitement in some instances, that being the play of the offensive line under first-year position coach Pat Meyer. Each and every week the offensive line, which was much maligned throughout the summer and in the preseason for poor play, has found its footing and continues to get better and better in all facets.

According to Pro Football Focus’ positional rankings Wednesday morning, the offensive line is now in the top half of the league, moving up eight total spots from Week 3 to Week 4, landing at No. 13 overall in Sam Monson’s rankings, passing the likes of the Los Angeles Chargers, San Francisco 49ers, Minnesota Vikings, New Orleans Saints, Houston Texans, Tennessee Titans, and Jacksonville Jaguars in the move up from No. 21 overall.

Nice slab from Kevin Dotson on this rep. #Steelers pic.twitter.com/kvv6ocg5VD

While it is a ranking based mostly off of eye, Pro Football Focus continues to like what it’s seeing from all five starters on the offensive line in Pittsburgh, which has allowed the fewest pressures of any team this season. Last season, that was the case with the black and gold as well but was largely chalked up to how quickly Ben Roethlisberger got rid of the football.

This year, that’s not the case as the snap-to-throw time has regressed back towards league-average, meaning guys like Mitch Trubisky and Pickett are holding onto the football longer, putting more onus on the offensive line holding up in protection. So far, they have.

“Despite two different quarterbacks, neither rushing the ball out at the rate Ben Roethlisberger did last season, the Steelers’ line has pass blocked well and has surrendered the fewest pressures in the league,” Monson writes regarding the Steelers ranking at No. 13 overall. However, Monson did point out that overall the offensive line has just a 42.3 run-blocking grade.

That’s not ideal, but the unit appears to be finding its stride in recent weeks in the run game, a positive development for a stagnant offense overall.

Improvement has happened each and every week, which is what you want to see from a unit that underwent significant change this offseason. However, the biggest test of the season, to date, is coming on Sunday against the terrific Buffalo Bills’ front seven, led by future Hall of Famer Von Miller, and a pair of standout linebackers in Tremaine Edmunds and Matt Milano.

Buffalo ranks third in pressure rate on the season at 42.8%, but has the league’s lowest blitz rate (8.0%), meaning they’re able to generate a ton of pressure with a four-man front, something that will be a significant challenge for the young Steelers offense line and will be a good litmus test overall as to where they are in their development, especially in trying to protect the rookie in Pickett.