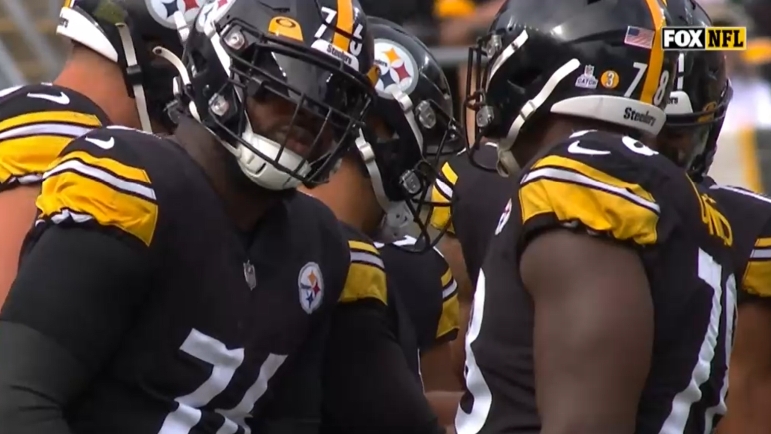 One week after taking a significant tumble down the rankings along the offensive line, the Pittsburgh Steelers put together a relatively decent performance in Week 6 against the Tampa Bay Buccaneers Sunday at Acrisure Stadium, helping the black and gold close out the 20-18 win with a much-needed four-minute drive that milked the clock away and closed out the win.

For its efforts, the offense line in the Steel City is gradually climbing back up the positional rankings from Pro Football Focus ahead of the Week 7 matchup with the Miami Dolphins.

Sitting at No. 22 after the Week 5 shellacking by the Buffalo Bills, the Steelers’ offensive line climbed up to No. 19 in the latest positional rankings from PFF, written by Sam Monson Wednesday.

The Steelers climbed back above the New Orleans Saints, Tennessee Titans and Bills in the rankings Wednesday.

“No member of the Steelers line allowed more than two pressures this past week against Tampa Bay. Chukwuma Okorafor surrendered the only sack,” Monson writes regarding the Steelers ranking at No. 19 overall. “The Steelers can have problems against an elite pass rush, but the line holds up well against anything else, given the offense the team runs.”

Coming into the matchup against Tampa Bay, Pittsburgh had a challenge on its hands as defensive tackle Vita Vea is viewed as one of the best interior forces in football, while edge rusher Shaquil Barrett led Tampa with 16 pressures on the season, not to mention the high blitz rate the Buccaneers used each week.

They even opened up some rushing lanes for second-year running back Najee Harris, providing some balance offensively, and played a key role late in the final drive of the game, helping the Steelers milk the clock and secure a much-needed win.

Moving up three spots is good progress for a group that just three weeks ago sat at No. 13. Things will fluctuate week to week, but for the most part the group is starting to truly gel and come together as a unit, which is great news for the Steelers. The next step is cutting down on the drive-stalling penalties, especially from Dotson.