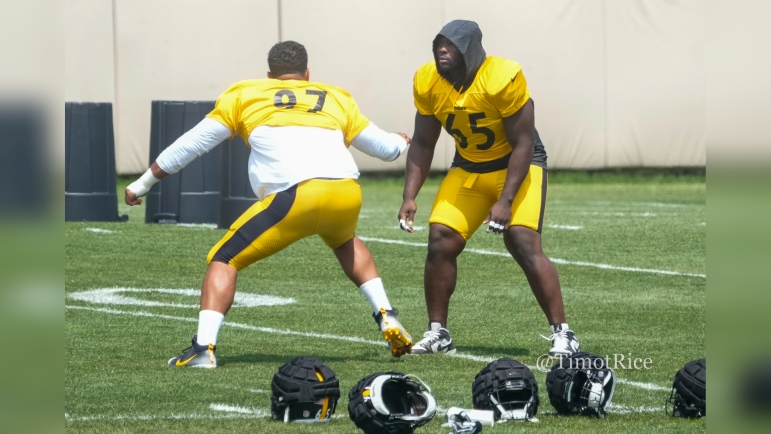 The Pittsburgh Steelers are 14 point underdogs in Week 5, the most in franchise history. This is not without merit, as the team prepares to face the Buffalo Bills on the road, a team with elite play on both sides of the ball. The Bills are led by All-Pro quarterback Josh Allen and a high powered offense, and are statistically among the best defenses in football. On the other hand, the Steelers are 1-3 and are starting a rookie quarterback. The team is playing without star linebacker T.J. Watt, whom they have never won a game without since 2017.

From the team not faring well when they are double digit underdogs to the record against the Bills, there is no shortage of statistics that show the Bills’ matchup advantages across the board. However, it is one game and anything can happen, and the Steelers do have one matchup advantage. That is, the Bills’ offensive line, especially on the interior, has been below average this season according to several metrics.

In run blocking, the Bills offensive line has the lowest efficiency in the NFL according to both PFF grading system and ESPN’s win-rate. The unit ranks better in pass protection, but remains below average according to both metrics. The Bills only run the ball 28.6% of the time, and actually trail the Steelers in EPA (expected points added) per play on the run. The Steelers, who have struggled late against the run in costly fourth quarter drives, will face a presumably weaker rush attack.

This raises the question of which individual matchups in the trenches favor the Steelers. Given that the Bills are likely to pass the ball early and often, it is important to delve into each players’ pass blocking efficiency. The Bills tackles, Dion Dawkins on the left and Spencer Brown on the right, have not been the team’s weakest unit, with the former being arguably the team’s best lineman and a commendable matchup against linebacker Alex Highsmith. That said, the team’s interior offensive line has not looked the part this season.

The Bills interior offensive line consists of center Mitch Morse, left guard Rodger Saffold, and right guard Ryan Bates. Morse and Saffold are both veteran players, neither of whom have performed well this season, the former having a 53.8 PFF pass blocking grade and the latter 51.1. Bates on the other hand was an undrafted free agent in 2019, and is relatively inexperienced and arguably their worst offensive lineman this season.

On paper, the Steelers have the opportunity to create interior pressure and disturb Allen and the Bills offense. Whether this will be enough, or happen at all, will remain to be seen. As was the case last year against Buffalo, the Steelers will need to pull something out of their bag of tricks.