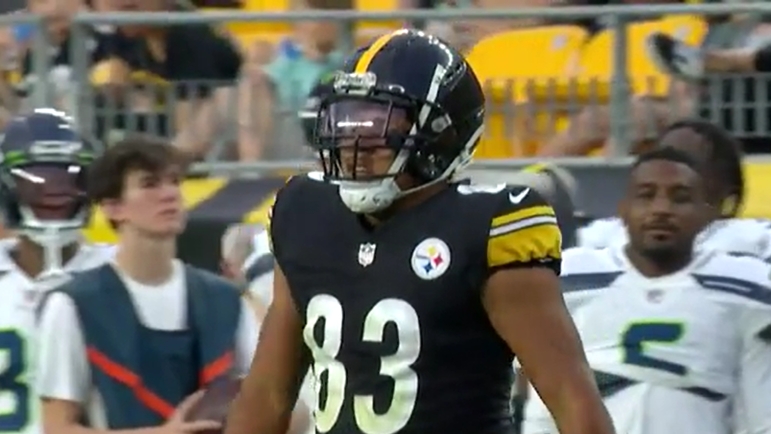 Pittsburgh Steelers sixth-round pick Connor Heyward made his first meaningful contribution to the offense on Sunday, hauling in his first two NFL receptions. Heyward, the younger brother of Steelers’ defensive lineman Cameron Heyward, doesn’t have the size of a typical tight end at 6’0″ and 230 lbs., making him incredibly small for the position. Still, he’s earned praise from offensive coordinator Matt Canada going back to the preseason, and Canada gave him credit again today for his readiness during last Sunday’s game.

“I thought Connor jumped in and made a couple plays Sunday that showed his readiness. We had him playing in very much of a spotty role here through the start of the season. We’ve got two tight ends that have played a lot of football for us that we count on, and Connor’s skill set is a little–going back to the question about Calvin — his role is a little bit different, he has a little bi of a different body than the other two guys. I thought he stepped in and made a couple plays and was ready to go, which is what you expect for a guy to be. So, happy with where he’s at and want him to keep trending the right way,” Canada said via an official transcript provided by the team.

With Pat Freiermuth suffering his third concussion in two years on Sunday and Zach Gentry also dealing with a knee injury (although he logged a full practice today), there could be more opportunities for Heyward to get involved in the offense. He hauled in both of his targets Sunday, and he had five catches for 30 yards on seven targets in the preseason. He has a role on special teams, but he could expand it to become more of a receiving threat on offense.

I don’t think Pittsburgh could rely on Heyward as a full-time starting tight end due to his size. I just don’t think he has the size to handle the blocking duties required out of an NFL tight end. In college, he played running back in addition to tight end during his career at Michigan State, and there was speculation his fit in the NFL would be as an H-Back or fullback. Pittsburgh has used him as a tight end, though, and he took advantage when given the opportunity on Sunday.

As a receiver, Heyward is capable, and that unique skill set and role Canada talked about suits him as a receiver, as he has a little bit more speed after catching the ball than either Freiermuth or Gentry. On the flip side, he isn’t as big of a target, and he’s behind the other two when it to the blocking aspect. I’m intrigued to see if he develops a bigger role with the injuries at the tight end, and how he’s deployed by the Steelers going forward.