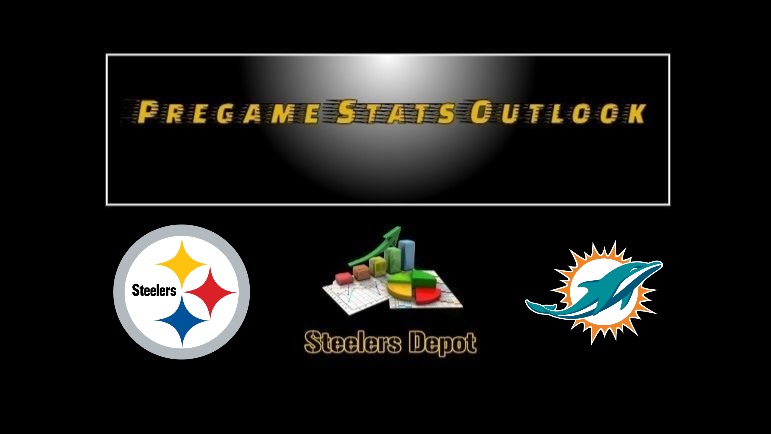 The Pittsburgh Steelers are attempting to move to 3-4 on Sunday in a road game against the Miami Dolphins. After a shocking upset against the Tampa Bay Buccaneers, where the team put on a defensive clinic and showed flashes of offensive improvement, they will look to build off the momentum. This is, in many ways, uncharted territory for Pittsburgh, as the franchise is not accustomed to slow starts. However, Tomlin has turned around teams with slow starts before, and this Sunday will be a big test. With that being said, here are five statistics to look for this coming Sunday.

2. This is the second time in the second time since 1970 history that the Steelers are 7+ point underdogs for three straight games. The first time took place in the 2000 season, as the Steelers were 7+ point underdogs from weeks 4-7 against the New York Jets, Jacksonville Jaguars, and Tennessee Titans. Interestingly, the team fared well in this stretch, beating the Jaguars and Jets while losing to the Titans. The 2000 Steelers were counted out by many before this stretch due to an 0-3 start, and wound up 9-7, a script that this Steelers team will try to emulate. The team will try to emulate this 2-1 record on Sunday against the Miami Dolphins.

5.38. According to Pro Football Focus, Miami Dolphins’ quarterback Tua Tagovailoa  has produced a turnover-worthy play on 5.38% of his plays, which ranks third in the NFL among qualifiers behind New York Jets’ quarterback Zach Wilson and Tagovailoa’s teammate Teddy Bridgewater. The Steelers are tied for third in the NFL with 8 interceptions on the season. The Steelers must take advantage of every opportunity for a turnover to limit possessions for Miami’s high-flying offense. Considering that Tagovailoa will be attempting to shake off the rust of missing two games, they may get a few chances to create turnovers.

8. The Miami Dolphins have done a lot right on offense this year with Tagovailoa starting. Running the ball is not one of those things, as they rank in the bottom-eight in every significant rushing category. The Dolphins rank third to last in rush yards, eighth to last in rush yards per attempt, and fifth to last in rush attempts. On the other side, Pittsburgh’s defense is better at defending the run than the pass by quite a bit. A one-dimensional offense is arguably an easy one to stop, and the Steelers cannot allow Miami to get their run game going. The Steelers will have their hands full with defending receivers Tyreek Hill and Jaylen Waddle, and it’s important that they are able to scheme their defense to defend the pass without jeopardizing easier running lanes for Miami.

3.5. Another week, another statistic to show how bad the Steelers offense is. This time, it’s all-around. The Steelers rank in the bottom part of the league in nearly every major offensive category. They are fourth-to-last in total yards per game, third-to-last in points per game, fifth-to-last in rush yards per game, and eighth-to-last in pass yards per game. However, one statistic that they rank dead last in by a significant margin is average YAC (yards after catch) per completion with 3.5. For a Matt Canada offense that thrives off short passes, this is far from ideal, and is something the team needs to turn around.