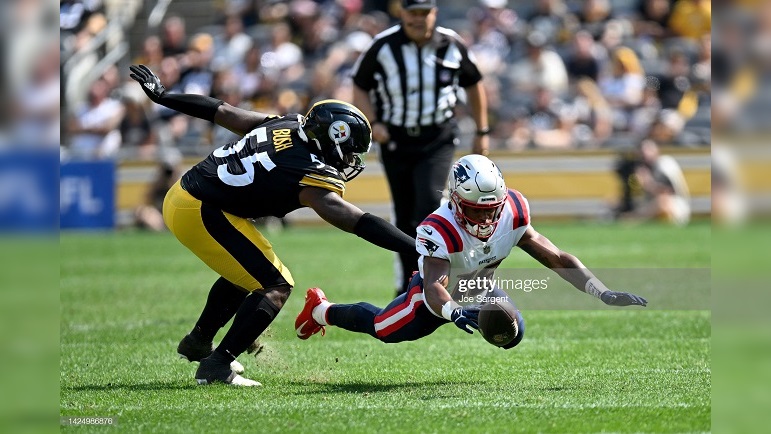 LB Devin Bush has faced much scrutiny over the last few seasons after failing to live up to the top ten selection that the Pittsburgh Steelers invested into him back in the 2019 NFL Draft, trading up from 20th overall to 10th overall to select the Michigan linebacker. After having a promising rookie season, Bush’s career got sidetracked with a torn ACL in 2020, causing him to miss the rest of the season. His return to the field in 2021 wasn’t what Steelers fans were hoping for as he looked lost on the field, lacking the situational awareness, aggressiveness, and consistency you’d hope for in a starting off-ball LB.

However, Bush has seen his performance improve this season while in the split with LB Robert Spillane beside Myles Jack. Last week against Tampa Bay, Bush had his best performance of the season and arguably his best performance prior to the ACL injury nearly two years ago. Bush looked fast, aggressive, and made several plays including the key pass deflection on WR Chris Godwin on a two-point attempt that helped Pittsburgh secure the 20-18 upset against Tom Brady and the Bucs.

Sitting at 2-4 with 11 games left in the season, some key decisions are coming up regarding Bush and plenty of other players regarding their future in Pittsburgh. The Steelers declined Bush’s fifth-year option, making him a free agent at the conclusion of the 2022 season. Thus, he will have the opportunity to test the open market and see what other teams may be willing to pay him, or possibly return to Pittsburgh should the team extend him an offer.

Dave Bryan and Alex Kozora recently discussed the possibility of Bush returning to Pittsburgh in 2023, and the two mentioned Terrell Edmunds’s contract as a plausible scenario which would prompt the Steelers to bring back their former first-round pick.

Edmunds also had his fifth-year option declined prior to the start of the 2021 season and became a UFA this spring. He sat out on the open market for months, leaving a gaping hole at safety for Pittsburgh. Ultimately, Edmunds re-signed with the Steelers six days before the 2022 NFL Draft, agreeing to a one-year pact worth $2.5 million. According to OverTheCap, Edmunds has a base salary of $2.385 million in 2022 with a prorated bonus of $152,500 and a cap number of $1,187,500.

Assuming the one-year contract for Terrell Edmunds is indeed a straight $2.5M deal, and not a one-year, 4-Year Player Qualifying Contract totaling $2.385M, the Steelers used just $1.605M in cap space to re-sign him after top 51 roster displacement. #Steelers #NFL

Edmunds may not be a high-end starting option at safety, but that contract is a steal for a player as reliable as Edmunds has been for Pittsburgh the last five seasons. While Bush has underwhelmed thus far in his NFL career, getting him on a one-year pact like what Edmunds got this spring wouldn’t be the worst option for a team that could fill a hole on the roster with a serviceable starter prior to the 2023 NFL Draft where they could add another off-ball LB to compete with Bush, but wouldn’t feel pressured into taking one early.

Currently, Bush is expected to hit the open market with the likes of Deion Jones, Lavonte David, Roquan Smith, Tremaine Edmunds, Denzel Perryman, Leighton Vander Esch, and Rashaan Evans also scheduled to become free agents at ILB. Much like how Edmunds hit the open market with plenty of other more attractive options at safety available last season, Bush may be looking at a long wait to find a team willing to pay for his services given the other names that could be available.

As much as I would like to see Pittsburgh go after Edmunds’ ‘little’ brother who is a physical specimen or a field general like Roquan Smith who is one of the best players at the position, there is a chance these top options get re-signed or franchised by their respective teams. Should they hit the open market, Pittsburgh would have to be motivated to pay top dollar for their services, something that they haven’t done historically in free agency.

While this trend could certainly change with new management in the front office, Pittsburgh will have to decide how they wish to allocate their cap dollars to free agents in-house as well as in the open market. Should they focus on other positions in free agency, it’s entirely plausible that they could extend a one-year contract offer to Devin Bush to be that stopgap at ILB much like Edmunds was last offseason until they feel like they have a better option. Bush would have to agree to such a deal to see him return to Pittsburgh but given the upcoming FA class and the bad tape he has out there, we could see him be put in a similar situation that Edmunds was last offseason and agree to a similar deal.