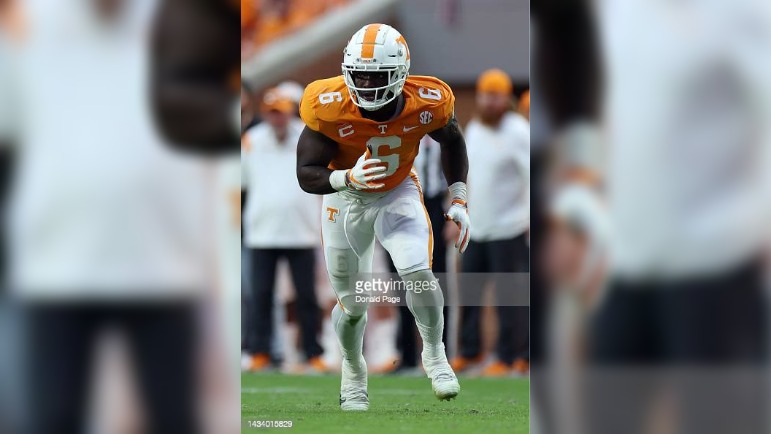 The Ohio State Buckeyes went into a hostile environment and came out the victors Sunday afternoon, defeating Penn State 44-31. The defense came up big for the Buckeyes, but the offense capitalized on the turnovers given to them. OT #77 Paris Johnson Jr. represented himself well both in pass protection as well as in the running game for Ohio State, keeping the pocket clean while also generating a strong push upfront to help the Buckeyes rush for nearly 100 yards on the ground. Standing 6’6, 310lb and having positional versatility, Johnson is solidifying his status as a likely Day One prospect as possibly a franchise blindside protector at the next level with another standout performance.

The Wolverines took care of business Saturday night in the Big House against the in-state foe Michigan State, beating the Spartans 29-7. Michigan dominated the LOS thanks to the efforts of the offensive line, especially C #55 Olusegun Oluwatimi. Oluwatimi transferred from Virginia this spring and started 35 games at the pivot position before arriving in Ann Arbor. On Saturday night, he did a great job of creating wide running lanes for RB Blake Corum to gash the defense as well as opportunities for QB J.J. McCarthy to escape the pocket as a runner. Oluwatimi also did a great job keeping McCarthy clean in pass protection and is shaping up to be on to the top center prospects in this draft class.

SMU beat Tulsa 45-34 in a shootout Saturday afternoon and WR #11 Rashee Rice continued to pad the stat sheet on a prolific 2022 season. The 6’2, 203lb senior caught nine passes for 180yards and two TDs with a long of 75 yards on the game. Rice has thrived in the Mustangs’ pass happy attack, getting past the defense down the field and showing off his run-after-catch ability once he has the ball in his hands. Rice currently has 62 receptions for 982 yards and six TDs on the season, having a spectacular performance after two quiet games in a row for a yardage standpoint. Rice figures to be a Day Three target that could play himself into Day Two with a strong finish to the year.

The Volunteers dismantled the Kentucky Wildcats in Knoxville Saturday night, winning in convincing fashion 44-6. The Vols are riding hot on a 8-0 start thanks to the play of QB Hendon Hooker and the emergence of WR Jalin Hyatt. However, the defense kept Kentucky out of this game thanks to the efforts of EDGE #6 Byron Young. The 6’3, 245lb senior has legit twitch and burst off the line paired with impressive effort in pursuit of the football both as a pass rusher and run defender.

Young finished the game with four tackles and 1.5 sacks, consistently putting pressure on Will Levis in the pocket who threw three INTs. Young’s name isn’t mentioned with the other top pass rushers in this draft class, but he has been a big reason for Tennessee’s success on defense this season and should be a good option to target in the middle rounds of the 2023 NFL Draft for a team needing a pass rusher.

Byron Young gets upfield in a hurry with two explosive steps, and stays relentless to sack Will Levis. pic.twitter.com/8149i5WNdF

The Oregon Ducks have rebounded since their Week 1 embarrassing loss at the Hands of the Georgia Bulldogs, picking up another convincing win this weekend against Cal 42-24. Oregon’s success this season can be credited to QB #10 Bo Nix. The former Auburn Tiger left the team as a cast off, having not capitalized on the hype that came with him starting as a true freshman. However, he has since made himself one of the best QBs in college football this season, completing 27-of-35 pass attempts for 412 yards (77.1%) and three TDs to two INTs while also running the ball 12 times for 59 yards and another three TDs.

Nix has become a dark horse Heisman candidate in recent weeks, throwing for 2,221 yards and 20 TDs to five INTs on the year with a completion percentage of 72.3%. He also has run for 441 yards and 11 TDs on the ground, being that dual-threat NFL teams are looking for at the position. He may not play himself into first round consideration, but Nix has drastically helped his draft stock and could be a target for a team with an older QB as a potential apprentice to groom or a quality backup option to another young QB with a similar play style to start his NFL career.

Three years ago in his college football debut, Bo Nix and Auburn took down Justin Herbert and Oregon in a thriller.