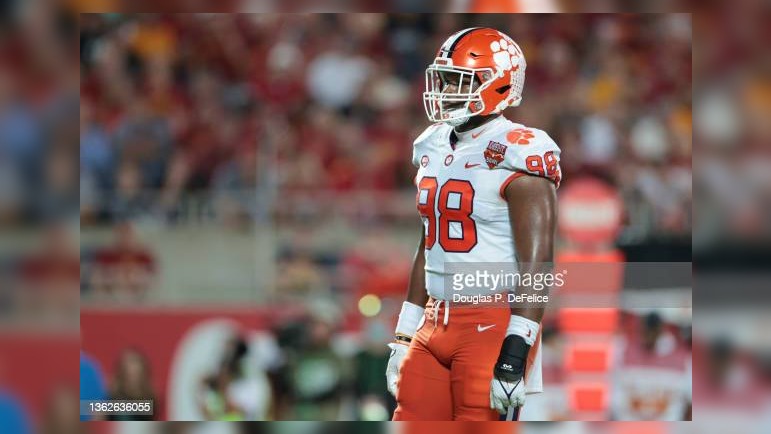 The Volunteers shocked the college football world Saturday afternoon, knocking off the Crimson Tide who were previously winners of 15-straight games over Tennessee on a walk-off field goal 52-49. QB Hendon Hooker looked like a Heisman candidate with another stellar performance and WR Jalin Hyatt posted the best receiving game in Tennessee history, but RT #58 Darnell Wright stood out as well for impressive performance against a talented Bama defensive front. The 6’6, 335lb senior helped the Volunteers control the LOS to the tune of 182 rushing yards and protected Hooker in the passing game, allowing him to throw for 385 yards and five scores. Wright particularly looked impressive against All-American EDGE Will Anderson Jr., keeping him quiet for most of the game.

Wright may not be garnering the same attention as some of the other top tackles in this draft class, but he has now strung together several stellar games in a row against some of the best EDGE prospects in college football. Wright and the offensive line are a big reason for this team’s success this season, and Wright is firmly entrenching himself as one of the better OT prospects in this draft class and may garner Round 1 consideration when it’s all said and done.

The Fighting Illini may have beaten the Golden Gophers Saturday afternoon by a score of 26-14. But C #60 John Michael Schmitz continued to make his case as the best center prospect in this draft class. The 6’4, 320lb senior was a road grader upfront from Minnesota, consistently sealing off his man to create running lanes for RB Mohamed Ibrahim to dominate on the ground, picking up 127 yards on only 15 carries (8.5 YPC).

JMS showed stellar anchor in pass protection as well as the physicality to plant his opposition on their backside with a couple pancake blocks. Built in a similar mold to Chiefs C Creed Humphrey, JMS is as steady as they come at the pivot position and looks to be a long-time starter at center in the league.

The best center in CFB is doing what he does 😤

John Michael Schmitz Jr seals the DL and then gets a piece of the LB to clear a lane for Ibrahim pic.twitter.com/CiqmI234mf

The Clemson Tigers went into Tallahassee and held off the Seminoles from getting the upset Saturday, winning 34-28. The Tiger defense has several studs that will be playing on Sundays, but none were quite as impactful as EDGE #98 Myles Murphy. Murphy racked up six total stops (five solo), 3.5 TFLs, two sacks, and a forced fumble on the day, showcasing his prowess as an NFL-caliber edger rusher. The 6’5, 275lb junior has the size, length, and athleticism to be a nightmare off the edge for opposing offensive tackles. His arm length and bend around the edge makes it extremely difficult for blockers to keep him from getting the corner, possessing the traits and room for growth that will likely make him a top ten selection this spring.

Myles Murphy with a strip sack for the #Tigers! Good get-off. Attacks the outside shoulder and uses active hands and his explosiveness to get around the edge.

One of the best defensive prospects for the 2023 #NFLDraft. pic.twitter.com/xaWoukquOh

The Utah Utes knocked off the USC Trojans Saturday night in a thriller in Salt Lake City, winning a nail biter 43-42. QB Cameron Rising totaled five TDs on the day, but his lead target TE #86 Dalton Kincaid had himself a day as well, padding the stats with 16 receptions for 234 yards (14.6 YPR) and a TD. Kincaid couldn’t be stopped by the Trojan defense as he regularly got separation against linebackers in coverage and used his 6’4, 240lb frame to win contested catches against USC’s smaller defensive backs.

It was Kincaid’s best performance of his college career as the senior is coming off a productive 2021 campaign but has now surpassed last year’s totals halfway through 2022. As one of the top TE prospects in this draft class, Kincaid made himself some money Saturday night.

The Oklahoma Sooners rebounded from a shellacking at the hands of the longhorns last weekend by winning a Big 12 shootout with #19 Kansas 52-42. RB #0 Eric Gray looked like the dominant tailback he was expected to be when he transferred from Tennessee to Norman over a year ago, toting the rock 20 times for 176 yards (8.8 YPC) and two TDs while chipping in two receptions for 13 yards.

Gray looked quick and explosive on the ground, making multiple defenders miss in space whilst also running through wimpy tackle attempts to earn pay dirt. A slashing style runner with pass catching chops, Gray has the skill set to be a viable NFL back to either compliment a bruiser in-between the tackles at the next level or become the lead back for a team looking to add some juice on the ground.

Eric Gray comes away with the player of the game as voted by you!