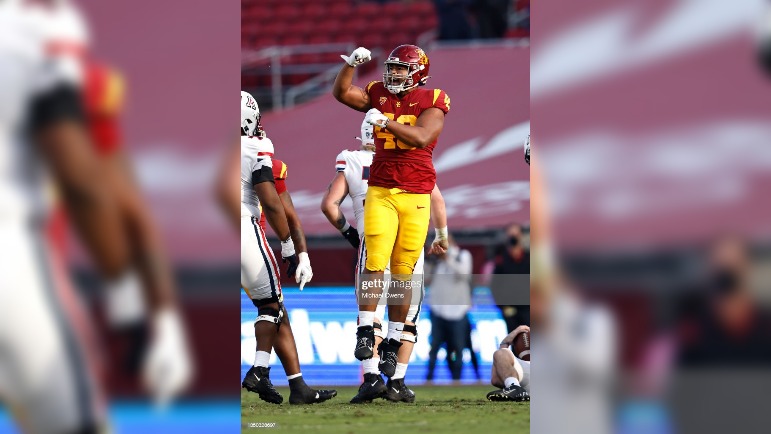 The Ole Miss Rebels took Vanderbilt to the woodshed Saturday on the road, winning by a final score of 52-28. QB Jaxson Dart went for nearly 450 passing yards in the game and the main target for him in the contest was senior WR Jonathan Mingo. The 6’2, 225lb WR had a career day, catching nine passes for 247 yards (27.4 YPR) and two TDs with a long of 72 yards. Mingo had never topped 400 receiving yards prior to this season but managed to break the single game receiving yardage mark in program history on Saturday as he well-utilized all over the field as a route runner and showed off his ability to generate YAC.

The most receiving yards in a game in Ole Miss history ❗️ pic.twitter.com/zqL8nPmf80

Viewed as a late Day Three or possible UDFA prior to this season, Mingo has the measurables along with tape to support a bump in draft stock for a team looking for a big-bodied receiver that can create after the catch.

Tuipulotu has been in the running to make this list in previous weeks, but his performance against Washington State Saturday night deserves recognition. The 6’4, 290lb junior is near the top of college football in the sack department after posting a three-sack performance against the Cougars to go along with four TFLs and five total stops.

Tuipulotu now has seven sacks on the season, an impressive feat for the underclassman interior defensive lineman. He has the size to clog up the middle, but also the athleticism to up and down the LOS and rush off the edge like he did on his final sack of the game. While only a junior, Tuipulotu has the athletic talent and production to warrant early round draft capital and it may be difficult to see him not declare early if he keeps up this pace with six games left on the schedule.

The Boilermakers came out of Maryland with a win Saturday afternoon, winning a close one 31-29. While WR Charlie Jones has been taking the headlines for his breakout season, it was TE Payne Durham that stole the show for the Purdue passing game in this one. The 6’5, 255lb senior posted seven receptions for 109 yards and a TD in the contest, catching a pass over the middle and proceeded to rumble for 56 yards, carrying multiple defenders with him to the goal line where he was brought down just shy of scoring.

Durham may not be as big of a name as Notre Dame’s Michael Mayer, but he has proven to be a quality pass catcher along with having the size and frame to become an adequate blocker. He will likely be a mid-round draft target this spring for a team looking for a skilled TE2 that is a good pass catcher that could potentially develop into a starting-caliber player.

The Volunteers rolled the LSU Tigers in Death Valley Saturday, 40-13. QB Hendon Hooker looked like he was in full control of the offense and the Volunteers racked up 263 rushing yards on the ground thanks in-part to the play of RT #58 Darnell Wright. The 6’6, 335lb senior paved the way upfront, using his strength and body control to create seals in the run game for backs to run right off his backside untouched into the second and third levels of the defense. He also represented himself well in pass protection, shutting out EDGE BJ Ojulari who didn’t record a sack or TFL on the day.

Wright may not be garnering the same attention as some of the other top tackles in this draft class, Wright and the offensive line is a big reason for this team’s success this season, looking to be an NFL-caliber player as Tennessee gets hot down the stretch.

In a battle for the state of Michigan between conference rivals, the Eastern Michigan Eagles beat the Western Michigan 45-23 on Saturday. The Eagles went over 400 yards of total offense but put constant pressure on WMU’s QB throughout the contest, racking up seven sacks and eight TFLs. EDGE Jose Ramirez led the way as he had four sacks and four TFLs himself, living in the opponent’s backfield. The 6’2, 252lb senior had 6.5 sacks and three forced fumbles last season, showcasing pass rush upside as a late round or potential UDFA prospect. After a breakout performance against Western Michigan Ramirez is making scouts take notice in a player that could rise up draft boards this spring as a sleeper that wreaks havoc on the edge.

Ramirez having A DAY for the Eagles. #CFB https://t.co/MGLJYhT7Wp