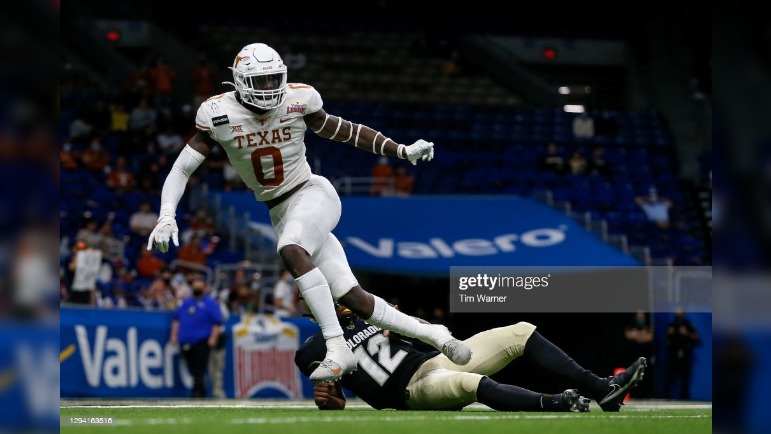 The Bearcats travel to Dallas to take on the SMU Mustangs in an AAC Conference clash. The Bearcats will be headlined on defense by LB #0 Ivan Pace Jr. who has enjoyed a stellar first season with the team since transferring from Miami of Ohio. Pace has been a game wrecker for Cincinnati, ranking near the top of the list in college football in terms of pressures and pass rush grade. Pace currently sits at 62 total stops (30 solo), 12.5 TFLs, five sacks, a PBU, and a forced fumble at the halfway mark. PFF’s top-ranked college defender at the halfway mark will look to keep the hot streak going against an explosive SMU offense on the road.

The Mustangs will rely on WR #11 Rashee Rice to pull off the upset against the ranked Bearcats squad. Rice ranks near the top of college football in receiving yards with a whopping 761 yards on 49 catches in just six games played. The 6’1, 189lb senior excels in the SMU pistol offense, catching the ball in space with room to run and pick up big chucks of YAC. The Bearcats defense will be the toughest he has faced yet and with Rice dealing with a toe injury, his status for this game isn’t certain. Still, Rice is an intriguing Group of Five prospect that will have a chance to show scouts he can produce against better competition this Saturday.

The Orange will go into Death Valley Saturday to try and unseat the fifth-ranked Clemson Tigers who currently sit atop the ACC Conference.

To defend QB D.J. Uiagalelei and the Tigers passing attack, Syracuse will be relying heavily on DB #8 Garrett Williams in the secondary. The 6’0, 189lb junior was widely touted as one of the top cover men in this draft class prior to the 2022 season and Williams has lived up to the hype so far, posting 30 total stops, a sack, three PBUs, two INTs, a forced fumble, and two fumble recoveries. Williams has a nose for the football, whether it be in coverage or as a downhill defender against the run. He has great athleticism paired with the ball skills to become an NFL-caliber outside CB or potentially use his range as a centerfield safety should teams prefer him there in their scheme.

For the Tigers, DL #11 Bryan Bresee is a name to hold underneath the microscope, the 6’5, 300lb defender is a physical specimen on the defensive line, having impressive burst, strength, and power to rag doll blockers and get after the passer. Still, while Bresee has the pedigree and is physically gifted, he has struggled to turn those gifts into production, having only eight total tackles, two TFLs, and 0.5 sacks in four games played. Part of this lack of production goes back to missing two games for a non-football medical issue that required him to be briefly hospitalized and missed the Louisiana Tech game after losing his sister to brain cancer.

For a player that has been touted as a top ten pick, Bresee has every excuse to not be playing at a high level, but should he return to form down the stretch, we could see him vault his draft stock back into the top half of the first round starting with a good performance against Syracuse.

The Bruins look to do battle with the Ducks in Eugene for a top ten clash between Pac 12 Conference rivals.

The Bruins are off to a hot start, sitting perfect at 6-0 thanks to the emergence of WR #9 Jake Bobo. Bobo transferred from Duke this spring and is enjoying his best collegiate season as a redshirt senior, posting 24 receptions for 385 yards and five TDs. The 6’5, 215lb receiver is a mismatch for most defensive backs in the secondary, having the height and leaping ability to routinely win the jump ball in the red zone. He also has shown some run-after-the-catch ability, having some wiggle to get in space to pick up YAC. He will face a talented Oregon secondary this Saturday, but Bobo can show scouts his production thus far hasn’t been a fluke.

Jake Bobo is having a NIGHT!

The defender that will most likely draw Bobo in coverage is CB #0 Christian Gonzalez for the Ducks. Gonzalez came over from Colorado this season and has made himself a sought-after cover man in the 2023 draft class. He has the height and length you look for in an outside CB (6’2, 200lb) with the fluidity and hips to match. He is comfortable in press coverage situations and can turn and run with the best of them on the outside. He is heady and uses his hands well in pass coverage and could be one of the top CBs off the board this spring when it’s all said and done.

Oregon’s Christian Gonzalez with a huge PBU on third down. Patient feet in press, gets his head around to locate football, and makes a play. One of the best CBs in the 2023 NFL Draft class. pic.twitter.com/swYpwCJVa3

The Longhorns and the Cowboys square off in Stillwater in a Big XII showdown Saturday afternoon.

The Longhorns are led by RB Bijan Robison and Quinn Ewers on offense, but LB #0 DeMarvion Overshown is the name to watch on the defensive side of the ball. Overshown is a long, lengthy linebacker, standing 6’4, 224lb that looks more like a pumped-u safety than a traditional downhill thumper. The redshirt senior could have declared last year but was rough around the edges in terms of coverage and tackling, thus made the right decision to come back for another season. The decision proved to be a fruitful one as Overshown has looked like a more consistent prospect, having speed as a sideline-to-sideline defender as well as playing with better instincts. Stopping the OSU offense will be a challenge that Overshown looks to accomplish Saturday.

For the Pokes, their dynamic offense looks to keep things rolling against the Longhorn defense with OT #76 Caleb Etienne leading the way on the offensive line. Etienne is listed at 6’7, 325lb, but has lost nearly 30lb since coming to Oklahoma State, tipping the scales at over 350lb at one point in time. He is a large human being capable of displacing defenders in the run game and has the tools you look for in an NFL pass protector. Still only a junior, Etienne could consider declaring early should Oklahoma State continue their success and his play continue to garner the interest of scouts.

The Bulldogs of Mississippi State travel to Tuscaloosa to take on the Crimson Tide who are looking to take out last week’s heartbreaking loss to Tennessee on their SEC Conference foe.

The Bulldogs will be relying heavily on their defense to slow down the Alabama offense, particularly CB #13 Emmanuel Forbes against QB Bryce Young. Forbes has been named a midseason All-American by The Athletic, Associated Press, and CBS thanks to his stellar play thus far in 2022 as he has picked off five passes and returned two for TDs at the season’s halfway mark. Forbes has been a ballhawk since he stepped foot on campus as a true freshman, having 13 INTs to his name in that timeframe with five taken back for house calls. If the Bulldogs want to pull off the upset, Forbes may need to run another one back on the reigning Heisman Trophy Winner in this one.

Emmanuel Forbes has been named a midseason All-American by The Athletic, Associated Press, and CBS.

For Alabama, they will be relying on a defensive back of their own to make a notable impact in this game. That is exactly what S #9 Jordan Battle did last season against Mississippi State as he picked off two passes and returned one to the house. Battle is a 6’1, 206lb senior that has gotten better each season, being a great fit as a strong/box safety that can also play split zone on the backend. He is a big hitter but needs to be more consistent with his tackling to avoid missed attempts. A likely Day Two pick right now, Battle could stand to finish the season strong with a big performance against the team he haunted last season to boost his draft stock.