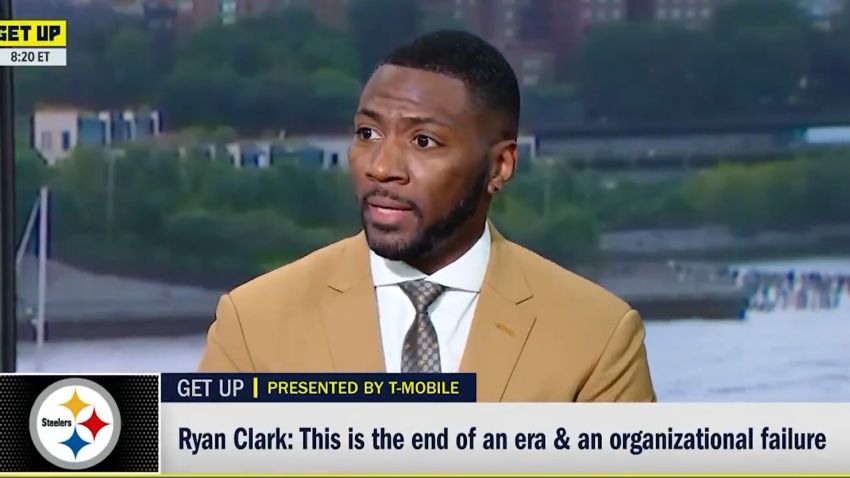 When asked about former Steelers S and current analyst Ryan Clark’s comments from yesterday when he appeared on ESPN’s Get Up! and accused the Steelers of giving up in a humiliating loss to the Bills in Buffalo, Tomlin shrugged off his former player’s comments understanding what his role is now in the national media.

“Ryan is paid for commentary,” Tomlin said to the media Tuesday which aired live from the team’s YouTube channel. “And so, I understand that, and I think our guys understand that. I mean, he’s on ESPN every single day, and so it’s his job to talk about what transpired and we realize how poorly we played on Sunday, and so we don’t dispute anything that somebody says from a commentary perspective or dig too much into it and things of that nature. Man, we got so much to work on in terms of what’s going on in here and in preparation for our next opportunity. That’s irrelevant.”

Clark mentioned Monday when on the air that this whole problem that is the 2022 Pittsburgh Steelers starts with coach Tomlin as the man that must have his team ready to play. Clark understands this, having played under Tomlin for seven seasons in Pittsburgh when Tomlin arrived with the team back in 2007, being a member of Pittsburgh’s vaunted defenses of the 2000s that helped the Steelers reach the Super Bowl twice during their time together, winning one in Super Bowl XLII.

Tomlin has referred to Clark like a son and how it was his job to safeguard him back when he held Ryan Clark out of the Denver game due to his sickle cell trait despite him being medically cleared. Clark mentioned multiple times on The Pivot, which Tomlin appeared on this summer as a guest, that his respects the world out of his former coach, meaning that his words were never meant to come off as attacking the man’s character, but rather hold his former coach accountable for “the standard” he held Clark to back in his playing days.

Thinking about how the Dolphins handled Tua over the past week. Compare that to Mike Tomlin, who held Ryan Clark out of the Denver game due to his sickle cell – despite him being medically cleared – in case something happened.

"I got an obligation to safeguard him." pic.twitter.com/grU7sdrpMj

Shortly after the press conference, Ryan Clark took to Twitter to give his thoughts about the silliness about asking an NFL head coach about what a media analyst said about him, albeit being a former player.

I think it’s stupid that players and coaches have to answer questions about what an analyst says on TV!

The NFL is a results-driven business, and when you aren’t getting results, people are going to talk about it. That is what Ryan Clark is paid to do as a member of the national media that has so often supported Tomlin and the Steelers in the past when others didn’t. Tomlin understands this and holds no grudges against his former player and current friend, knowing the results his team have had in recent weeks don’t represent what Pittsburgh Steelers football is supposed to be. Tomlin doesn’t dispute Clark’s comments; his team got smashed last week in his own words. Now, it’s up to Tomlin and the rest of the team to try and get this ship turned around and salvage the season starting with the Tom Brady-led Tampa Bay Buccaneers coming to town this coming Sunday.

I was speaking with the intent of doing my job. It’s not my job to speak to Mike T, but now I will text and apologize that he had to answer questions about my analysis. https://t.co/eM3HKUnJX4