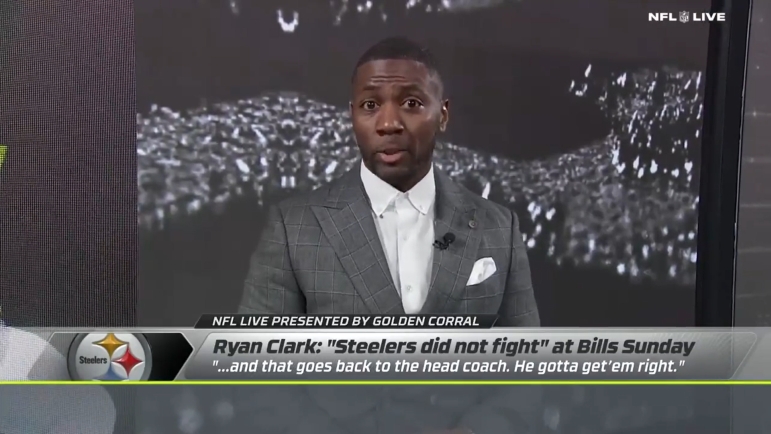 Sometimes you get exactly what it says on the tin. This story is one of those times. Former Pittsburgh Steelers safety Ryan Clark inserted himself into the organization’s narrative this week by asserting certain intangible things about the current roster, knowing full well what the implications would be, and then reacted negatively when the inevitable ensued. And then he got his response wrong.

Let’s start with Sunday afternoon. The Steelers got [choose your own verb] on the field against the Buffalo Bills, dropping the game 38-3. Flash forward to Clark’s commentary, now on ESPN, during which he says the following (see below for an embed):

This team gave up. This team wasn’t playing anymore. It wasn’t important enough for them to go out and have pride in the way they approach the game. And that’s a problem.

So let’s understand here. That’s the starting point. That’s what Ryan Clark put out there at the end of his rant. And that’s what got people talking about it. Making that intangible assertion is what made him the story, and why head coach Mike Tomlin and wide receiver Diontae Johnson were asked about it.

And Ryan Clark is a member of the media. As a player, he was one of the go-to interviews in the locker room. He understands how this thing works. There’s no way that he said what he said without the understanding that it had the potential to generate the impetus for reporters to pose legitimate questions to the current team about what the former player said about them.

That’s the life cycle of this industry. People make news, or make news of themselves, and then those involved are asked questions about that news. It’s actually pretty audacious of Clark to go after Brooke Pryor, who asked the question to Johnson, but he made it far worse when he falsely accused her of misrepresenting what he said.

Because she didn’t. She just used synonyms for the words that he used, but what she asked was entirely in keeping with and reflective of what Clark said. And then he continued to insert himself into the story by responding, not just to Pryor, but to Johnson. Let’s start with the question Johnson was asked.

The only issue is that she said that a former Steeler “tweeted” that he “felt like this team kind of quit”. No, Clark didn’t tweet that, as he pointed out on ESPN in his follow-up segment. He just said that they have to “dang fight”.

Mike Tomlin is my favorite football coach. With that be said no matter what the roster looks like your team has to be prepared, be in proper positions to succeed, and dang fight! The Steelers did not fight today, and that goes back to the head coach. He gotta get’em right.

But he said on ESPN in an earlier segment that they “gave up”, that they weren’t “playing anymore”, that it “wasn’t important” for them to “have pride” in their game, and that they “didn’t fight”. He also said that the only player on the entire roster that he would take down an alley in 2008—which we can probably assume means he would have on his team then—was Kenny Pickett. Not Cameron Heyward or Minkah Fitzpatrick or anybody else. Just Kenny Pickett. Everyone else isn’t good enough in these intangible, undefinable qualities.

That’s a lot of things to pretend that you didn’t say, Ryan. And it’s not a problem, necessarily, that you said them. It’s a problem that you either are pretending that you didn’t, or that you’ve forgotten that you did (even though he’s plenty capable of pulling receipts). Pryor’s question was legitimate and fairly represented what you said about the team. So either own up to what you said and stop complaining about it, or acknowledge that you forgot what you said—or that you were speaking out of emotion. Don’t play the victim here.

Before I wrap it up, I just have to point out again just how disingenuous Clark’s follow-up ESPN segment was. Presumably hiding behind the wording of Pryor’s question, the program was able to conveniently leave out the fact that he basically said what Pryor said he said, only he said it ON ESPN rather than in a tweet.

“I will say you did not say that”, the co-host says. “We did show the tweet”. Clark even shared that segment on Twitter and said that he “didn’t tweet that the Steelers quit as [Pryor] asserted”.

I didn’t tweet that the Steelers quit as @bepryor asserted & I understand Diontae Johnson’s annoyance.

I don’t mind his remarks, & respect his thoughts, but I have a response.

I haven’t missed football 1 second since I retired. Hopefully he gives enough to feel that way too! pic.twitter.com/WObJror9W5

But you didn’t show the program on your own network in which he did say it. What are you doing? You promoted it. And it was on Twitter being promoted. The tweet is right here, look:

I could easily spin another 2000 words on this, but it’s pointless. The bottom line is this: either say what you mean and stand by it or correct the record. Don’t shoot the messenger or blame them for delivering the message.

You said the Steelers gave up.

You said the Steelers stopped playing.

You said the Steelers didn’t have pride in their game.

You said the Steelers didn’t fight.

You said these things. They are the equivalent of saying that they quit. Did you mean what you said or not? And if you did, can you show it? Because you claim to be speaking as a paid analyst, yet this isn’t analysis of the game. This is analysis of psyche and emotion. And you even said so yourself.

Clark tweeted out the segment himself in which he says the above, and accompanying that very tweet he wrote that you “can’t ever say players quit, because you can’t judge intent”.

They did not fight.. can’t ever say players quit, because you can’t judge intent.

They were not prepared to fight, didn’t execute, & didn’t strain. It’s unacceptable https://t.co/4J7GinqXgl