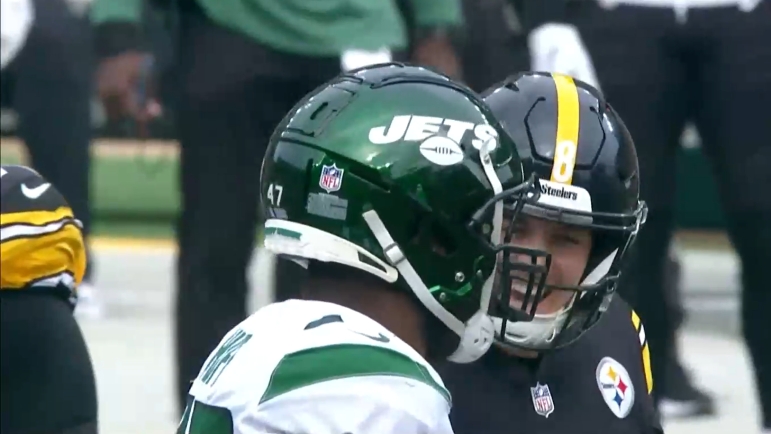 The era has begun. Kenny Pickett saw his first action as a pro and not one of his passes hit the ground. Albeit, three were to the other team of which two probably should have been caught by teammates. Overall, he looked good. For the most part he looked composed, ready and made good decisions.

After five straight runs he got to throw his first pass and gave his receiver a chance but the ball was batted and intercepted. First completion went to Zach Gentry. The same man who caught Ben Roethlisberger’s last completion. His ball placement overall was pretty good especially the back shoulder throws, something we did not see from Mitch Trubisky. The second interception went through the hands of Pat Freiermuth. Probably should have been caught but better yet, probably should have been thrown away. He had already retreated eight yards on the play and threw it off balance.

His showed his toughness and anticipation on the throw to Freiermuth to get in the red zone and got up smiling. He had a couple scrambles and looking at the game film they were the correct decision. No one was open on the plays. He showed he could fling it as well with the Hail Mary travelling about 64 yards in the air.

On a pitch to Jaylen Warren he did have a fumble also. He short armed it, not following through, leaving the ball low and behind the runner.

For the third time in four games Pickens played exactly 45 offensive snaps with the other game totaling 50 snaps. They finally decided to let him run a more diverse route tree and the results corresponded. He had double digit deep routes in the first three games but in this contest they were more evenly spread to all three levels. The result was a one hundred yard day.

On his first target it was a Post route across the field that with a little less hang time on the throw may have been a big play. His second target came on an intermediate level In breaking route making nice contested catch. His next reception was on a stop route that was tackled immediately. Catch number three came on a Dig route were he made a nice move to turn the safety to gain more space. This allowed him to gain about ten yards after the catch.

The next opportunity came on a Go route down the sideline where after the play he indicated the ball needs to be thrown higher. The next two thrown his way resulted in receptions. The first was a quick Out route with two yards after the catch. That was followed by the pretty back shoulder throw displaying his body control to twist outside and keep his feet in. After a ball thrown his way out of bounds he made another back shoulder catch on a slot fade while contested.

Here is the nice Dig route by Pickens from the slot. At the top the route he will drop his hips and hesitate for beat to get the safety to move to the outside before cutting inside.

He had a couple nice blocks including outside on run in the second quarter. On the late second quarter interception he showed good hustle coming from the other side of the field and about fifty yards down field to get a hit on the returner. He then unnecessarily stood over the player escaping a taunting penalty. All on the interception off of Freiermuth, he got a late push on the interceptor. He needs to watch that to not get any dumb penalties.

At the bottom of the screen, Pickens gets a nice block playing with balance, using his length and sustaining the block to the whistle.

Leal had as many tackles in this game as he did in his first three. He is proving quite valuable to the team with his versatility. He is seeing a lot of time on his feet as an outside linebacker. On his first play, he made himself known setting the edge and getting off the block to get in on the tackle. The second tackle was a similar play where he shed the block and contributed to make a stop for no gain. His final two tackles both came from the backside. The latter was aided by Larry Ogunjobi getting big penetration to disrupt the play resulting in the tackle for a loss.

As a pass rusher, he displayed his motor on every snap and showed a couple nice rushes. On a T-E stunt he used quickness to get inside to help chase the quarterback out of the pocket. He showed off a nice club/swim to the inside of the tackle and had a good bull rush versus two tight ends that were blocking him.

On special teams he got called for using leverage to attempt to block a kick costing the team 15 yards on the kickoff resulting in a pooch kick that was returned by Benny Snell.

Be sure to check out Jonathan Heitritters’s Film Room on the play of Leal.

It was another quiet game for the younger Heyward brother. His lone offensive snap came on the second play of the game. From a tight end bunch in 13 personnel he ran a Corner route on the pass play.

On special teams he handled his blocking duties well on punt cover. On kick off and kick return he was not involved in any plays that stood out. He did get a push on the kicker on the Snell return though.

Warren continues to contribute notable plays on the offensive side of the ball. The first carry was not blocked particularly well. He displayed vision and bounce to find the small gap to gain three yards. Next on a sweep to the right he showed patience to set up his blocks and used good acceleration leading to a 14 yard gain. He had a short gain on his third carry. There was to be a fourth carry, a toss to this right that was thrown low and behind him. He didn’t panic, picked up the ball and limited the loss on the play.

In the passing game, his lone catch came on a shallow cross. It was thrown slightly behind him limiting his chances after the catch. The rest of his routes were check releases from the backfield. In pass protection, he again made the correct reads. His first two included chips on the edge helping the tackles. First the right side then the left. He followed that with a booming chip to knock down the pass rusher. Later in the game he made a good read to get across the formation and pick up the free rusher. He has proved very valuable as a pass protector early in this season.

These Jaylen Warren chipping shots are showing up quite a bit on tape #Steelers #NFL pic.twitter.com/4XudfKGuv9