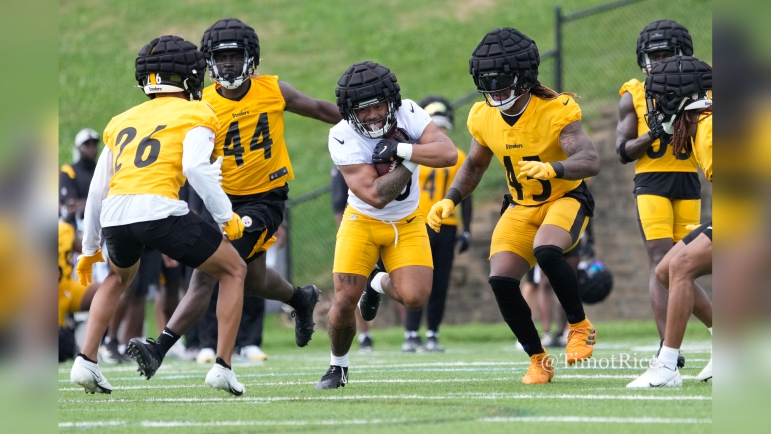 Undrafted rookie running back Jaylen Warren is slowly carving himself a niche with the 2022 Pittsburgh Steelers. Initially, Warren was seen as a special teams contributor, not likely to see much action behind workhorse Najee Harris. However, four weeks into the regular season, Warren is garnering attention from Bleacher Report. Alex Kay ranked him as the team’s hidden gem this season.

While no one is debating that Harris is the undisputed star of the Steelers’ backfield, Warren is doing the most with what he’s being given. Kay alludes to this by calling him “the most effective running back on the Steelers’ roster.” Harris has carried the ball a total of 40 times so far this season, recording 15 rushing attempts in each of the last two games alone. Meanwhile, Warren has carried the ball just 11 times. The difference isn’t as stark as you’d think, in terms of impact.

Harris is averaging under four yards (3.2) ahead of the team’s matchup with the New York Jets. By comparison, Warren’s same average is just shy of five yards (4.7) this season. Obviously, the differential in carries makes a difference, but it’s to Kay’s point with regard to doing more with less. In the team’s Week 3 loss to the Cleveland Browns, Warren recorded four carries but made the most of them, with an average of 7.50 by the game’s conclusion.

While last year’s numbers don’t have too much bearing on what’s happening right now, they’re worth noting. Regrettably, Harris’s current average of 3.2 yards per carry isn’t looking too good. By comparison, his 3.9 average for 2021 was impressive. Is it possible that the thread on those tires is showing wear already? We all know head coach Mike Tomlin uses his running backs until the wheels fall off. Warren slowly supplanting some of Harris’s touches wouldn’t be farfetched. Though Harris’s use in the passing game still gives him the upside.

Warren’s fumble during the Browns game likely affected his usage that game, but the numbers don’t lie. Harris is off to a rough start, which can be blamed on several factors that Steelers fans are all but too familiar with. Matt Canada’s playcalling, the offensive line woes, etc. The Steelers’ ground attack just hasn’t been the same. Harris’s status surely isn’t in trouble yet, but Warren getting more touches as the weeks go by shouldn’t surprise folks.