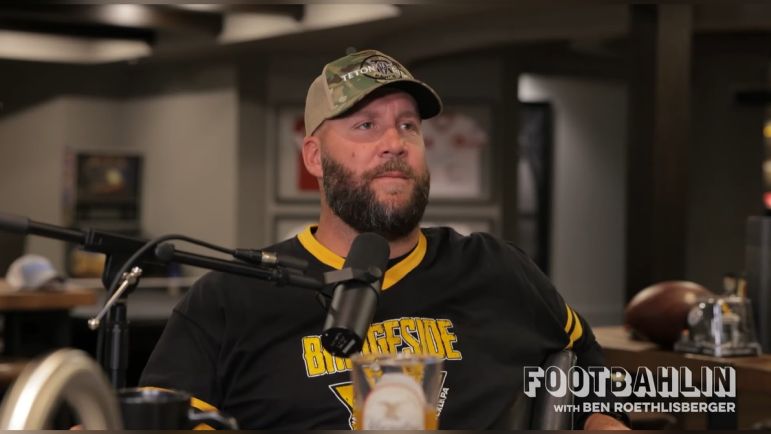 In the Pittsburgh Steelers first season without Ben Roethlisberger, the team has limped out to a 1-4 start. Roethlisberger wasn’t the same player he once was towards the end of his tenure with Pittsburgh, and on Episode 7 of his Footbahlin’ podcast, he said his decision to retire came down to him knowing the Steelers didn’t want him back, and he couldn’t see himself in any other uniform.

“I knew that the Steelers didn’t want me back after I had one more year, so I knew that was it. So I knew my time in Pittsburgh was up, it was just a matter of did I want to go play somewhere else, and I couldn’t see myself in any other jersey. So I kind of knew going into last year, and most people don’t know this, but knew that it was it, because, again, the Steelers weren’t going to have me back again. So I was preparing for it.”

He did add that he enjoyed making new friends with Diontae Johnson, Pat Freiermuth, and Dan Moore Jr. Obviously though, Roethlisberger didn’t see the locker room functioning the same way it did with guys like Pouncey and DeCastro, who were two of his better friends on the team.

It’s also interesting to hear that Roethlisberger believes the Steelers didn’t want him back. Given his diminished ability, that very well may be the case. While he was still clutch and managed to lead the Steelers to a playoff appearance, I’m not even sure how many teams around the league would’ve been interested in his services, which probably made his decision to retire even easier. I do think it’s telling that Ben knew ahead of the 2021 season that it would be his last season because the Steelers wouldn’t want him back another year.

It does make you wonder whether the Pittsburgh front office made it clear in their negotiations to restructure his 2021 contract that it would be the last year for Roethlisberger in Pittsburgh. That contract was made to void five days after the conclusion of the 2021 season, which also could’ve been a telltale to sign Roethlisberger that his time in Pittsburgh was up.

While Roethlisberger’s last season was certainly fun to watch him lead the Steelers to one more playoff appearance, I think it was pretty clear to everyone that it was best for both parties to move on. Roethlisberger just didn’t have the ability to lead a team anymore, and the Steelers needed to move on and get into a new era. As Roethlisberger said, a lot of his friends on the team were already moving into retiring, and the Steelers had to eventually move on for the good of the franchise. He did say that he doesn’t necessarily miss football, or more specifically getting hit, in his first year of retirement.