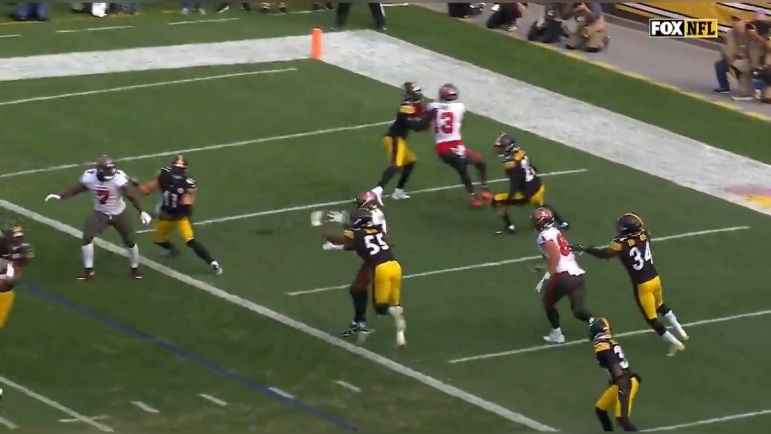 The Pittsburgh Steelers made a ton of plays to beat Tom Brady and the Tampa Bay Buccaneers Sunday. But none may have been bigger than Devin Bush, who swiped away a would-be tying two-point conversion late in the fourth quarter. A play that preserved Pittsburgh’s lead and contributed to a historical upset.

After the game, fellow LB Myles Jack praised Bush for stepping up in a major moment.

“Everybody made big plays,” Jack said via Steelers.com of the victory before being asked about Bush’s play. “That was huge. That’s my guy. That’s what he always does. So I’m rocking with 5-5.”

As they did much of the game, Pittsburgh dropped into a zone defense on the two-point play with the underneath crosser run by WR Chris Godwin being passed off from CB Arthur Maulet to Bush. Reading Brady’s eyes, Bush drove on the ball and swatted it away, keeping it a 20-18 game.

A great close and finish while playing clean, not drawing a flag in this ticky-tack football world. It was one of many key end zone stops on the day, holding the Bucs to just a 25% touchdown rate in the red zone.

Bush has been ripe for criticism, a former 10th overall pick the Steelers traded up to get and certainly someone who hasn’t met expectations. His career has been plagued by injuries and controversy over his social media actions, while some questioned his game-to-game effort. Two years removed from his 2020 ACL tear, Bush has made small strides, showing more physicality and better run defense. But his coverage always left plenty to be desired. Breaking up a ball in a big-time moment like that is, at the least, encouraging.

Talking to reporters himself after the game, Bush says he knew what the Bucs were going to run.

Winning this game was a total team effort with great plays at all three levels. The interior pressure of Cam Heyward and Larry Ogunjobi. The EDGE pressure of Alex Highsmith and Malik Reed deflecting a pass. Myles Jack’s leaping play to break up a would-be touchdown, Bush’s swat, and a secondary that held firm for 60 whole minutes. They’ll need more outings like that to officially climb their way back into the hunt.