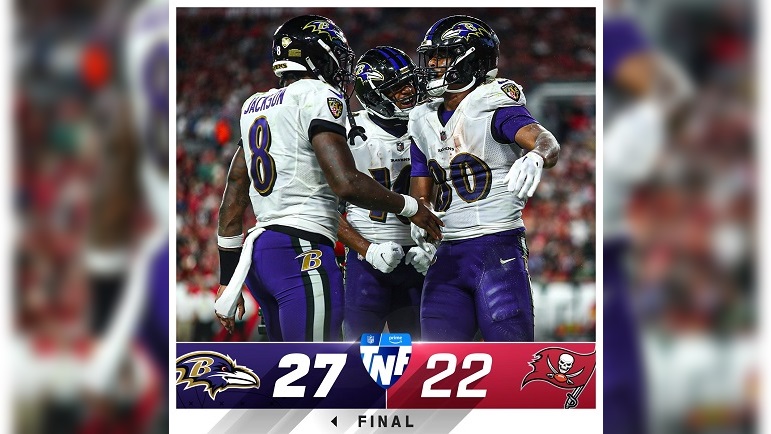 The Baltimore Ravens are now kings of the north, at least temporarily, after claiming a Thursday night victory last night over the Tampa Bay Buccaneers. While they handed quarterback Tom Brady just the second losing streak of three or more games in his career (he lost four in a row back in 2002), the Ravens also managed to stack back-to-back wins for the first time this season.

And at least until the Cincinnati Bengals play the Cleveland Browns on Monday night, they now have outright control of the division at 5-3. They have alternated wins and losses, beginning with a victory in the season opener, for the first six weeks, but now have ensured themselves a winning record at the (approximate) halfway point.

It actually didn’t look very promising halfway through the game. They trailed 10-3 at the break, the first time all season they were on the wrong side of the scoreboard at halftime, but they largely dominated the second half.

They ultimately claimed a 27-22 victory, although the Buccaneers added six points (with a failed two-point conversion attempt) on a touchdown pass with under a minute to play. The Ravens got things jumpstarted in the third quarter with two touchdown drives to open the second half, Lamar Jackson first finding Kenyan Drake and then rookie tight end Isaiah Likely for the score.

Although All-Pro tight end Mark Andrews did suit up for the game after not practicing all week with a lingering knee injury, and finished the game with three receptions on five targets for 33 yards, he did not actually finish the game. He exited with a shoulder injury, which head coach John Harbaugh said in his post-game press conference that it did not appear serious.

For some reason, the Ravens came out of the gate throwing, going into the half with 30 pass attempts, averaging 10 pass attempts per point scored. Jackson threw just eight passes in the second half, two of them touchdowns.

Their defense, meanwhile, did an excellent job of keeping Tampa Bay’s running game in check, limiting them to just 44 yards on 15 carries. Leonard Fournette totaled just 24 rushing yards on his nine attempts, leaving it all on Brady’s shoulders. Brady finished the game with 325 passing yards, going 26-for-44 passing with one touchdown pass and no interceptions.

As for the rest of the division, the Browns are reeling after losing four consecutive games since defeating the Steelers all the way back in week three. They lost to the Ravens on Sunday. The Bengals themselves became the first team in the division to win consecutive games earlier this week, sitting at 4-3 and hoping to keep pace with the Ravens with a win over Cleveland on Monday night.