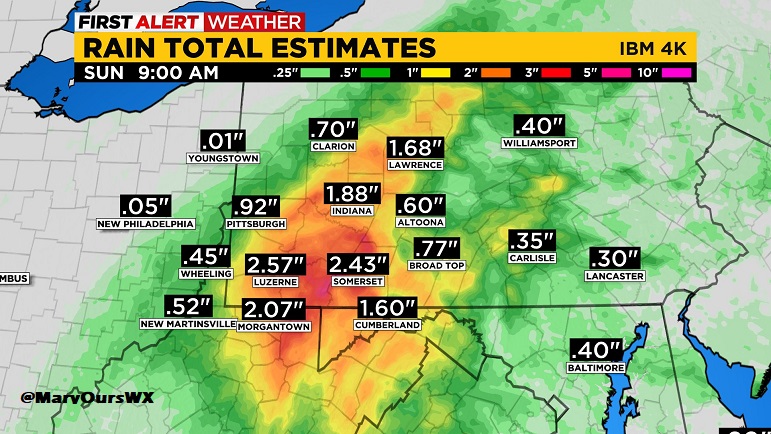 Will weather play a role in the Sunday game between the Pittsburgh Steelers and the New York Jets? While it’s hard to say for sure, it sure sounds like there is quite a bit of rain in store for Acrisure Stadium and starting Saturday night.

The latest Pittsburgh weather forecast for Saturday night calls for rain showers with a low around 52 and a north wind of 7 to 9 mph, with gusts as high as 23 mph. Chance of precipitation Saturday night is 80% and new precipitation amounts between a half and three quarters of an inch are possible. Obviously, a lot of this is rain is related to remnants of Hurricane Ian.

This rain forecasted for Saturday night is a big deal because Pitt is set to host Georgia Tech Saturday night at Acrisure Stadium with that game not even getting underway until 8:00 p.m. ET. That field might be a muddy mess just short of midnight.

It will be interesting to see how quickly the grounds crew at Acrisure Stadium can get that natural grass surface turned around and ready for the Sunday game between the Steelers and the Jets as the kickoff for that contest is at 1:00 p.m. ET. And especially if there is rain throughout the Saturday night college game and the hours that follow it.

In case you are curious, the Sunday weather forecast for Pittsburgh includes chance of showers, mainly before 10:00 a.m. ET. It’s expected to be cloudy with a high near 63 with a northeast wind 7 to 9 mph, with gusts as high as 22 mph. Chance of precipitation for Sunday is 30% with new precipitation amounts of less than a tenth of an inch possible.

For whatever it’s worth, the grass in the middle of the field at Acrisure Stadium was replaced this past week. Will the entire surface be replaced Saturday night and into Sunday morning? We’ll see.

Good Saturday morning! We have light rain showers right now but rain will pick up as remnants of Post-Tropical Ian move in. On and off heavy rain will leave most areas with 1-2" and some over 2" by tomorrow morning. I'm timing it out right now on @KDKA! pic.twitter.com/0ZD7wcX5zO