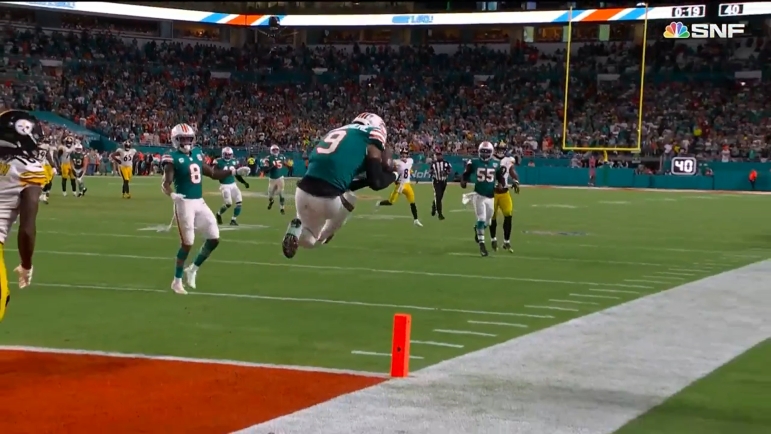 It all felt so promising late in the Sunday night game for the Pittsburgh Steelers against the Miami Dolphins at Hard Rock Stadium on Sunday Night Football.

Then — twice — it all came to a screeching halt.

Two poor interceptions from rookie quarterback Kenny Pickett did in the black and gold on national television in a 16-10 frustrating loss, dropping the Steelers to 2-5 on the season.

While Pickett threw three interceptions on the night, the Steelers defense dropped four picks — two of which led directly to field goals for the Dolphins — in an other strong showing, holding the Dolphins scoreless in the second half. In the end though, the offense couldn’t do enough, scoring just 10 points in another boring, bland performance.

Let’s get to some grades and move on to Philadelphia.

For the most part, Pickett played well — until he didn’t.

There were some misses early on in the game, including the two third down targets for Diontae Johnson in the first half, one on a deep shot and the other a sideline throw on third down. After that though, Pickett settled down and started to move the offense with the quick-strike passing game.

He was able to get into a rhtymn on the final two drives of the first half — both scoring drives — but in the second half the Steelers somehow went away from what was working until late in the game. On the final two drives of the game, Pickett played well…until he didn’t. He had some big time throws to Pat Freiermuth, Chase Claypool and Diontae Johnson, but then stared down Johnson on the third and 16 throw that was intercepted by Miami’s Jevon Holland.

Then, he threw an ill-advised bad ball to Johnson while scrambling, resulting in the interception by Noah Igbinoghene to seal the win.

Overall, there was some good, some really bad from Pickett. That’s going to come from rookies at the position. There will be growing pains like Sunday night. Short term pain for hopeful long-term gain. That said, the short-term pain was brutal from Pickett. Those two picks let a winnable game slip through the cracks.

For the most part I thought Najee Harris looked good once again, especially as a runner. He had some explosiveness at times, ran hard downhill and a slight resemblance of a run game for stretches in the loss to the Dolphins.

He couldn’t convert on a third and short though, resulting in the Steelers punting the football in the second half, which was rather cowardly from Mike Tomlin. Overall though, there were signs of life from the run game with Harris, especially when the Steelers lined up under center and ran the football between the tackles.

On the night, Harris finished with 17 carries for 65 yards and added three receptions for 15 yards offensively, most of which came on his rather impressive 12-yard catch and run in which he forced a number of defenders to miss in space.

Behind Harris, Jaylen Warren again played well in pass protection in front of Pickett, giving the rookie quarterback time in the gun. He added just two carries for seven yards, one of which converted a fourth and short, and added two catches for 17 yards. He’s playing more on third down than anything, giving Harris a breather while giving the Steelers an upgrade in pass protection.

George Pickens finally caught his first carer touchdown, and it happened to be a spectacular display of body control and field awareness. Par for the course for the great rookie receiver. Prior to the touchdown, Pickens was targeted heavily, eventually ending the first half with four catches for 47 yard and a score.

After that, he wasn’t targeted until late in the fourth quarter, finishing with six catches for 61 yards, including a 30-yard strike from Pickett down the left sideline in the second quarter on a busted coverage from the Dolphins. He continues to look rather impressive, but he needs more work.

Diontae Johnson was mostly fine on the night, finishing with five catches for 42 yards, making some defenders miss in the open field on the final two drives of the game, creating some YAC in the process. Targeting him on a 50/50 ball on the final play though isn’t what the Steelers should be doing.

Chase Claypool again showed up late in the game as a chain-moving receiver, finishing with four catches for 41 yards, moving the chains twice on the final two drives. He was open in the middle of the field at least twice on routes in which he wasn’t targeted. Pickett and the Steelers will see that in the film session.

Outside of the work as receivers, I need to see more from Claypool and Pickens as blockers. Claypool, asked to block Melvin Ingram on a toss sweep, failed to get a hat on Ingram which led to a missed tackle. Tough assignment, but one Claypool can do a passable job on. Pickens just hasn’t quite made that impact as a blocker this season that everyone was expecting.

In his return from a concussion that kept him out of Week 6, Pat Freiermuth was outstanding once again. He led the Steelers with eight receptions for 75 yards in the loss, including a clutch 4th and 6 catch on a beautiful ball from Pickett for 21 yards.

Zach Gentry had two catches on a screen pass and a shovel pass for a total of zero yards. That’s not his game. Connor Heyward had a nice 6-yard catch and run in the second half in which he came from across the formation behind the line of scrimmage, ran over a defender in the flat and then made the catch and lowered his head. I’d like to see him get a bit more work as a receiver moving forward over Gentry.

Pickett was hit just six times on 46 drop backs and was sacked just twice. Throughout the game the offensive line held up well in pass protection and even opened some lanes for Harris on the ground.

Overall, the performance by the Steelers offensive line was decent, probably better overall than I expected, but the pre- and post-snap penalties are just absolutely killer from this group, especially the illegal shift and then subsequent holding that all but killed a drive.

At times on Sunday night, Cameron Heyward and Larry Ogunjobi played at a high level for the Steelers in the trenches defensively.

It wasn’t consistent enough or impactful enough though to slow down the Miami’s rushing attack, which ripped off a total of 111 yards on 27 carries on the night. Raheem Mostert had open lanes to run through throughout the night, providing Miami with major balance.

From a pass rush perspective, nobody up front generated any sort of pressure against Tua Tagovailoa, nor did they knock any passes down at the line of scrimmage. Ogunjobi and Heyward did combine for a massive fourth-down stop to force a turnover on downs, but that was about the only impactful play from the two.

For the second straight week I really, really liked what I saw from Myles Jack and Devin Bush inside. Those two attacked downhill against the run, made plays in space and really played some sound football against the Dolphins. The duo combined to record 16 tackles, finishing as the top two tackles for the Steelers on the night.

On the outside though, it was mostly a mess.

The Dolphins threw a ton at Alex Highsmith from a pass rush perspective, causing him to try and work through a number of blockers just to create pressure. Needless to say, he didn’t create much pressure in the loss.

Neither did Malik Reed, who has been mostly a zero from a pass rush perspective without T.J. Watt in the lineup. That said, Reed recorded the lone quarterback hit for the Steelers on Sunday. Should tell you all you need to know.

If you would have told me coming into the game that the Steelers would hold Tagovailoa under 300 passing yards and Tyreek Hill to under 100 receiving yards, I would have questioned your sanity.

That’s exactly what happened though. Why so low on the grade though? Because they can’t catch the football and gave the Dolphins’ offense new life at least four times in the one-possession loss.

Terrell Edmunds, Cameron Sutton and Levi Wallace all dropped interceptions. In Wallace’s case, he dropped two. One of Wallace’s drops and Sutton’s drop resulted in field goals for the Dolphins, proving to be the difference in the game. Those plays are made, maybe it’s a much different story.

Outside of that though, I was relatively pleased with the coverage throughout the night. Wallace did a decent job staying on top of Hill, tackling him after the catch underneath. Same for Sutton and James Pierre. Arthur Maulet struggled in coverage at times, allowing a 32-yarder to Trent Sherfield and a 21-yarder to Hill, but he played well coming downhill when in the box. That’s his role. Asking him to do more is a stretch.

Minkah Fitzpatrick was great playing the lurk/robber role Sunday night. Once deployed in that role he helped shut down the middle of the field for the Dolphins’ passing attack, allowing the Steelers to get back into the game. Outside of the dropped interception, Edmunds played very well again, recording a tackle for loss and a pair of pass breakups, saving a touchdown on both.

Chris Boswell drilled his lone field goal attempt on the night from 45 yards, making it look easy. Looks like the foot is relatively fine at this point in the season.

Punter Pressley Harvin III continues to be rather Junior Varsity, and a change might need to be made there at this point. Harvin’s first punt of the night went 23 yards, giving the Dolphins a short field. He bounced back in a decent way after that, averaging nearly 46 yards per punt with a long of 57 and two punts downed inside the 20, but the 23-yard punt is just so hard to look past.

He’s so inconsistent and it’s hurting the Steelers.

The return game was strong even without Steven Sims. Gunner Olszewski bounced back in a nice way, running with determination on some returns in the loss. Most importantly, he took care of the football.

Coverage was very good too on Sunday, holding Mostert to just 28 return yards on two returns, one of which he muffed and had to fall on.