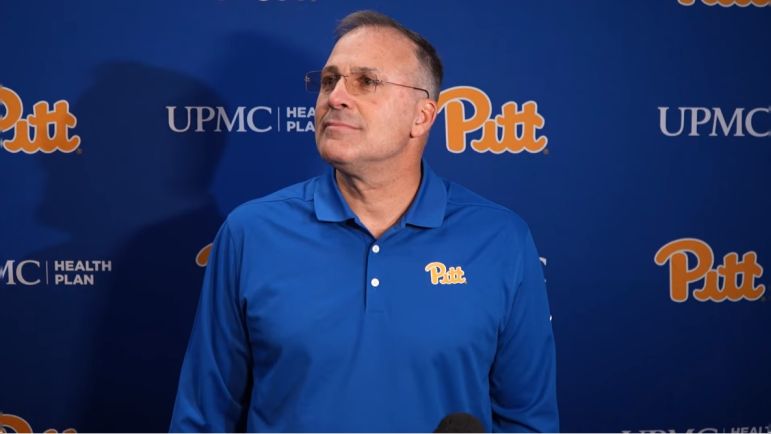 There is not much to smile about as a Pittsburgh Steelers fan following the Week 4 loss to the New York Jets. Nothing besides getting the first look at the team’s first-round pick quarterback out of Pitt, Kenny Pickett, in the second half, that is.

After choosing to stay a fifth season in college, Pickett put together an incredible season, putting his name down as a Pitt legend. Pat Narduzzi, who was Pickett’s head coach for his tenure as a Panther, extended his congratulations to the rookie quarterback on Monday.

“I’m happy for him,” Narduzzi said in a Monday press conference according to a Twitter video by Amanda Godsey of Tribune-Democrat Sports. “I think he’s only going to get better with reps. I’m happy for Kenny and his family, and we’ll see how it goes.”

Pat Narduzzi on Kenny Pickett’s Steelers debut:
“I’m happy for him. I think he’s only going to get better with reps. I’m happy for Kenny and his family, and we’ll see how it goes.” pic.twitter.com/auSXjG6dhJ

Pickett’s trajectory to becoming a first-round pick was unlikely. If it wasn’t for the extended eligibility for players after the 2020 season that he took advantage of, he likely would have not sniffed the first round at all. However, Pickett decided to stay at Pitt for another season, and the rest is history.

The Panthers 2021 saw them get an 11-2 record and win an ACC Championship game, their best outing since 1976. Pickett was a Heisman finalist and First Team All-American, racking up 42 touchdowns for the Panthers. As a result, he was given the unique opportunity to stay in Pittsburgh and play for the Steelers, becoming the first quarterback selected in 2022 and former General Manager Kevin Colbert’s last ever first-round selection.

Having coached Pickett for five seasons at Pitt, this may be one of Narduzzi’s proudest moments for his alumnus. While Pickett’s performance was up and down, he had a few highlight throws and showed poise, namely his completion to tight end Pat Freiermuth after taking a hit. While Pickett threw three interceptions, Pro Football Focus charted him with zero turnover-worthy plays and a 71.6 passing grade. Granted, this is questionable given his second interception being on a poor decision, but it is a sign of optimism. Also, Pickett has an intended air yards per play average of 9.92, which is a number that this offense is vying for due to a lack of big plays.

As Narduzzi stated, we indeed have to wait and see how it goes, and only time will tell. However, if one thing is for sure, it’s that Pickett’s debut was a proud moment for Pitt.