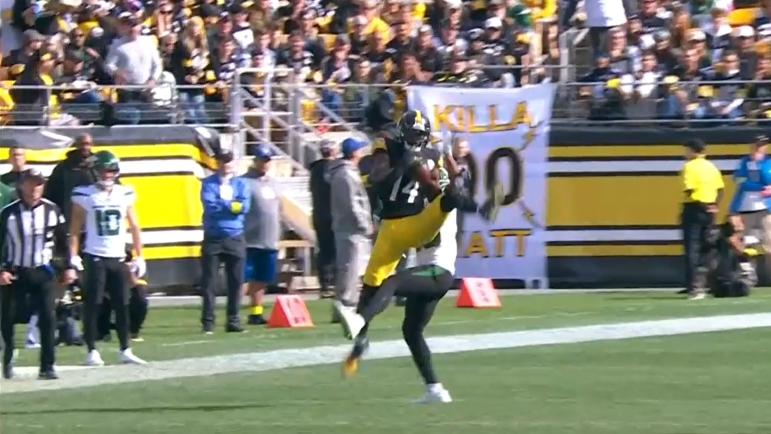 Kenny Pickett’s QB Coach Tony Racioppi went on 93.7 The Fan Tuesday morning and spoke about Pickett’s first regular season action this Sunday against the Jets when he went in during the second half after starting QB Mitch Trubisky was benched.

After talking about his impression of Pickett’s first performance and the mindset he has to be a successful NFL QB, Racioppi was asked about fellow Steelers rookie WR George Pickens and the performance he had on the afternoon after displaying some chemistry with his star pupil. Racioppi responded lauding over Pickens and his immense ability, wishing he had a player of his caliber back when he coached college football.

“I did not,” Racioppi said regarding having a player like Pickens at Rowan University on 93.7 The Fan. I wish I had George Pickens, man. I went to training camp for two days, guys, and it was like a show. Like, I told Kenny [Pickett] after, I’m like, ‘He’s ridiculous.’ Like, it’s almost too easy for him sometimes. So, I wish I did, you know, I definitely wish I did.”

Pickens grabbed headlines from training camp in Latrobe, PA early on for his incredible circus catches and his ability to win the jump ball in contested coverage with some of Pittsburgh’s best defenders covering him. That playmaking ability followed him into the preseason after he made some impressive catches against the Seahawks. Pickens would continue to do that in regular season action as well, now coming off a six catch, 102-yard effort against the Jets and is just one week removed from likely making the catch of the year against the Cleveland Browns.

The gift that keeps on giving. #GameDayCoverage

The is no doubt that George Pickens has the makings of being a special player in the league for a long time, possessing the talent and upside to become a true WR1. Pittsburgh opted to pair their hopeful future franchise QB with Pickens after selecting him in the second round of the 2022 NFL Draft, falling to the second day due to a lack of a 2021 season while he rehabbed from a torn ACL he suffered that spring.

The Steelers were confident in Pickens’ recovery process and appear to have hit a home run. If Pickett continues to develop into a starting-caliber QB and Pickens’ role in the offense continues to expand with each passing week, we could see a fair amount of the Pickett to Pickens connection going forward this season and for many seasons to come.

Slow-mo back shoulder from Pickett to Pickens #Steelers #NFL pic.twitter.com/Hw5wBzc5Je