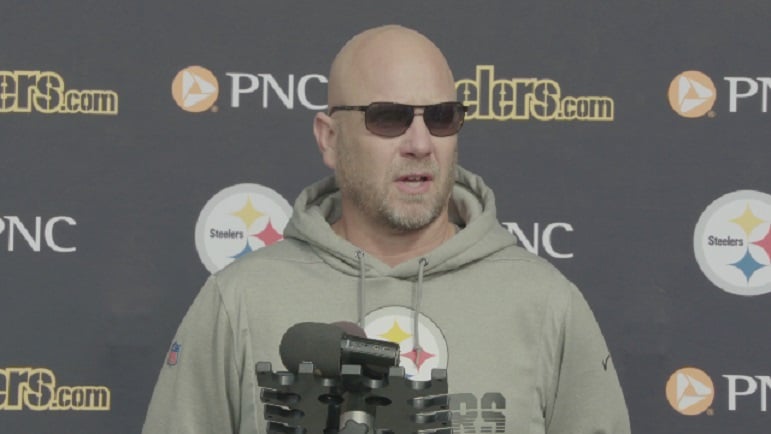 Pittsburgh Steelers rookie WR Calvin Austin III has recently returned to practice this week after missing nearly two months with a foot injury suffered in the beginning stages of training camp this summer, landing him on short-term IR to start the year. Pittsburgh opened the 21-day window for Austin’s return to the active roster but have yet to activate him off IR and add him back into the fold in terms of being active on gameday.

Austin spoke to the media earlier last week and said that he doesn’t believe that he’s missed to much time and feels like he is physically and mentally ready to contribute once the coaching staff deems him ready to activate.

However, OC Matt Canada poured some cold water on the prospect of Austin coming back this week against the Tampa Bay Buccaneers, stating that the young WR has missed a fair amount of time and needs to catch up with what the offense is doing before being ready to play.

“He’s missed a lot,” Canada said Thursday to the media on video from Chris Adamski’s Twitter page. “It’s hard on both fronts. He comes back a little bit rusty, and then just getting back into full speed, and then obviously as Coach [Tomlin] always says, jumping on the moving train. I think there is some validity to that. What reps can you take from somebody else is kind of where we are at right now.”

Steelers OC Matt Canada on if WR Calvin Austin III can return to the active roster this weekend pic.twitter.com/mIuF61JTBP

Ray Fittipaldo of the Pittsburgh Post-Gazette also tweeted out that Canada and the rest of the coaching staff are trying to figure out where Austin may slot into the offense at this point in time after not having him throughout training camp and the preseason, which were key development periods to install certain packages for their skill position players.

Matt Canada said the Steelers are trying to figure out where Calvin Austin fits in his offense. Missed time is a big factor in whether he has a role at some point this season.

While Austin may feel 100% and ready to get back out there, there is some validity to what Canada said in terms of getting him up to speed after missing so much install time in the early stages of the season. On the other hand, Austin would provide Pittsburgh with a much-needed spark on offense, having the speed, quickness, and run after catch ability the offense has sorely been missing to start the year, especially at the WR position.

Personally, I would much rather see Calvin Austin III on jet sweeps, WR tunnel screens, and quick hitters to the outside or middle of the field than Gunner Olszewski, Diontae Johnson, or Chase Claypool to see what he can do with the ball in his hands. Austin was a YAC daddy during his time at Memphis, which was partially the reason why Pittsburgh opted to double-dip at WR in the 2022 NFL Draft. Given the predictiveness and blandness of Canada’s offense up to this point, adding a player like Austin into the fold likely isn’t going to make matter much worse as they are pretty bad as it is. The potential reward, however? A player with legit home run speed that defenses must account for, which in turn could open up other parts of a stagnant offense.