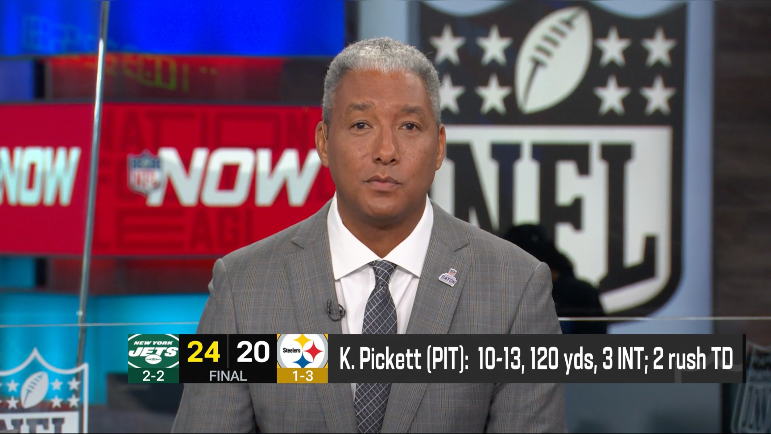 Off to a 1-3 start for the second straight season, it’s hard to find much optimism around the Pittsburgh Steelers at the moment, outside of the switch to rookie first-round quarterback Kenny Pickett at halftime on Sunday against the New York Jets at Acrisure Stadium.

Though the switch ultimately didn’t lead to a victory for the black and gold, the move certainly gave the Steelers a shot in the arm, one that Tomlin stated he felt the team needed after the loss. While Tomlin didn’t commit to anything moving forward under center after the loss, it’s hard to envision the 16th-year head coach going back to the veteran Mitch Trubisky after yanking him at the half in Week 4.

Despite the ugly record and the poor play on both sides of the football at the moment, coupled with Diontae Johnson’s comments after the game regarding the Steelers being in a “rebuild,” NFL Network’s Steve Wyche attempted to put an end to that discussion after the frustrating Week 4 loss, stating that the Steelers aren’t in a rebuild just because they transitioned to Pickett so early.

“We knew this moment [the switch to Pickett] was coming at some point during the season,” Wyche said on NFL Network Monday, according to video via NFL.com. “…The fact that the whole division is down, they had to make this move. The fact that they drafted Kenny Pickett in the first round, they knew they had to do this. They knew Mitch Trubisky was a band-aid.

“…Pittsburgh is not in a rebuild; that doesn’t happen,” Wyche added.

Wyche: 'Pittsburgh is not in a rebuild' after 1-3 start to '22 https://t.co/lZplGNiilC #Steelers pic.twitter.com/mADph26NE9

The 2022 season could always be viewed as a year of transition, and rightfully so, considering the amount of changes that occurred in the front office, on the roster, and even with the stadium naming rights, as well.

While the changes from the outside could be looked as a rebuild on the fly,  the Steelers are never — and were never — going to go through a rebuild, even if that come across as a bit stubborn in today’s NFL.

Sitting at 1-3 certainly isn’t a good feeling for the Pittsburgh Steelers, but expectations don’t change, even with the transition to Pickett and the likely growing pains that will come with the rookie being under center. A rebuild isn’t happening though, and quite honestly it’s hard to see a season worthy of a rebuild happening, especially once star outside linebacker T.J. Watt returns to the lineup.

Maybe the switch to Pickett rejuvenates this team and they get back to their winning ways. Who knows.

One things is for certain though: there’s no rebuild happening in Pittsburgh at the moment.