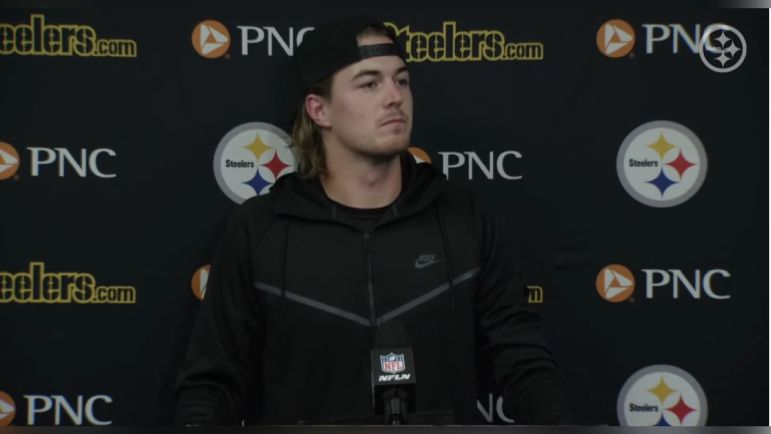 Coming off a three interception performance in Sunday night’s loss to the Miami Dolphins, Kenny Pickett’s NFL.com stock took a dive. In Marc Sessler’s weekly quarterback rankings, Pickett fell five spots to #30 in the league, only ahead of the Jets’ Zach Wilson and Broncos’ Brett Rypien.

Here’s what Sessler had to say about Pickett.

“Pickett tossed another trio of picks in Sunday night’s rough-and-tumble loss to the Dolphins. The third interception was a ghastly underthrown lob snagged at the goal line by a leaping Noah Igbinoghene. Still, there are moments — individual throws — that remind you of the rookie’s promise: This laser up the seam to Pat Freiermuth was something special. Pickett’s all over the map inside a limited offense with protection issues, a bottom-six ground game and a lack of identity. Patience is required.”

Some of that assessment is fair, some of it is not. To call Pickett’s third pick an “underthrown lob” isn’t fully accurate. As he explained after the game, Pickett was trying to throw back-shoulder to the front pylon while WR Diontae Johnson ran to the back pylon. Miscommunication in a scramble drill between two players who haven’t been in many of those moments. Pickett’s decision is still ripe for criticism, he admitted needing to just run with the football, but the clarification is an important one to make.

As Sessler notes, Pickett made a couple of impressive throws and isn’t getting help from a still-lackluster running game. Much has been put on Pickett’s shoulders, throwing 52 and 44 times in his two full starts this season. He’s on pace to throw 444 passes this year despite not starting the first three games and playing halves of two others. Extrapolate that over a 17-game season and he’d be over 530 attempts. Compare that to rookie Ben Roethlisberger, who threw the ball 298 times his rookie season and never threw more than 28 times in a regular season game. In fact, he didn’t have his first 50+ attempt game until well into his third season. Different eras, different teams, but the offense is revolving around Pickett. That wasn’t the Steelers’ plan.

Though Pickett’s #30 ranking looks harsh, the proof is in the pudding. Quarterbacks don’t have full control over outcomes but they bear the brunt of the responsibility. And the reality is he’s thrown just two touchdowns to seven interceptions (his 5.5% INT rate is second-highest in the league) while the Steelers’ offense has scored 13 points in the two games he’s started and finished. Sessler’s right patience is required and again, those big-picture numbers leave out important context, but there will come a point when production and results are all that matter. That’s what Pickett and this offense is working towards. Until that changes, he’ll find himself in the basement of these rankings.