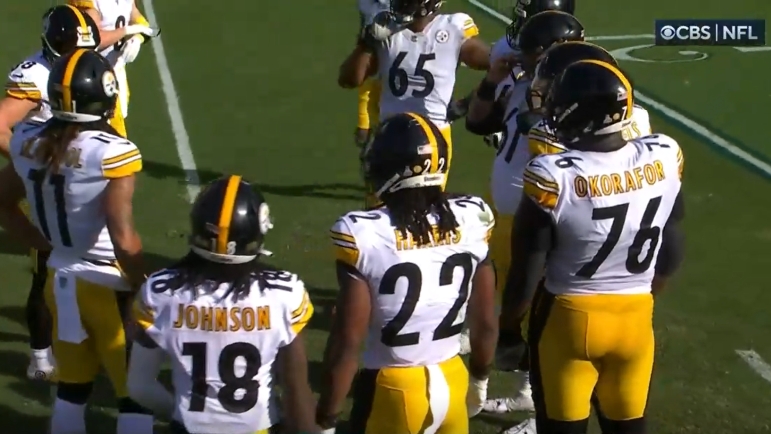 The Pittsburgh Steelers have never finished a season under head coach Mike Tomlin with a losing record, but they are getting dangerously close to that territory. They are now 2-6 at the bye week after losing in a blowout to the Philadelphia Eagles earlier today in a performance that exhibited all of the key ingredients that, according to their starting running back, the team lacks.

Najee Harris told Joe Rutter of the Pittsburgh Tribune-Review after today’s game that there are three ingredients the Steelers lack right now: “experience, discipline, and accountability”. I’m not sure anybody who watches the games would really disagree with that.

Now, ‘accountability’ is on the vague side and hard to visually quantify, but we certainly see the lack of discipline and experience show up on a weekly basis. How else can you explain the weekly illegal formation penalties? How are you offsides on a kickoff?

The penalties are a big problem this season, but of course it’s merely one of many. And the variety of ways in which they have inflicted untimely penalties upon themselves, particularly on offense, is really starting to become an art.

We also see that in other ways, however, on both sides of the field, particularly when it comes to finishing plays. Receivers not getting their feet in-bounds, running backs—Harris specifically—giving up yardage, defensive backs not finishing plays at the catch point.

But when we’re talking about a lack of experience, you have to start with the rookie quarterback, Kenny Pickett, who has had more than his fair share of rookie moments in the early portions of his career. No matter how ‘veteran’ he might look on average on a play-to-play basis, he has made numerous key mistakes, which opposing defenses have been making him pay for.

The Steelers are now heading into their bye. What can they even do to address these issues? Are they even correctable this season? It doesn’t feel that way.