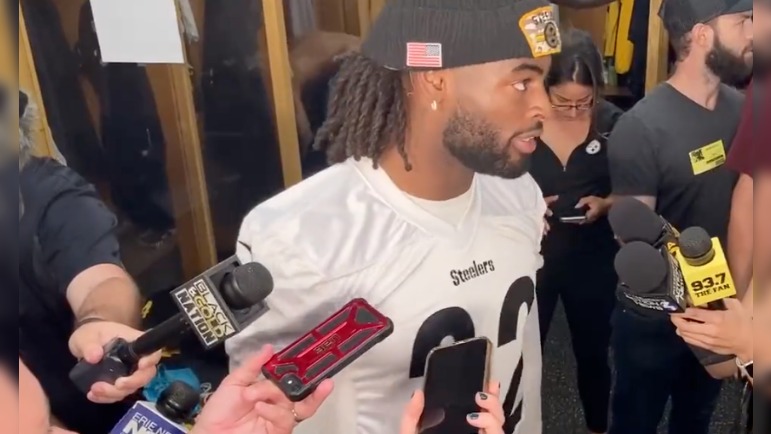 Tension is in the air currently in Pittsburgh with the Steelers trying to find themselves both offensively and defensively after having the 2022 season take a turn for the worst.

RB Najee Harris knows that the expectations haven’t been met by this team based on the standard that has been set by HC Mike Tomlin and owner Art Rooney II, but he understands that this team needs to start doing the little things better in order to see change in the big picture moving forward.

“Sure man, every week is”, Harris said regarding the importance of this week’s practices on video from Chris Adamski’s Twitter page. “The small things matter. Every week is a new challenge and obviously this one we got a new team. Stacking those bricks and do the little things and persevere. I think that this has been a good week.”

Najee Harris on the week of practice for the Steelers, who are on a 4-gm losing streak pic.twitter.com/GINr620jvt

Harris was not his same joyful, flamboyant self speaking to the media this time compared to the early stages of the season. Who could blame him with Pittsburgh on a four-game skid after taking the worst loss the franchise has suffered since 1989. Harris particularly hasn’t been playing his best, being likely bothered still by a Lisfranc foot injury suffered in training camp that was reaggravated early in the season. Since then, Harris has struggled to get anything going on the ground while seeing his passing down work given to UDFA Jaylen Warren who has impressed since signing with the team after the draft, outplaying Harris in several aspects of the game thus far.

The small things do matter as Harris mentioned, and Pittsburgh frankly hasn’t been executing them. Whether it be converting on third down, stopping the run, or finishing drives in the red zone, the Steelers simply haven’t been able to play a full 60 minutes this season. In uncharted waters with the Buccaneers coming to town this weekend with their skill position players getting healthier at QB Tom Brady’s disposal, Pittsburgh will have to adapt fast if they want to prevent this Sunday’s game becoming a laugher early on like last week did.