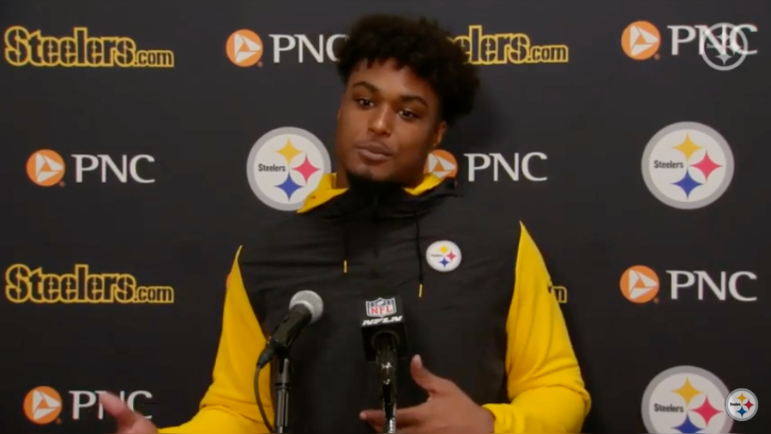 While the Pittsburgh Steelers are coming off a crushing defeat to the Miami Dolphins, one thing to smile about is the defense’s performance against a high-powered offense.

After allowing an opening-drive touchdown, the defense stepped up significantly for the rest of the game, not allowing Miami in the end zone and shutting them out in the second half. Inside linebacker and quarterback of the defense Myles Jack was asked about the defense’s performance in a post-game press conference on the team’s YouTube channel and did not mince his words about what this group is capable of.

“I feel like we’re gelling at the right time,” Jack said when asked what the key difference this group made to have two consecutive strong performances after struggling early in the season. “I think everything’s coming together. Guys are figuring out where they need to be. We’re implementing roles, the coaches are. I think they’re getting a better feel of what we got and I feel like it’s all coming together at the same time.”

After the first Miami drive, where they marched down the field in a little over four minutes to open the game with a touchdown, the game looked like it may get out of hand early. Miami’s second drive, which went for 59 yards on 8 plays, saw the Steelers’ defense bend but not break, holding them to a field goal. The Steelers’ defense continued to bend but not break in the first half and was nearly flawless in the second half outside of a few dropped interceptions.

The defense looked the part for the second half, and the rampant mistakes and blown coverages were limited. After several games under their belt, this group appears to have established the requisite chemistry.

“We’re a special defense,” Jack continued. “We’re capable of a lot of things, you know, we gotta start out stronger. For example, the story of the day today was just starting out strong that first quarter, because it started out crazy, but then we got it together.”

From a talent perspective, the word “special” may not be a stretch. This defense kept a struggling Steelers’ offense in the game until the end and performed well despite often not getting to rest for long.

The defense is also coming off a commendable performance against quarterback Tom Brady and the Tampa Bay Buccaneers. Of course, the four dropped interceptions hurt and may have altered the outcome. However, pitching a second-half shutout against an offense that features speedy receivers in Tyreek Hill and Jaylen Waddle is no easy task, and the defense arguably cannot be blamed for this loss.

This defense is soon getting back its best player in reigning Defensive Player of the Year T.J. Watt after the bye week. With Watt playing in the first game, this group put together seven sacks and four interceptions on the road against Cincinnati Bengals quarterback and reigning AFC Champion Joe Burrow.

For now, they will prepare to face the only undefeated team in the NFL the Philadelphia Eagles, whose offense is no joke. Another elite performance by the defense is a must, as a loss to the Eagles will lead to 2-6 start that even Watt may not be able to save this team from.