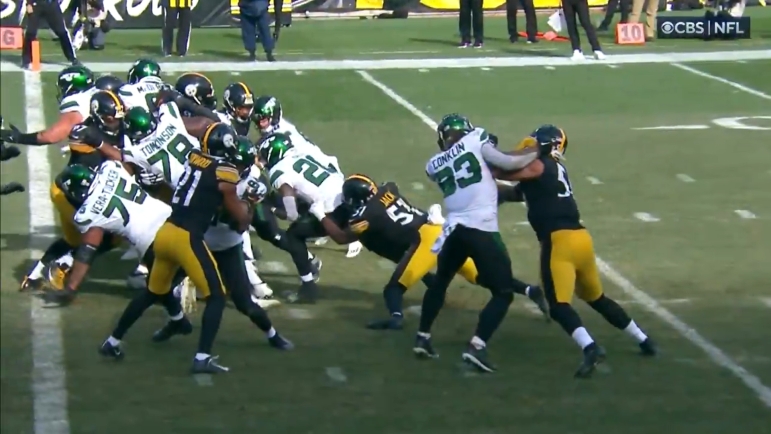 There might be some solace a competitor can take in saying that you lost a game because you beat yourself rather than saying that your opponent was simply better than you, but you don’t get an asterisk, nor a sticker, next to that loss.

The Pittsburgh Steelers have a very proud defensive unit—and a well-paid one—licking its wounds after failing to prevent the team from going on a three-game losing streak, sitting at 1-3 through the first quarter of the season. While the offense has not shouldered its share of the burden, the defenders know they have to do more to keep games close, and it starts with cleaning up their own issues so they can play to their ability.

“We’re very confident. Once we go through the plays and our mistakes and everything, we mainly feel like we’re beating ourselves”, veteran inside linebacker Myles Jack told reporters on Thursday via the team’s website.

“It’s not like a talent thing or anything like that. We just feel like we’ll make a mistake or there might be a miscommunication that the offense just finds, and in the NFL, if you make a mistake, they’re gonna catch you. You just can’t do that”.

Jack himself had a huge mistake at the end of Sunday’s game. He had a one-on-one shot at New York Jets running back Breece Hall at the goal line. He went low and missed, resulting in the rookie scoring the game-winning touchdown.

The scenario elevates and magnifies what is otherwise typically a minor mistake, but head coach Mike Tomlin stresses clean play on weighty downs, and a goal line stand with the game on the line would certainly have some weight to it, I would imagine.

That’s not to knock him overall, by any means. A free agent signing this offseason, he has been a welcome addition to the starting lineup at inside linebacker, especially in comparison to the level of play we have gotten there in recent years.

He already has 44 tackles through the team’s first four games, well on pace to shatter his own career single-season tackle record. Two of those tackles have come behind the line of scrimmage. While he’s still looking for his first sack (they haven’t been blitzing him a lot), he has a pass defensed in coverage and has generally held his own in that department.

But it’s really about the elephant in the room, and that elephant has a strained pectoral that will keep him sidelined for at least another week. No unit that has T.J. Watt is going to play at near the same level without him, that’s just a fact. But they haven’t been able to produce enough to fill the void in his absence.

The front seven has presented issues, but so too has the secondary, particularly in coverage in the slot and on the left side. Arthur Maulet was burned multiple times as a coverage slot defender Sunday, which is not his strong suit and a role the team tries to keep him out of, but injuries made that a tough assignment.

They can’t afford to have many mistakes against an offense as good as the Buffalo Bills’. They may have caught them sleeping in the opener last year, but they’d better not expect such good fortunes two years in a row. If they beat themselves, or if the Bills do, it’s going to come out the same, but at least you can give yourself a chance.