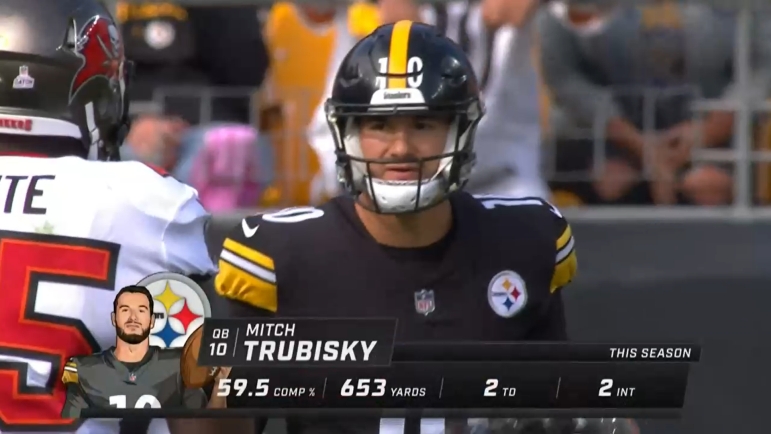 In a shocking victory for the Pittsburgh Steelers, an unlikely hero emerged for them. After rookie quarterback Kenny Pickett went down with a concussion in the third quarter, Mitch Trubisky took his place and led the team to the unlikely victory. In doing so, he arguably played his best few drives of the season, leading a touchdown drive and converting several third and longs. When asked if he felt relaxed and confident during the game as opposed to others, Trubisky conceded that he may indeed have.

“Yeah, I felt relaxed,” Trubisky said in his post-game interview on the team’s YouTube channel. “I like to think I’m usually relaxed even when I start. Maybe I was more relaxed, I’ll try to do whatever I did in the second half, and continue to carry that going forward. So you try to duplicate that, but I think it’s just 11 guys playing as one. I went in there, really tried to play free. We tried to stay aggressive if I looked relaxed. I mean, I felt relaxed, it felt good. So we gotta, I would love to duplicate what we did.”

The defensive performance will and should highlight this victory for the Steelers. The team played without their top three cornerbacks and All-Pro safety against arguably the greatest quarterback of all time in Tom Brady, and held him to one touchdown. The defense also arguably made the game-winning play, as the pass deflection by linebacker Devin Bush on the Buccaneers’ two-point conversion wound up being the difference. To say that this performance was shocking is an understatement.

However, the Steelers do not win this game without the play of Trubisky. After coming in to replace Pickett, the team got just the offensive spark they needed to come out on top. Not to mention, he had an impressive stat-line, completing 9/12 passes for 144 yards, and a touchdown, as well as a 142.4 passer rating. This performance by Trubisky, though it was in limited playing time, arguably showcased some of the best quarterback play the team has seen in the past several seasons.

Trubisky led a crucial touchdown drive to give the team a 20-12 lead, which wound up being the game-winning score. The first-year Steeler threw the team’s first play of over 40 yards in a pass to back-up tight end Connor Heyward  In doing so, he diagnosed extra defenders on the field and snapped the ball for a free play.

Aside from the touchdown drive, Trubisky also converted several long third downs in crucial situations. This included a 3rd and 15 and a 3rd and 11 in the game’s final drive, which wound up burning out the clock and not giving Brady a chance for a game-winning drive. Trubisky also helped receiver Chase Claypool have his best game of the season, as he was often the go-to third down target for Trubisky.

The Steelers quarterback situation is a bit more uncertain now, as the team is awaiting the timeline for Pickett’s concussion. That said, Trubisky outplaying and beating Brady for what is likely the last time the Steelers face Brady will not soon be forgotten.