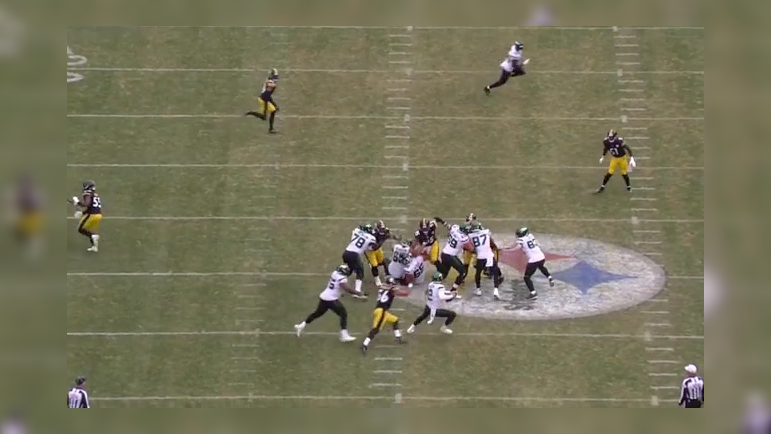 Through four games, aside from the inability to get stops late in games on the defensive side of the football, there’s been one real constant with the Pittsburgh Steelers that has hindered their ability to win games overall.

That would be in the tackling department, where the Steelers — outside of the strong Week 1 showing against the Cincinnati Bengals — have missed an average of just under nine tackles per game. That includes back-to-back weeks of double digit misses against the Cleveland Browns in Week 3 and the New York Jets on Sunday in Week 4.

Without T.J. Watt, the Steelers defense needs to be sound in all phases of the game. They haven’t done so in the most important in recent weeks, that being tackling.

Let’s dive into the Week 4 missed tackles report from the 24-20 loss to the New York Jets.

Third-year outside linebacker Alex Highsmith is undoubtedly kicking himself after this one, especially after missing two opportunities to add to his league-leading sacks mark, missing two tackles on sack attempts in the loss to the Jets. Without Watt opposite him, Highsmith has turned his game up another notch.

He continues to get to the passer at a high level overall, but his two misses on Sunday were tough to see, considering how good he has been.

The first one is tough to watch because of the move that Highsmith puts on Jets rookie right tackle Max Mitchell in space, easy ripping inside of him to get a free lane to Wilson, who dropped back rather deep in the pocket off of play-action. That should have gone down as a 10-yard sack, but Highsmith just isn’t able to corral him in the pocket, leading to Wilson stepping out of his tackle attempt and eventually firing the football out of bounds to avoid the loss and live to fight another down.

Later in the game, Highsmith had a free run at Wilson from his blindside on a play the Steelers really needed.

Highsmith wins off the edge quickly, getting underneath left tackle Alijah Vera-Tucker before turning the corner and getting after Wilson. He seemingly has him dead to rights, but Wilson again proved to be rather slippery with great pocket presence and awareness, feeling Highsmith bearing down on him.

You can see how exasperated Highsmith is that he was unable to finish not one, but two plays at the end of each clip. He was smarting after the game that he and the defense didn’t do enough to win the game, and these two missed opportunities undoubtedly were on his mind.

Along with Highsmith, the secondary really struggled in the tackles department again. That’s becoming a real concern for the Steelers, especially with how banged up that unit is right now. Not only is everyone dealing with some sort of injury, they aren’t tackling very well overall, outside of Minkah Fitzpatrick and Levi Wallace.

On Sunday against the Jets, it was Arthur Maulet and Cameron Sutton that struggled in the tackling department.

Maulet played a ton of snaps against his former team due to injuries in the secondary. In the fourth quarter, the Jets went right at him any time they could. Here on third and long, the Jets got rookie wideout Garrett Wilson isolated on Maulet in the slot and won quickly on an over route.

It wouldn’t have been such a negative play for the Steelers if Maulet makes the tackle at the catch point. Instead, he misses badly, putting second-year safety Tre Norwood in a tough spot in the open field. Norwood then misses as a Wilson in a Jets uniform again proved to be slippery, before Minkah Fitzpatrick cleans it up at the end of a 35-yard gain.

From the initial miss by Maulet to Fitzpatrick’s tackle, the pair of missed tackles resulted in roughly an extra 17 yards for Wilson. That’s painful.

One man making his debut on this list is veteran defensive tackle Larry Ogunjobi. He had a terrific game against the Jets on Sunday, but I wanted to highlight this missed tackle he had on Michael Carter in the first half.

It’s a good example of just how dominant Ogunjobi was in the trenches, but also showed how the Steelers defense came up just short at times.

His lateral explosion here to get around the down block from New York center Connor McGovern is absolutely absurd and shows that he’s fully healthy in his return from that LisFranc injury suffered last season with the Cincinnati Bengals. Not only is getting around McGovern absurd, he then slips the block of Braxton Berrios with ease and is right in position to make the stop on Carter.

He can’t quite finish the play though, missing out on the tackle for loss, but it was a great show of explosiveness from Ogunobi that should have the Steelers excited for what’s to come with the veteran.

Offensively, the Steelers forced just six missed tackles in the loss, meaning they lost the tackle battle with a season-worst mark of -4, dropping them to 1-3 in that category on the year, ironically.

Offensively, things were much better on Sunday against the New York Jets — especially in the ground game — than they’ve been in quite awhile.

There were plenty of holes available, the running backs ran hard, and once Kenny Pickett was inserted into the lineup the offense seemed to take off a bit.

That’s a positive sign moving forward, especially for some weapons in the passing game that could create more after the catch with Pickett than they could with Trubisky.

One guy that doesn’t need much help creating on his own is Najee Harris, who again led the Steelers in forced missed tackles on Sunday.

I really liked seeing the Steelers get him out in space on the ground with multiple lead blockers in the first half. He did a great job here running behind center Mason Cole, staying patient, and then running through CJ Mosley’s arm tackle before getting some help from James Daniels to pick up another five yards at the end of the run.

In the second half, with Pickett in the game, Harris saw some major holes in the middle of the Jets defense and took advantage.

Again, the patience and vision showed up in a big way as Harris let the play develop in front of him and then found a lane off the hip of Zach Gentry and James Daniels, eventually running through the tackle attempt of Marcel Harris to pick up another 10 yards, moving the chains and providing the Steelers’ offense with a major spark.