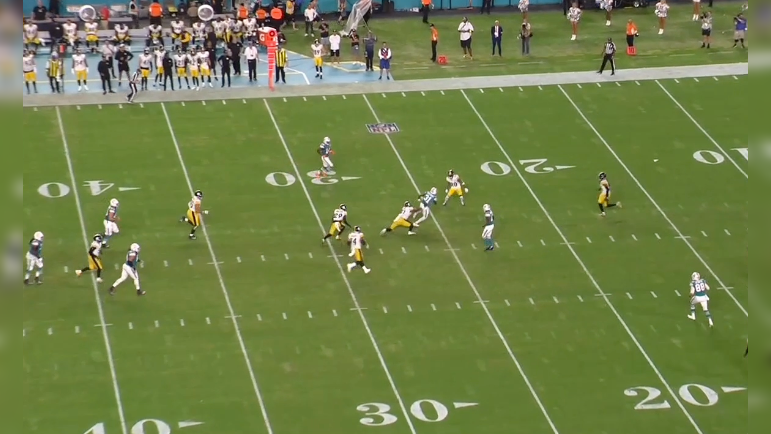 Slowly but surely, the Pittsburgh Steelers’ defense has shaken off a brief early-season lull in the tackling department, returning to a high level of play in that area of the game.

Last week, the Steelers tied the season-best mark of just six misses in the win over the Tampa Bay Buccaneers.

This week, despite a 16-10 loss to the Miami Dolphins on the road on Sunday Night Football, the defense took it one step further, setting a new season-best mark for fewest missed tackles in a game, recording just five misses overall. That’s a phenomenal number against an offense that thrives in yards after catch situation.

The Steelers were focused on not getting beat deep, keeping things in front of them and tackling the catch. They did that at a high level on Sunday night.

Just five missed tackles against the Miami Dolphins is really impressive from the Steelers defense.

They did a great job of tackling the catch, limiting the number of big plays from the Dolphins after the first three drives of the game, which led to adjustments from Mike Tomlin, Teryl Austin and Brian Flores.

Defensive tackle Larry Ogunjobi again had a rather strong game overall, but he did miss his second tackle of the season on the second drive of the game for the Dolphins.

Consistently in the backfield throughout Sunday’s game, Ogunjobi was a real problem for the Dolphins. However, his one missed tackle on the afternoon game in the backfield on a play he was in position to make for the TFL.

He does a fantastic job of splitting the gap between the right guard and center to get a free lane into the backfield to work downhill against running back Raheem Mostert. He just doesn’t quite have the foot speed to make the play behind the line of scrimmage, which allows Mostert to pick up an additional 13 yards.

Later on in the game in the second half, cornerback Levi Wallace and linebacker Myles Jack combined to miss tackles on Mostert, this time working as a receiver.

Lined up at the bottom of the screen, Mostert takes advantage of the clearout routes, working across the field on the slant route. Wallace has good coverage on the play, but is unable to finish the tackle at the catch point.

Jack then has a shot at Mostert, but he can’t get him to the ground, allowing Mostert to pick up additional yardage. From the point of contact with Wallace to where the play ends up, Mostert added another 12 yards, going from the 34 to the 22.

Finally, second-year safety Tre Norwood recorded the final miss of the game for the Steelers, and it came on him flying downhill into the flat against Miami tight end Mike Gesicki.

Norwood does a very good job of closing quickly here, getting off of the rub from the Miami receiver to get back downhill into the flat against Gesicki. He does everything right, but as you can see in the end zone view, he doesn’t bring his arms with him to the point of contact, instead going for a shoulder to Gesicki’s legs hoping to cut down the big tight end.

He mostly whiffs though, allowing Gesicki the opportunity to fight for extra yardage. Fortunately for Norwood, Minkah Fitzpatrick and Levi Wallace are right there to clean up the miss, hold Gesicki short of the sticks and force a punt.

Offensively, the Steelers — despite scoring just 10 points — had a really strong day overall in the forced missed tackles department against the Dolphins, forcing 11 misses, winning the tackle battle by a mark of +6, improving to 3-3-1 on the season in the game within the game.

For all the struggles with the run game in the Steel City this season, and the doubt that seems to be surfacing more and more lately regarding Najee Harris, the second-year Steelers running back continues to force a bunch of missed tackles each and every week.

That was the case Sunday night against the Dolphins, a game in which Harris forced a team-high six misses, giving him 24 total misses on the season.

Early on, he showed he was in rare form.

Taking a check down here from Kenny Pickett off of play-action, Harris forces two defenders to miss early in the rep, causing them to run right into each other with his move back towards the middle of the field. From there, he does a great job setting up another defender for a quick spin inside, forcing his third miss on the rep.

When the Steelers get him the football in space as a receiver, he’s very good at making defenders miss.

In the run game he ran hard and made defenders miss between the tackles, which is where he had a ton of success Sunday night.

Maybe that steel plate in his foot was affecting him more than anyone could have understood. He looks a lot better right now, and at least more decisive overall. I’d like to see him hit this hole a bit harder and really use his strength, but that’s a good job of pushing into the hole and then running through a would-be tackler for the 12-yard gain.