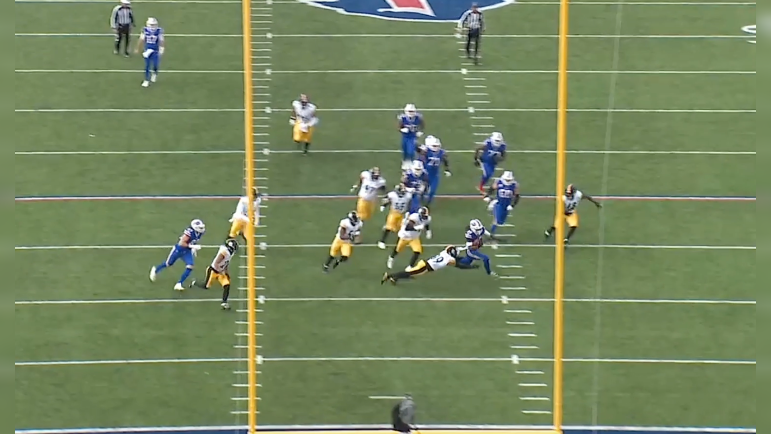 For the third straight week, the Pittsburgh Steelers struggled to tackle cleanly and consistently defensively, leading to yet another crushing defeat, dropping the black and gold to 1-4 on the season.

Dealing with a ton of injuries defensively certainly isn’t helping the Steelers tackle well, but on Sunday against the Bills, a number of key names dotted the missed tackles list, based on my charting.

Against the Bills, the Steelers secondary — already shorthanded due to injuries — really struggled to tackle on Sunday. Tre Norwood, filling in for Terrell Edmunds, tied for the team lead with Levi Wallace (making his return to Buffalo) for the most missed tackles in the 38-3 loss with two.

Minkah Fitzpatrick and Arthur Maulet also missed tackles in the loss, while Cameron Heyward recorded just his first miss of the season on a Josh Allen scramble. Overall, the missed tackles number from Sunday’s blowout loss isn’t as high as many would expect in a lopsided game like that, but it’s still a concern moving forward because when the Steelers miss double digit tackles throughout my years of charting this, they tend to lose much more often than they win.

That may be obvious, and I understand if people rolled their eyes and scoffed at that last sentence, but it’s worth noting. Missing tackles goes hand in hand with winning or losing with the Steelers.

After spending the last three seasons going against Stefon Diggs in practice each and every day, Wallace had a really tough time trying to get his former teammate on the ground in Sunday’s loss. Wallace missed on the second drive of the game on a screen to Diggs that the Steelers fortunately rallied to quickly.

However, his worst miss against Diggs will make Diggs’ highlight tape thanks to the nasty stiffarm he gave Wallace, throwing him to the ground on a short catch and run.

That about sums up how the day went for the Steelers.

In the second half, the Bills were again driving offensively when Norwood recorded his second miss of the game. HIs first one game on Devin Singletary’s long run down the left sideline, but his second one came in the red zone on an alert RPO on a bubble to backup wide receiver Isaiah Hodgins.

That’s a play that Norwood has to make, especially coming downhill in space. He’s been good at it recently, but came up small here against the Bills. Buffalo did a tremendous job of getting guys the football in space, stressing the Steelers’ secondary to make plays in space from a tackling perspective. Time and time again, they couldn’t do it.

Finally, on James Cook’s touchdown run to put the final nail in the coffin, Minkah Fitzpatrick missed just his second tackle of the season.

It looked a lot like the misses Fitzpatrick had in 2021 after being worn down trying to defend the run. Fitzpatrick certainly isn’t healthy and his battling a knee injury, but he missed in a major way here in space, allowing Cook to waltz into the end zone.

Ryan Anderson did a terrible job backside here opening up the cutback lane, but Fitzpatrick has to make that play in space coming downhill against the run. He’s made it time and time again this season, but he was’t able to on Sunday and it resulted in another six points for the Bills. That’s how the day went.

Jaylen Warren played extremely hard in Sunday’s loss, especially in the fourth quarter. Granted, the Bills had taken their foot off the gas at this point, but Warren continued to play hard, forcing three missed tackles in the final 15 minutes of action to finish with four on the day.

He was determined with the football in his hands late, dishing out punishment where he could.

He will never quit and will take advantage of every opportunity he gets. He truly is a bowling ball with the football in his hands. It’s remarkable to watch. He certainly adds a different element to the offense, at least at the moment, and deserves more playing time in non-blowout situations.

At receiver, Diontae Johnson is struggling to catch the football again. When he does though, he continues to make guys miss in space. He has elite level stop/start abilities and can destroy angles in the blink of an eye.