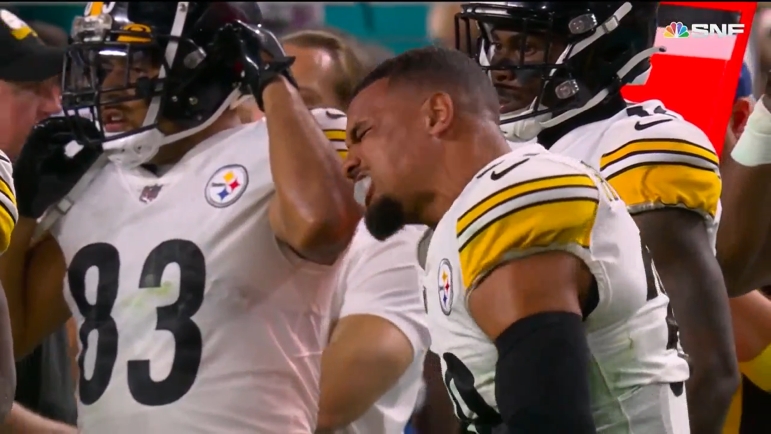 Neither team has been all that successful since then, but it’s been widely regarded that the Steelers, who acquired a two-time first-team All-Pro player out of the deal, but the better end. Fitzpatrick made his first trip back to Miami on Sunday night since that trade, and he played fired up.

That was perhaps best seen making a tackle on Dolphins tight end Mike Gesicki on third and long that kept Miami short of the chains early in the fourth quarter that forced a punt. It wasn’t necessarily a game-changing moment, but it was a quality open-field tackle.

Unfortunately, that was pretty much his highlight for the day, and one of the primary highlights for the Steelers’ defense as a whole. While they managed to keep the Dolphins out of the end zone for the entirety of the second half and held them to just 16 points (they did decline an opportunity to kick a field goal and go up by nine, the defense then stuffing them on fourth down), it proved not to be enough.

Part of the reason was because the offense wasn’t making enough plays, but it was also on the defense for the game reason. Nearly every defensive back aside from Fitzpatrick, for example, had a legitimate shot at securing an interception. None of them did.

According to a tweet from The Athletic’s Mike DeFabo, Fitzpatrick was pretty frustrated with the defense’s inability to come down with an interception or two in the loss.

Minkah Fitzpatrick on the dropped INTs: "It's frustrating when it's in our hands to make plays and we don't… When the ball hits two of your hands, you've got to catch it."

“It’s frustrating when it’s in our hands to make plays and we don’t,” Fitzpatrick stated to DeFabo after the loss. “When the ball hits two of your hands, you’ve got to catch it.”

This was the second time he had played his former team, in actuality. The Steelers played the Dolphins back in 2019 after the trade happened, and Fitzpatrick recorded two interceptions in that game in helping his new team record the victory.

He didn’t get it this time, nor did Brian Flores, who was the team’s head coach for the past three seasons. No, a week after taking down Tom Brady, the Steelers fell to a Dolphins team that looked very beatable going into the game, and looked very beatable during it as well, at least past the first quarter.

The blame doesn’t fall on Fitzpatrick, obviously, who finished the game with six tackles and a pass defensed, but he is one of the playmakers on this defense, needless to say, and this is a defense that just isn’t making many plays right now.

One hopes that they will only have to play one more game without star edge rusher T.J. Watt, but even he isn’t a cure-all. This offense is going to need help. Head coach Mike Tomlin came into this season touting his defense as being capable of doing whatever it is that they needed to do on any given day, but they haven’t done it in five of the past six games.