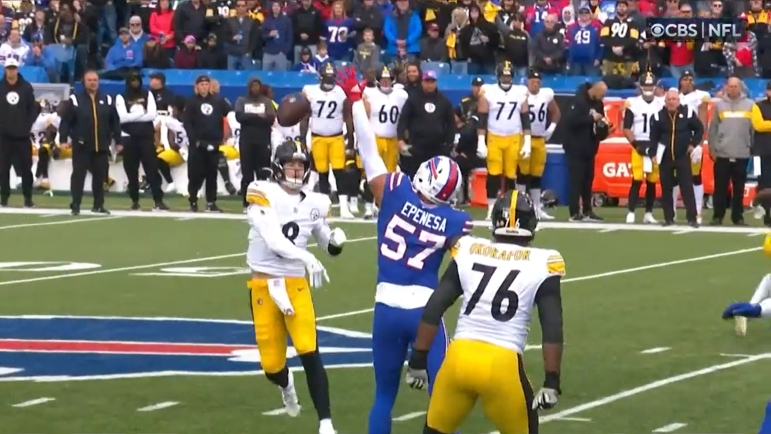 Pittsburgh Steelers quarterback Kenny Pickett threw 52 passes in his first career start on Sunday, among the highest totals in a player’s first start on record. Of course, it’s no longer uncommon for a quarterback to attempt that many passes in a game, but generally when it happens, it’s not a good thing.

It certainly wasn’t against the Buffalo Bills, as they did lose by 35 points. But while he was not critical of the play-calling, Pickett did express frustration over being in the position of being made one-dimensional by the game circumstances, and his head coach agreed in his post-game remarks yesterday.

“We’ve got to keep games closer”, he told reporters via the team’s website. “When you’re in games, you have everything on the menu at your disposal. When you’re not in games, you get somewhat one-dimensional, you get more predictable, play passes less effective, etc., etc., etc.”.

It’s a natural byproduct of getting ‘smashed’, as Tomlin said after the game. The Steelers only ran 18 plays on offense while trailing by fewer than two possessions, and 12 of those came on the opening drive. And they were already down 7-0 at that point. The offense never touched the ball without being down by less than a touchdown. And of course they were down by four touchdowns by halftime.

The simplest way of preventing your offense from getting one-dimensional is to stay in the game, to keep the score close. If you don’t have a dominant rushing offense, then you basically can’t run the ball when playing from behind by multiple scores, and the Steelers definitely don’t have that kind of rushing offense.

“It’s a global thing”, Tomlin said of the issue. “We understand that. To to make it an insurmountable obstacle, I’m not suggesting that. We’re very capable of correcting the things that are issues for us. But there’s a lot of variables at play when you’re talking about the question that you outlined”.

I don’t know whether or not the reporter in question was feeding off of Pickett’s post-game comments when asking this question to Tomlin, but I certainly wouldn’t be surprised. Yet at the same time, they threw the ball about three times more often than they ran the ball, so it also sticks out like a sore thumb.

Having an imbalanced offense is certainly not the way that this Steelers team as currently constructed is going to win games. Yes, they have talent at the wide receiver position, and they have pass-catchers at the other skill positions who can produce, as well. But if they can’t rely on the run game being a complementary factor, they’re not going to win, period. Not against any team with a degree of competence.