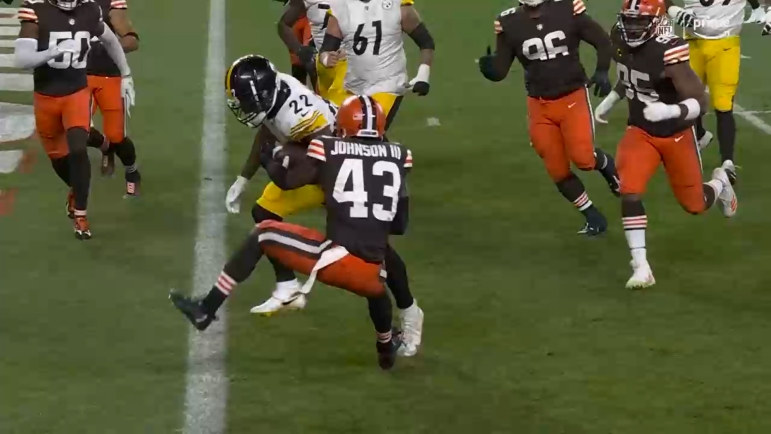 While it certainly isn’t close to being where it needs to be, the Pittsburgh Steelers’ running game hasn’t looked as bad as many of us thought it might three games into the 2022 regular season. On the heels of the Steelers’ running game producing 104 net yards in the team’s Week 3 Thursday night road game against the Cleveland Browns, head coach Mike Tomlin provided his updated thoughts on that phase of the team’s offense during his weekly television show.

“I thought the run game was better, and particularly in a hostile road game environment on Thursday night,” Tomlin told Bob Pompeani. “Again, we just didn’t get enough opportunities. We didn’t win enough possession downs on offense and Cleveland did. So, the time of possession was where it was and when it’s like that, and you don’t get enough snaps, it’s difficult for the run game to impact the game in the ways that it can. But I definitively saw signs of it, particularly in the second quarter of the football game.”

As Tomlin mentioned, the Steelers’ offense didn’t do a particularly good job of possessing the football on Thursday night against the Browns and that’s strongly reflected by the team’s 23:51 of possession time in that contest and the unit converting just one of nine total third down opportunities as well. However, in the second quarter of that Thursday night loss, the Steelers’ offense was able to rush for 49 yards on nine carries and two touchdowns. Running back Najee Harris was responsible for 27 of those yards and one touchdown on his second quarter carries. The Steelers had 20 total first downs Thursday night and six of them came via runs in the second quarter.

Entering Week 4, the Steelers’ rushing game has produced 270 yards and two touchdowns on 66 carries. As mentioned, 104 of those yards came on Thursday night against the Browns so that’s clearly where Tomlin’s optimism is rooted at. On Sunday, the Steelers’ offense will face a New York Jets’ defense that has allowed 316 rushing yards and three touchdowns in their first three games. That noted, opponents have averaged just 3.7 yards a rush against the Jets’ defense so far.

In addition to Harris getting his expected heavy workload on Sunday against the Jets, the same can probably be expected when it comes to his backup, rookie Jaylen Warren, who has rushed for 52 yards on 11 carries in the team’s first three games of the 2022 regular season. During his weekly television sit-down with Pompeani, Tomlin once again sang the praises of the team’s undrafted running back out of Oklahoma State.

“You know, I think he showed some things, what he’s capable of on Thursday night in Cleveland,” Tomlin said of Warren. “He’s going to continually grow and carve out a niche for himself.”

The Steelers need to carve out a win on Sunday against the Jets to keep from dropping to 1-3 on the season. If they are to win that game, it will likely come as a result of them having their best rushing output of the season and potentially in soggy conditions at Acrisure Stadium as well.