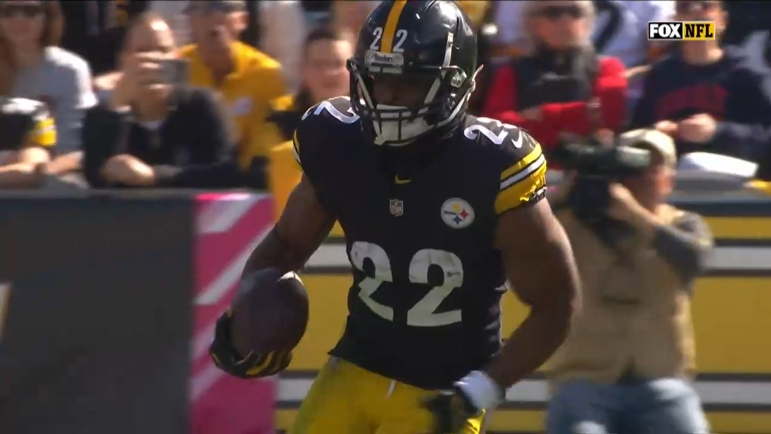 So far this season, Pittsburgh Steelers running back Najee Harris has been a little bit of a disappointment. Harris suffered a foot injury during training camp that clearly had an effect throughout the regular season, as Sunday’s win over the Tampa Bay Buccaneers was the first game where Harris played without a steel plate in his shoe. The Steelers’ offensive line, while better than expected, still hasn’t looked great in the run game, which has hurt Harris’ production as well. After Sunday’s game, he sat at his locker with pads on well after the end of the game, and Mike Tomlin said during his weekly press conference today that it’s part of Harris’ routine.

“That’s routine for him. Win or lose, he’s always the last out. He’s always reflecting and thinking about what transpired and trying to learn and grow from the experiences that transpired. He’s a young guy, but he’s still called to be a leader. He understands the gravity of where he is and the responsibilities that come with being him and he’s just always trying to get better and that’s just a component of his get better,” Tomlin said via the team’s YouTube channel.

Nobody wants Harris to perform better more than he does. I’m sure he’s putting more pressure on himself than anybody inside or outside the Steelers’ building. After a team-record-setting rookie year, he has just 264 yards on 3.2 yards per carry this year. Obviously, that’s not what the Steelers expected when they took him in the first round in 2021, and right now, it’s not good enough. But the injury obviously played a part, and not having a great run blocking offensive line doesn’t help. First-round running backs are supposed to be good enough to overcome sub-par blocking, but when you couple that with his injury, his decline in production makes sense.

He’s not getting as many yards per carry after contact (1.2 this season down from 1.9 last season) and he has just five broken tackles this year after reaching 30 last year. I don’t think Harris just fell off a cliff after his rookie year. I believe his foot injury is still bothering him to some capacity, and due to that he can’t produce after and run through contact as effectively as he was able to during his rookie year.

Harris is still a leader on this team, and he’s going to continue to get touches. He broke off some solid runs in the Tampa Bay game and finished with 14 carries for 42 yards. While those numbers don’t jump out at you, it’s definitely a building block for Harris for the rest of the season. It was the first game he played without the steel plate, and with Kenny Pickett potentially out on Sunday, it’s possible the team could lean more on Harris. While it’s been a slow start to the season, I think Harris is going to pick it up at some point now that he’s healthier than he was to start the year.