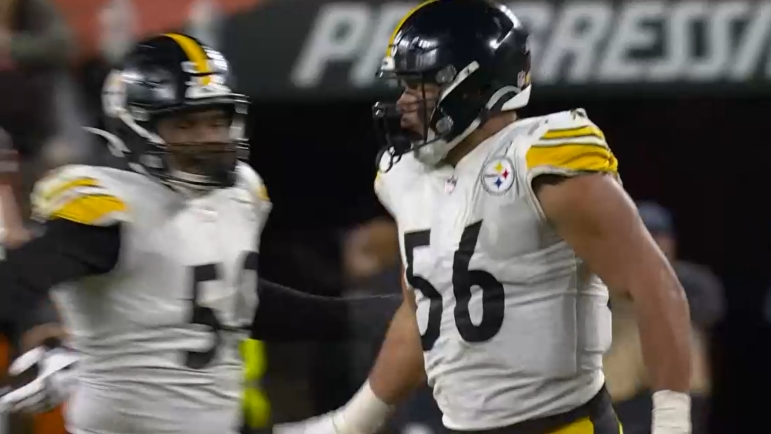 The Pittsburgh Steelers’ defense may be hamstrung in the absence of its star pass rusher, T.J. Watt, but the playing field is heavily neutralized when playing against the New York Jets, a team without its top three left tackles. With Mehki Becton and Duane Brown already on the Reserve/Injured List, the team added George Fant to the list this week.

Pittsburgh doesn’t have Watt at the moment, and won’t for at least one more game after today, but it still has the NFL’s current sack leader in Alex Highsmith, who has 4.5 through the first three games, and he will be going up against Connor McDermott, a sixth-year former sixth-round pick who has six starts in his career. Still, head coach Mike Tomlin isn’t taking anything for granted.

“You know, they’re playing with some backups at the tackle position”, he acknowledged, before going on to praise the quality of the Jets’ interior offensive line, speaking with Stan Savran on the Mike Tomlin Show.

“Their issues have been at the tackle position, but you’ve also seen some schematic from them to minimize that impact on the game”, he added, “the utilization of the tight ends that we mentioned as additional blockers in the play-action passing game being an example of that”.

New York did treat the tight end position favorably in free agency this offseason, signing C.J. Uzomah, formerly of the AFC North’s Cincinnati Bengals, and Tyler Conklin, the latter of whom in particular has been called into service to help out in pass protection.

That’s not something that they saw their previous opponent, the Cleveland Browns, do last Thursday, when Highsmith recorded a sack and a half. And with Watt still on the sidelines as he works his way back from a pectoral injury, teams will continue to focus on Highsmith.

The Steelers are still searching for answers with the pass rush help in Watt’s absence, defensive coordinator Teryl Austin acknowledged this past week, saying that they won’t be satisfied no matter what they see in practice until it shows up in games.

Malik Reed, a late trade acquisition, has been the primary replacement, with Jamir Jones and Delontae Scott also rotating in, but aside from the one-for-one position replacement, the defense has also expanded the 3-3-5 sub-package, allowing end DeMarvin Leal to play on the edge, sometimes even standing up.

In other words, Highsmith can expect to go up against not just McDermott, but also Conklin, and with frequent chips from the tight ends and running backs, and possibly even the wide receivers, as they look to keep their franchise quarterback, Zach Wilson, on his feet. Wilson is making his 2022 debut after missing the first three games due to injury, so they’ll be extra mindful.