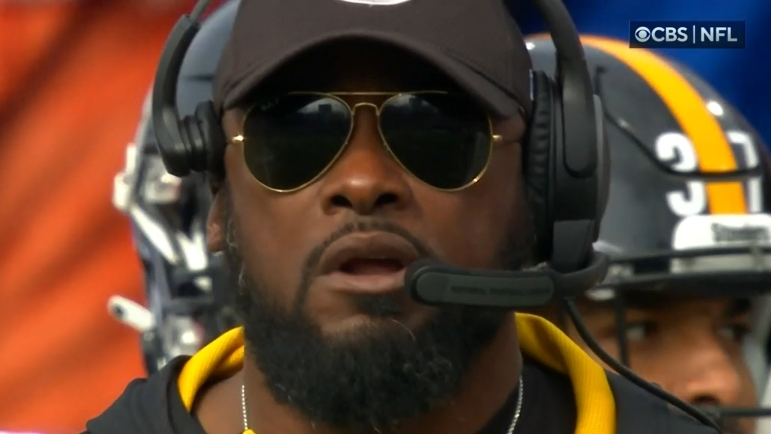 Whether the Pittsburgh Steelers went for it on fourth down, attempted a field goal, or did anything else, they weren’t beating the Buffalo Bills Sunday afternoon. But Mike Tomlin, famous for saying he doesn’t live in his fears, routinely waved the white flag today.

Twice against the Bills, once in the first half and again in the second half, Tomlin opted to kick field goals instead of keeping his offense on the field on fourth down. Both times, Chris Boswell’s field goal attempt pushed wide left, football justice if there ever was an example.

Speaking to reporters after the game, Tomlin defended and explained his decision to go for it.

“We got a penalty prior to that possession down and so fourth and long went to fourth and longer,” Tomlin said via the team’s YouTube channel. “I wanna be thoughtfully aggressive but I don’t wanna be stupid when we’re kicking our own butt, getting pre-snap penalties. I’m not gonna do that to [Kenny Pickett] or to them.”

Tomlin’s first decision came with 3:39 left in the second quarter. Trailing 24-3 and facing 4th and 5 at the Bills’ 15, Tomlin trotted Boswell onto the field. In windy conditions, Boswell’s kick kept wide left and Pittsburgh remained down three touchdowns.

The second highly questionable came at the end of a ten-play drive. Down 31-3, Tomlin initially kept his offense out for a 4th and 8. After a Dan Moore Jr. false start, Tomlin changed course and again sent Boswell out, whose kick again skimmed outside the left upright.

Pittsburgh didn’t show much fight today from a player or coaching perspective. Going for it on fourth down in either situation wouldn’t have changed the outcome, the Steelers were going to be blown out by the Bills, but it’s illogical to kick the field goal. Especially the first example in the first half when the game was — in theory — still up for grabs and the Steelers only faced 4th and 5 as opposed to 4th and 13 like what transpired in the second half. Scared money doesn’t make money.

While Tomlin rightly said the Steelers will be looking at addressing all levels of the organization, players and coaches, he’ll need to start by taking a look at himself first.