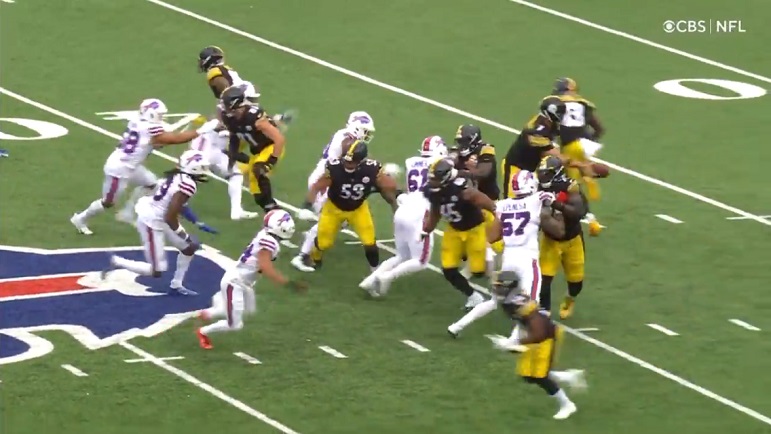 In the opening week of 2021, the Pittsburgh Steelers pulled off an upset, going into Buffalo and beating the Bills 23-16. Heading into Week 5, Pittsburgh is even bigger underdogs, as they sit at 1-3 and prepare to face a 3-1 Bills team considered by many to be Super Bowl favorites. On The Mike Tomlin Show, Tomlin talked about last year’s Week 1 win in the ramp-up to this week’s game.

Each of the last two years, it’s been a road game against the Bills. Tomlin also said you have to respect the environment in Buffalo.

“They’re a really good team. You gotta respect their environment and their fan base.”

The keys for the Steelers are going to be to generate pressure, force turnovers and not turn the ball over themselves. That’s usually how you win in the NFL, and that’s what has to happen for the Steelers to pull off the upset. Last year, Pittsburgh had Ben Roethlisberger at quarterback, and this year, it’ll have Kenny Pickett making his first career start.

While Roethlisberger was a proven winner and was able to find a way to win even when his physical ability wasn’t always there, Pickett is more athletic and might be able to do more with the ball to help the Steelers win. Still, even though he was diminished, having a guy like Roethlisberger was key for Pittsburgh to win that game last year. It’ll be interesting to see if Pickett will be able to do enough to help the Steelers win.

In the end, though, tomorrow is going to come down to defense. The Bills’ offense is high-powered enough that they could drop 50 points at any given time. The Steelers’ defense, even without T.J. Watt, has to be up to the task. So far, the lack of a pass rush has been detrimental and will be even more so tomorrow against Josh Allen if the Steelers can’t get to the quarterback. They have to find a way to make Allen uncomfortable and force him into a few mistakes. If Allen can settle in and make plays at will, it’s not going to be pretty for the Steelers.