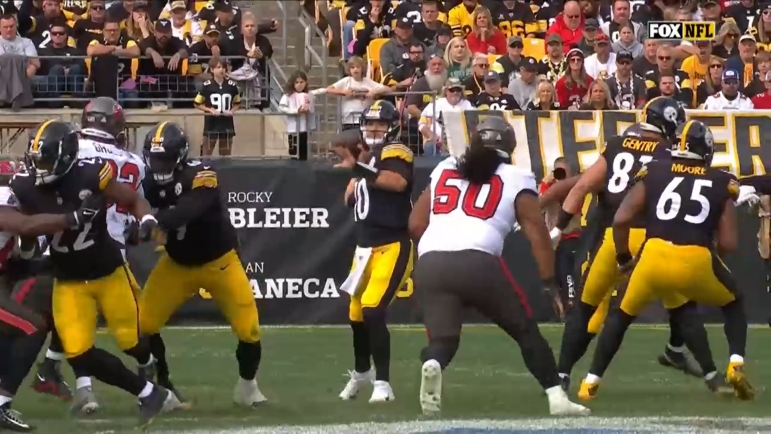 The Pittsburgh Steelers grinded out a big-time win Sunday against the Tampa Bay Buccaneers, defeating the road favorites by a score of 20-18. Pittsburgh managed to come away the victors in this game despite missing nearly their entire starting secondary due to injuries as well as losing QB Kenny Pickett in the second half due to a concussion.

Mitch Trubisky stepped in for Pickett and proceeded to have his best performance of the season coming off the bench compared to being a starter for Pittsburgh’s first four games of the season. Trubisky went 9/12 (75%) for 122 yards and a TD and carried the ball six times for five yards with a long on nine yards on the ground. He finished the outing with a QB rating of 142.4 in the upset win against the Buccaneers.

Trubisky in back in and finds Claypool for the TD!

Steelers up 8 on the Bucs 👀pic.twitter.com/rhQetmKC6u

Mike Tomlin took the stand in the postgame press conference to give his thoughts on the win and then opened up for questions to the media. When asked about Trubisky and his ability to step in when Pickett got knocked out of the game, Tomlin complimented his former starting QB for being ready when his number was called to step up when the team needed him to.

“I don’t know if it says anything that I didn’t already know as I got to know him throughout this process, man,” Tomlin said to the media in his postgame press conference which aired live from the team’s YouTube channel. “He’s been professional and class at every step of the way. That’s why I mentioned it repeatedly when you guys asked me about what is transpiring at the quarterback position. Not only him, but man, Mason Rudolph was engaged and got good ideas. Man, we are a collective man, and I just appreciate the unselfishness of all of those guys throughout this process. And that’s why I repeatedly bring it up.”

Trubisky wasn’t happy to get benched at then half of the Jets game back in Week 4, and who could blame him as this was his shot of making a case to the NFL that he could be a capable starting QB in this league after flaming out in Chicago and took a year in Buffalo behind Josh Allen before getting his shot in Pittsburgh. While the first four games didn’t turn out the way Trubisky and the rest of Steelers Nation hoped for, he came up in a big way this Sunday against a heavily favored buccaneers squad, beating the GOAT Tom Brady in what was likely his final appearance against the Steelers in his career after he has haunted Pittsburgh for over two decades.

It remains to be seen if Pickett will be able to return in-time for Pittsburgh’s game next week against the Miami Dolphins. Should he miss the game, Trubisky will have the opportunity to ride a hot performance into next week and make Tomlin and the rest of the Steelers organization think twice about putting him back on the bench when Pickett returns. That, or Trubisky may play himself in-position to get dealt to another team before the trade deadline if Pittsburgh remains focused on rolling with Pickett for the rest of the season and beyond.